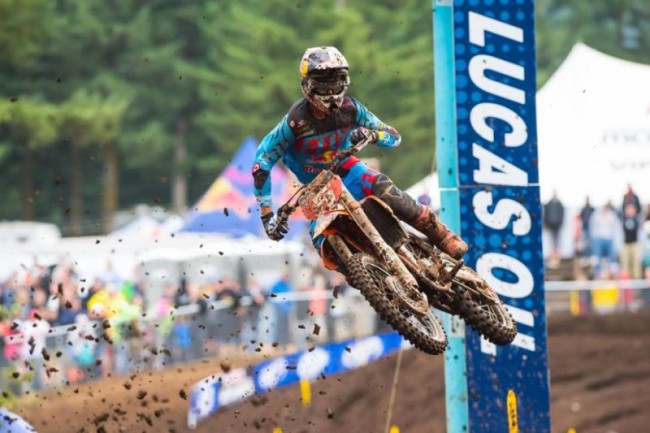 WASHOUGAL, Wash. (July 25, 2015) – Mother Nature played a major role at the ninth round of the 2015 Lucas Oil Pro Motocross Championship on Saturday, as a day of consistent rain provided unique and challenging conditions for the Peterson CAT Washougal National from Washougal MX Park. On an afternoon in which Autotrader.com/Toyota/Yamaha’s Justin Barcia looked to have the win in hand, Red Bull KTM’s Ryan Dungey was able to capitalize on a late mistake by Barcia in the final moto to claim his fourth overall win of the season via tiebreaker. In the 250 Class, Yamalube/Star Racing Yamaha’s Cooper Webb also needed a tiebreaker to earn back-to-back overall victories during an afternoon that saw another major swing in the championship point standings.

The afternoon kicked off with defending 450 Class Champion Ken Roczen putting his RCH Soaring Eagle/Jimmy Johns/Suzuki Factory Racing atop of the timed practice charts as the Bud Light Fastest Qualifier. However, when the gate dropped on the first moto it was Barcia racing to his sixth consecutive Motosport.com Holeshot Award, narrowly edging out his teammate Phil Nicoletti. Rockstar Energy Husqvarna Factory Racing’s Christophe Pourcel and Dungey rounded out the top five, while Roczen was left to fight his way forward from a start outside the top 10.

Barcia’s affinity for racing in wet conditions worked heavily into his favor early, as he opened a comfortable margin that would never relinquish. Nicoletti fended off Pourcel and Dungey for a few laps, but came under fire from both riders on Lap 4 and dropped two spots to fourth. Three laps later Pourcel received pressure from Dungey for second, and the points leader made an impressive pass for the position. Dungey quickly pulled away, eventually settling into the runner-up spot.

Barcia took his third moto win of the season with a flawless effort, 29.523 seconds ahead of Dungey. Pourcel followed in third, while Roczen managed to battle his way from an 11th-place start to finish seventh.

Rain-free skies greeted riders in Moto 2, setting the stage for a competitive race on increasingly improving track conditions. As has been the trend recently, Barcia put his Joe Gibbs Racing Yamaha machine up front off the start yet again, extending his Motosport.com Holeshot Award streak to seven motos, just ahead of Dungey and Smartop MotoConcepts Racing’s Vince Friese. Barcia and Dungey quickly established themselves out front, while Rockstar Energy Husqvarna Factory Racing’s Jason Anderson vaulted into third. Anderson’s time in podium position was short lived as a crash on the opening lap dropped him to ninth, allowing Roczen to take over third.

The lead trio checked out on the field and sat within a handful of seconds of one another for the majority of the moto. Dungey put the pressure on Barcia for several laps, but was unable to get enough momentum to attempt a pass. As the moto wore on, Barcia maintained a torrid pace that allowed him to gradually extend his lead over Dungey, who consistently distanced himself from Roczen in third.

Barcia appeared to have his third overall win in the last four rounds within reach, but he carried too much speed into a downhill, off-camber turn with four laps remaining and briefly tipped over as he attempted to correct his direction. That allowed Dungey to make the pass for the lead, while Barcia resumed with the KTM rider still in sight. Barcia put forth a relentless effort to try and catch Dungey, but made a couple more mistakes before settling into the position. Dungey crossed the line 6.757 seconds ahead of Barcia, with Roczen finishing a distant third.

Dungey (2-1) and Barcia (1-2) finished the afternoon tied for the overall win, but by virtue of his second moto victory Dungey earned the tiebreaker, making him the most successful rider in history at Washougal MX Park with seven career wins (combined 450 Class and 250 Class). Pourcel rounded out the overall podium in third (3-5).

“I didn’t have the best practice, but we got a decent start in the first moto. I was able to make some quick passes but there weren’t a lot of lines to make passes. By the time I got into second Barcia was gone,” explained Dungey, who has won five of his six 450 Class starts at Washougal. “I got another good start in the second moto but couldn’t make the pass on Barcia because he’s riding so good right now. I lost some ground when we hit lappers, but I was able to make up some ground again, then he made a mistake that allowed us to take the win.”

Dungey’s lead in the championship standings now sits at 69 points over Barcia and Roczen, who now sit in a tie for second.

“I think it was a good day, for sure. I’ve gotten starts down so it feels good,” said Barcia. “The first moto was great and we won pretty comfortably. The second moto was a barnburner. I could tell Ryan [Dungey] was behind me, but I was able to keep him behind me and still ride my lines. Then I pretty much just blew it in one turn and gave it away. It hurt [to not win] today. This was the hardest loss for sure because I felt like I had this one, but it was still good.”

The 250 Class got underway with reigning champion and points leader Jeremy Martin posting the quickest lap of timed practice to earn the Bud Light Fastest Qualifier aboard his Yamalube/Star Racing Yamaha. However, that advantage didn’t work out to his favor in the first moto as GEICO Honda’s Christian Craig earned the Motosport.com Holeshot Award ahead of his teammate RJ Hampshire, Yamalube/Star Racing Yamaha’s Cooper Webb and Red Bull KTM’s Marvin Musquin. Martin, who entered the race with a 19-point lead on Musquin in the championship, started outside the top 10 and crossed the line to complete the opening lap in 16th.

With a clear track ahead of him, Craig quickly opened a margin of over five seconds on the field but crashed out of the lead on Lap 2 when he tucked his front end and fell over. That mistake allowed Webb to take control of the moto, with Musquin second and Monster Energy/Pro Circuit/Kawsaki’s Arnaud Tonus taking over third in his first start of the season. Craig returned to action in fourth.

The top three riders sat within a few seconds of one another for the majority of the moto, but Webb and Musquin soon pulled ahead in what became a thrilling showdown for the win. As the leaders encountered lapped traffic, Musquin closed in on Webb’s rear fender and was able to make an aggressive pass for the lead on Lap 10. Webb then removed his goggles, enabling him to continue the fight for the position. Musquin was forced to remove his goggles as well after losing ground to Webb, with the battle reaching its pinnacle on the final lap. With less than a bike length between the top two, lapped riders forced Webb to alter his line in the slowest part of the track, almost sending him to the ground and allowing Musquin to open a small gap that he carried through to the finish. Webb was second, 2.305 seconds back, with Tonus hanging on for third. Martin managed to work his way into the top 10, finishing ninth.

The rain halted heading into the final moto, providing improved conditions. Knowing his points lead was on the line, Martin seized the opportunity to put his Yamaha up front in Moto 2 and grabbed the Motosport.com Holeshot Award ahead of Webb, FMF/Orange Brigade KTM’s Daniel Baker and Musquin. With the overall win within reach, Webb attacked Martin immediately for the lead and took control of the moto on the opening lap. Musquin asserted himself into third shortly thereafter and looked to pressure Martin for second.

Webb established nearly a three-second lead after the completion of the first lap, but Martin slowly chipped away at the deficit and less than a second separated the teammates when the moto reached its halfway point. The Yamaha duo paced one another with near identical lap times and the distance between them stabilized before Webb picked up the pace in the late stages of the moto. As soon as Webb appeared to have the upper hand Martin fought back, and when the two riders hit lapped traffic Martin took advantage of an opportunity to make a pass and snuck by at the slowest section of the track.

With just a few laps remaining Martin crashed out of the lead and lost multiple positions as he attempted to restart his Yamaha. Webb reclaimed the lead with Musquin charging hard in second. Martin resumed in fourth, but quickly passed his rookie teammate Aaron Plessinger to move into third. Webb capitalized on Martin’s late error to take the moto win by 5.063 seconds, with Musquin finishing off a good day in points in second. Martin recovered to finish third.

“The day was good and we were able to make some good changes after practice that really helped,” said Webb. “I got a good start in the first moto and led most of it, but had a goggle issue that allowed Marvin [Musquin] to get around me. We came up short there, but got another good start in the second moto and made our way around Jeremy [Martin] early. He was able to get around me, but made a mistake that put us on top of the box. I feel like I’ve been a competitor every race and I’m proving I can win.”

“It felt good to be myself today. The last two races have been tough with my [injured] wrist, but this week was really great and I came into Washougal with a lot of confidence,” said Musquin. “I went 1-1 here last year and I wanted to do that again today. The first moto was tough because it was easy to make mistakes, but I was able to win. In the second moto I made too many mistakes early, but we finished second and it ended up being a really good day for the championship.”

The Lucas Oil Pro Motocross Championship will observe its final break in action next weekend before hitting its three-round stretch run to close out the 2015 season. Legendary Unadilla MX in New Berlin, New York, will host the Red Bull Unadilla National on Saturday, August 8.