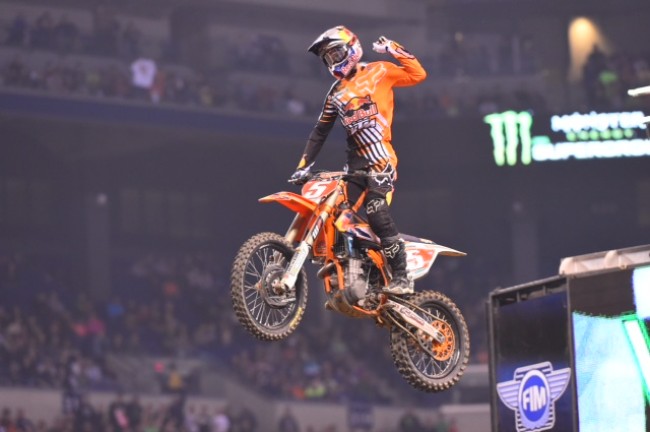 Andrew Short put his BTO Sports.com/KTM across the SupercrossLive.com Holeshot Award line before Dungey and Team Honda HRC’s Cole Seely to start the 450SX Class Main Event. Discount Tire/TwoTwo Motorsports’ Chad Reed, who captured his first win of the season at the first race in Atlanta, crashed in Turn 2 and remounted in last place.

Dungey moved into the lead on Lap 1 as Seely took over second place. Tomac, who came into tonight in third place, crashed on Lap 1 and lost several valuable positions. On Lap 2, Autotrader.com/Toyota/Yamaha’s Weston Peick passed Short for third place.

Team HRC’s Trey Canard charged through the field, eventually passing Peick for third place on Lap 10. Canard held on for third place, his seventh podium finish of the season.

Seely earned a season-best second place finish and moved into fourth place in the season standings, up from seventh place.

“I thought I would have something for Ryan [Dungey] tonight, but I dropped back a bit, but I will take a second place,” said Seely.

With a 45-point lead in the season standings, Dungey has five wins on the year and is the fifth rider in history to win back-to-back races in Indianapolis. In the 23 races held in Indianapolis, the winner of the race has gone on to win the 450SX Class Championship 17 times.

“This is a week-by-week battle,” said Dungey. “I knew how important the start was, and Andrew [Short] was up front early on, so I knew I had to get around him,” said Dungey. “It was a tough track; on the last lap, I took it nice and easy.”

While riding in second place on Lap 1, Davalos crashed and dropped several positions. On Lap 2, Davalos would crash again, and at the halfway point of the race, he was running in 19th place.

On Lap 9, Monster Energy/Pro Circuit/Kawasaki’s Joey Savatgy, who was running in third place, suffered mechanical failure and was forced to withdraw from the race. Savatgy came into tonight in fourth place in season standings.

Rookie RJ Hampshire earned the first podium of his career with a third-place finish. Hampshire advanced into fourth place from sixth place in the season standings.

“I came into the season with the goal of making every Main Event, so to be on the podium is a great accomplishment,” said Hampshire.