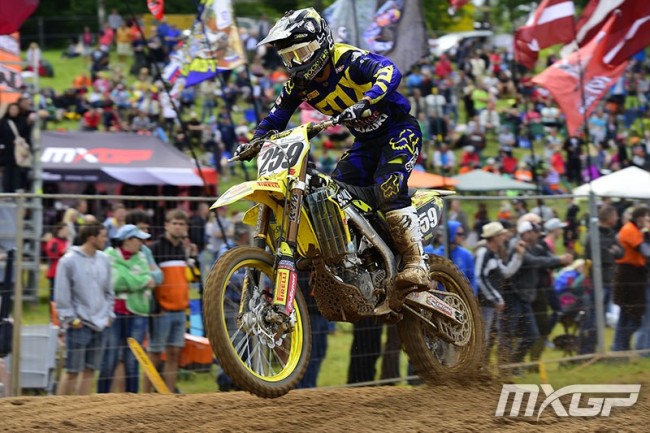 KEGUMS (Latvia), 12 July 2015 – Round twelve of the FIM Motocross World Championship was a test of versatility today with temperamental weather and fickle track conditions playing a huge part in the overall results. The day was a battle against the elements but as it turns out it may have been the combination of rain, sunshine and greatsoil here in Kegums that encouraged the blooming of Rockstar Energy Suzuki Europe’s Glenn Coldenhoff and Monster Energy DRT Kawasaki’s Max Anstie.

A new generation of future legends is starting to emerge. Rockstar Energy Suzuki Europe’s Glenn Coldenhoff hit a huge milestone today in Kegums when he claimed his first two Fox Holeshots of the season and his first race win, which he combined with a second place finish for his first ever MXGP overall. Amazingly, the kid known as The Hoffis the first MXGP round winner for Suzuki this year despite the brand tenting two of the most distinguished riders in MXGP, Kevin Strijbos and Clement Desalle.

Team HRC’s Gautier Paulin was expected to do well here after his unforgettable performance at the 2014 Monster Energy FIM Motocross of Nations. In race one the Frenchman made life difficult for himself with a bad start, he said “I had a bad start in the first moto and by time I was up to the front Glenn and Kevin were gone, so I just stayed on an easy pace because the riders behind me were quite far too.” Another average start in race two had GP21 at a handicap again, nevertheless the Frenchman managed to surge his way up into third and in doing so set the fastest lap time of the weekend for his second point in the TAG HEUER Fastest Lap competition.

The speed in which Yamaha Factory Racing Yamalube’s Romain Febvre is maturing as a rider in MXGP is mind blowing. In race one it looked as though the red plate holder was down and out after being taken down at turn one. If that wasn’t bad enough, the Frenchman’s bike took forever to start, so he lost thirty seconds right off the bat. Where a lot of riders might have thrown in the towel, Febvre just put his head down and started peeling off laps as fast as he could. Despite being in traffic for the entire race, he set the fastest lap time and managed to finish in an impressive eighth. In addition to that remarkable effort, race two saw him take the lead on turn three and blitz everyone for his seventh race win and seventh consecutive podium finish of the season.

It was a mixed day for Rockstar Energy Suzuki World MXGP’s Kevin Strijbos who illustrated the importance of a good start. The Kid got a great start in race one and chased his fellow Suzuki rider Glenn Coldenhoff home for second. Race two painted an entirely different picture for the Belgian as he had to fight his was through the pack to salvage sixth which left him 1 point shy of the podium.

Total respect must be given to Red Bull KTM Factory Racing’s Antonio Cairoli who managed to finish in the top five despite the suffering he is experiencing with his broken elbow.

This weekend was a testament to Monster Energy DRT Kawasaki rider Max Anstie’s ability to ride sand. Anstie grew up racing in the renowned sand of The Netherlands and has always claimed he is one of the best sand riders in the world although he openly admitted that had Red Bull KTM Factory Racing’s Jeffrey Herlings been on the line this weekend, it wouldn’t have been easy to achieve what he did, “Jeffrey is an amazing rider, he is not the world champion for nothing,” the Brit said. At the end of the day, Herlings was not on the line this weekend and it was Anstie who stepped up to the plate and creamed everyone in all three races, qualifying and both main events for his first overall grand prix win of the season.

Red Bull KTM Factory Racing’s Pauls Jonass had the fans booming this weekend as he led laps and put in two solid second place finishes for second overall. The hometown hero said “since I was small on my 85cc bike it was always my dream to stand on the podium at a grand prix in Latvia. My fans were so loud, I did feel the pressure but it was fun and I can’t thank everyone enough.”

Wilvo Nestaan Husqvarna Factory Racing’s last minute replacement rider Harri Kullas was the dark horse and the surprise performer in MX2 this weekend. Nobody could wipe the smile off of the Finnish rider’s face when he landed on the podium for the first time in his career.

From winning the EMX250 round of Latvia here in 2013 Rockstar Energy Suzuki Europe’s Jeremy Seewer has made solid progress in his transition to the premier championship. This weekend the super fast Swiss rider finished fourth and fifth for fourth overall.

Meanwhile Honda Gariboldi’s Tim Gajser had to make the best of a bad situation in race one after being taken down at turn one. The Slovenian managed to bounce back for sixth in that race which he followed up with a fifth in race two to round out the top five.

As for the local hero, HSF Logistic Motorsport Team’s Roberts Justs lives so close to Kegums he could go home and make a sandwich in between races if he wanted to. The Latvian struggled with nerves over the weekend, which left him finishing his home grand prix in thirteenth overall.