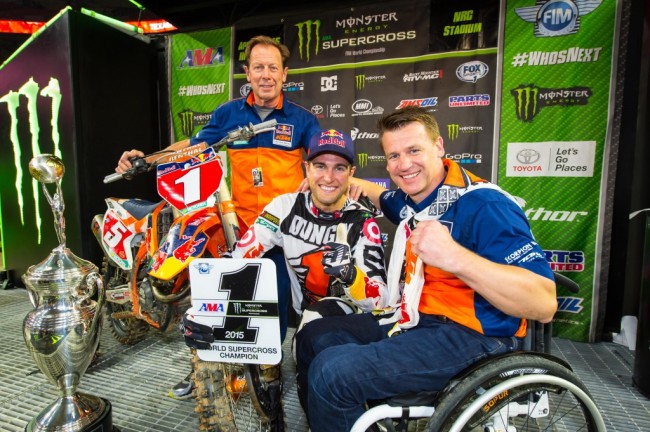 HOUSTON (April 11, 2015) – Monster Energy AMA Supercross, an FIM World Championship, traveled to NRG Stadium on Saturday in front of 48,024 fans for the 14th stop of the 17-race season. On a night in which Team Honda HRC rookie Cole Seely earned the first win of his 450SX Class career, it was Red Bull KTM’s Ryan Dungey who stole the spotlight, following Seely across the line to secure his second championship with three races remaining. Yamalube/Star Racing Yamaha’s Cooper Webb had a similar opportunity in the return of the Western Regional 250SX Class Championship, and the sophomore rider did so in style, winning his fifth Main Event in seven races to clinch the first title of his professional career with one race to go.

BTO Sports KTM’s Andrew Short’s prowess for stellar starts continued as he raced to the SupercrossLive.com Holeshot Award to start the 450SX Class Main Event ahead of Discount Tire Racing/TwoTwo Motorsports’ Chad Reed and Seely. The Honda rider wasted little time in making his move and passed both Reed and Short on the inside through the first series of jumps to assume the lead and sprint away. Dungey found himself mired deep in the top 10, alongside his main championship rival Eli Tomac and his GEICO Honda.

Seely took full advantage of a clear track to open what quickly became an insurmountable lead, but the battles behind him lasted the entirety of the 20-lap race. Reed took over second from Short on Lap 3 and was followed by Rockstar Energy Husqvarna Factory Racing’s Jason Anderson, who took over third on Lap 6. Both Dungey and Tomac made little progress throughout the first half of the race, but after contact between Reed and Anderson took both riders down while battling for second, Dungey and Tomac started to assert themselves,

Dungey battled his way into the top five and broke into podium position by passing Discount Tire Racing/TwoTwo Motorsports’ Josh Grant on Lap 11. Two laps later he passed Short for second, while Tomac started to pressure Grant for fourth. Tomac’s march to the front put him into a podium spot on Lap 16 after passing Short, and he was able to keep Dungey within striking distance.

Seely was never pressured out front and led all 20 laps to become the 59th different winner in 450SX Class history. He also became the sixth different winner of the 2015 season, signifying the first time the championship has had that many riders stand atop the podium since the 1998 season.

“It’s unreal. I just tried to charge as fast as I could through the first 20 laps and open as big a lead as I could,” said Seely. “It was surreal because I had such a big lead that I could cruise. I just did what I know how to do best and put down heaters [fast laps] when I needed to. Once I did it was relatively easy from there.”

Dungey’s runner-up finish was his 13th consecutive podium result of the season and enough to clinch his first title since winning as a rookie during the 2010 season. The championship also signified the first for KTM in the 450SX Class.

“To win in 2010 was awesome, but this time I felt we really earned it and deserved it,” explained Dungey. “It’s hard to know what to say, there’s just so much running through my mind right now. KTM brought me here four years ago to win a championship and we finally accomplished it. I pictured tonight going a little differently in my mind, but we caught a few breaks and kept it on two wheels. We had to work for it tonight.”

Tomac completed the podium in third. Dungey and Seely remain atop the 450SX Class championship standings, while Seely’s win moved him into third.

The Western Regional 250SX Class Main Event began with GEICO Honda’s Matt Bisceglia grabbing the SupercrossLive.com Holeshot Award just ahead of Troy Lee Designs/Lucas Oil/Red Bull/KTM’s Shane McElrath and Webb. McElrath was able to make a move on Bisceglia to take over the lead, while Monster Energy/Pro Circuit/Kawasaki’s Tyler Bowers passed Webb to assume third. Bowers entered the night as Webb’s primary challenger in the championship, but he was only able to keep his rival at bay for a couple laps before Webb took over third. Not long after, Bowers pulled off to record a DNF.

On Lap 4 Webb’s pursuit of victory carried him past Bisceglia for second. As he looked to keep pace with Webb, Bisceglia crashed out of third, handing the spot to Yamalube/Star Racing Yamaha’s Aaron Plessinger. Out front, Webb slowly closed in on McElrath and a battle for the lead on Lap 9, with Webb gaining the advantage and seizing control of the lead. Once he got into the top spot Webb pulled away for the win to put an exclamation point on his championship-winning effort.

McElrath overcame a trip through the Last Chance Qualifier (LCQ) to earn his second straight runner-up finish, tying a career best. GEICO Honda’s Malcolm Stewart also battled from an LCQ visit and an 11th-place start to round out the podium in third after passing Plessinger for the position on Lap 11.

“This is unreal,” exclaimed Webb. “I dedicated my whole life for this moment right here and it paid off. I was a four-year-old chasing a dream and it came true. I put my head down [after finishing seventh at the first race of the season] because I knew I wasn’t a seventh place guy. I knew I belonged up here so I never quit. I kept fighting and here we are.”

Webb is now followed in the Western Regional 250SX Class championship standings by Rockstar Energy Husqvarna Factory Racing’s Zach Osborne, who assumed the spot after a seventh-place finish, and McElrath, who moved into third.

Monster Energy Supercross continues next weekend with its 15th stop of the 17-race season and its inaugural visit to Levi’s Stadium in Santa Clara, California. Live broadcast coverage on FOX Sports 1 begins at 7 p.m. PT / 10 p.m. ET on Saturday, April 18.