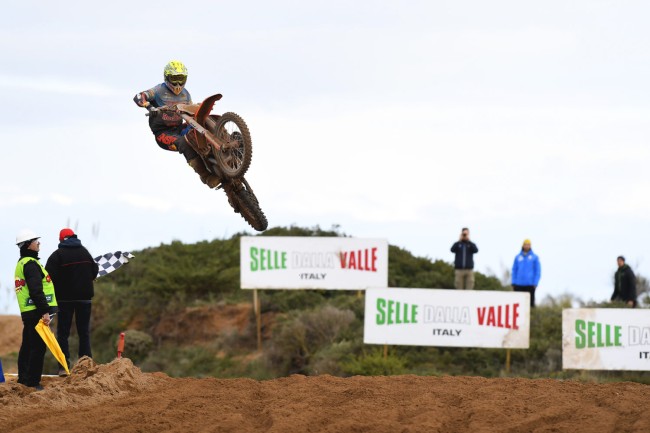 The 2018 racing season has been officially opened today in Riola Sardo. After two windy and rainy days, finally the nice weather arrived and the 105 riders, divided in three categories, could race spectacular and exciting manches in front of about 5.000 spectators coming from allover the island. Great success also for the live streaming on Facebook and on the website that scored more than 200.000 views during the day.

After having realized the 24MX fast lap in the timed practice, Antonio Cairoli takes also the Just1 Holeshot in the MX1 race. From that moment the World Champion made a lonely ride till the chequered flag. Behind him, a consistent Max Anstie, while Jeremy Van Horebeek takes the lowest step of the podium at the last lap, passing Paulin Gautier. Fifth and sixth classified respectively Romain Febvre and Shaun Simpson, in front of the old lion Tanel Leok. Great debut in MX1 for Jeremy Seewer, who gains the eighth position during the last laps against Alessandro Lupino. Top ten is completed by Arminas Jasikonis, at his debut on Honda. At the start, one of the protagonists went out of the race: Jeffrey Herlings felt down at the first corner. A contusion for his shoulder made him go directly to the box.

First official race even for the MX2 protagonists on the spectacular Sardinian circuit. The best one has been the Australian rider of Honda, Hunter Lawrence, who raced aggressively, paying attention to the difficult sand of Riola. At the second place a great Pauls Jonass, had to recover positions after a mistke in the first part of the race. It’s not easy to pass on this circuit, mainly used for trainings, but the 2017 MX2 World Champion did not give up on his KTM Factory and gained a very important result, that keep him among the fighters for the Internazionali d’Italia Title. The podium has been completed with the Honda HRC rider Calvin Vlandereen, while the Just1 Holeshot gained by the young Danish Mikkel Haarup, at his debut on 250.

It wouldn’t have been for two laps, at half race, when Cairoli reduced the pace, allowing Anstie and then Febvre to pass him, the story of Supercampione Final will have been the same of MX1 race. The nine times World Champion has leaded since the start, winning the Just1 Holeshot and racing on a pace, impossible to keep for everyone else. After the first two corners, Cairoli had already created the gap respect to his followers: Max Anstie, Van Horebeek and Febvre. At half race his advantage was already consistent, but Cairoli reduced his rhythm till to be third in a short time, behind the new leader Max Anstie and Romain Febvre. The alarm was promptly solved, when Cairoli begins again to race at full rhythm and newly takes the lead in two laps, going fast towards the final victory.
Max Anstie, thanks to his speed and great feeling with the bike, confirmed himself overall second placed. Behind him the two Yamaha Rinaldi mates: very determined was Febvre, third classified, followed by Van Horebeek in fourth position. Fifth place for Paulin Gautier, after a difficult start, while the MX2 first rider is Pauls Jonass, who finished in sixth position.

The youngest riders on two strokes bikes made show on the sand in Sardinia. Mattia Guadagnini won the overall classification, demonstrating to his good feeling with his Husqvarna. The Maddii racing Team rider gained the second position in the first race and won the second manche. Another Italian rider, Emilio Scuteri, from KTM Celestini Junior Team, was second placed with the same points (after a first and second classified in the two manches). The two riders fighted during both the finals: during the second one Scuteri was leader before Guadagnini passed him and took the overall victory. The Yamaha Dutch rider Tick Elzing jumped on the third step of the podium, while the surprising Alberto Barcella won the Just1 Huleshot.