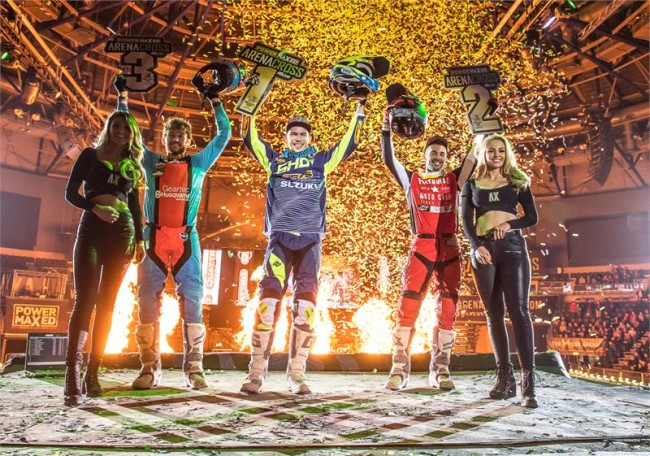 PR- The back-to-back rounds four and five of the 2018 Power Maxed Arenacross Tour at The SSE Arena, Belfast, kept an enthusiastic and screaming crowd on its feet this evening in heart-stopping style.

Contact galore in the Pro class with hard, sharp and classic Arenacross racing. A Brit on the podium. A Pro Lite in the Main Event and, an incredibly unscripted set of Freestyle top tricks, were the order of the night.

The fans turned out in their thousands for the second night of AX at the SSE Arena sited within the waterfront Titantic Quarter. They were out to be entertained and, from the very off, Arenacross delivered with t-shirts flying left, right and centre, the craziest of Mexican waves and the biggest flames of the Tour to date.

The Pro class eliminator was nothing short of a battle of attrition with plenty of surprises and hard racing tactics thrown into the mix. Former British MX champ Elliott Banks-Browne (Geartech Husqvarna), German supercross star Nique Thury (MVR-D Husqvarna) and Pro Lites front-runner Joe Clayton (Team Green Holeshot Kawasaki) made it through to the final, whilst Welshman Ashley Greedy (Team FRO Systems) won the vote of the people for the second week running.

After the head-to-head carnage, the Main Event seemed relatively calmer. Banks-Browne had a great start but was quickly passed by reigning AX champ, Frenchman Thomas Ramette (SR75 World Suzuki). Last night’s winner, MVR-D St Blazey Husqvarna’s Adrien Escoffier from France, was right up there in the mix and, current red plate holder Cedric Soubeyras (Team FRO Systems), recovering from a poor start, was carving his way through the pack. At half-race distance, Aussie ace Dan Reardon (I-Fly JK Yamaha) made a move on Banks-Browne and held it to the chequered flag. Ramette was victorious and, in the process, clawed his way back up the championship leader board to within two points of Soubeyras. Reardon finished second and Banks-Browne claimed his first podium of the season. Clayton earned eight championship points to put him 17th overall in the championship stakes, from just one race.

The Pro Lites class featured a popular home-town lad in the form of I-Fly JK Yamaha’s Jason Meara. His determination to win in front of a partisan crowd was evident, however, he had super-fast Clayton and Chris Bayliss (Wooldridge Demolition) to contend with. He put in solid performances to consolidate a third overall position in the championship and keep in contention. The overall was taken by Clayton with Bayliss in second.

In the Youth classes, Carl Osterman again cleaned up in the Supermini group and Jake Davies in the 65cc category. Buster Hart sill retains his lead in the Superminis and Harvey Antrobus has a single point advantage over Shaun Mahoney in the 65s.

The 2018 Power Maxed Arenacross Tour now takes a week’s break before travelling to the FlyDSA Arena in Sheffield on Saturday the 10th of February.

Tickets are available via www.arenacrossuk.com