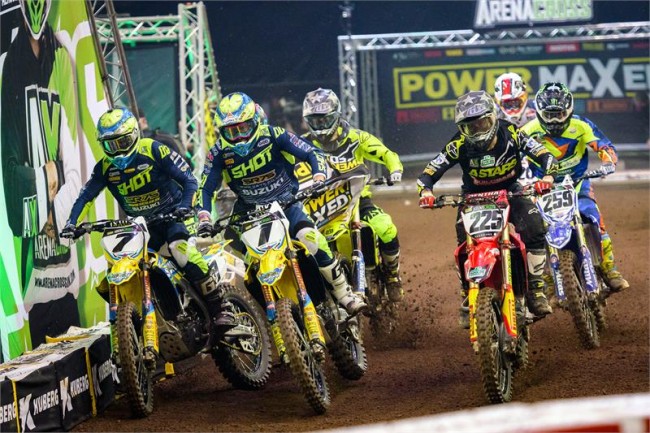 PR-The first of the two-leg 2018 Power Maxed Arenacross Tour stopover at The SSE Arena, Belfast, was an intense affair, with ultra-close racing across all classes, a regrouped FMX crew, shooting stars, lights, lasers and a good dose of oomph to fire up a cold and damp January evening.

The atmospheric opening ceremony had the Belfast crowd enthralled, as did the following unscripted FMX set. Unfortunately, when putting it all on the line, ultra-popular AX FMX star Samson Eaton landed badly and suffered a leg injury – he may be out of action for a while but, there’s little doubt that he’ll be back whipping-fit as soon as he is able to do so.

Ahead of the Main Event, the last chance qualifier head-to-head eliminator was like no other. It oozed drama with full-on bar-bashing contact, machine-mounting spinning, rider blocking and pile-ups galore.

The Pro class racing was nothing other than testosterone-fuelled. The challenging track featured the longest start straight of the series to date with a tight first turn that, as predicted by the AX hosts, claimed a few racing casualties. Individual mistakes across the board made for an interesting Pro main event which saw reigning champ Thomas Ramette (SR75 World Suzuki) storm away from the start gate, only to slip on that notorious first corner at third-race-distance and create a massive bottle neck which halted the charge of Aussie Dan Reardon (I-Fly JK Yamaha) and SR75 team-mate Cyrille Coullon. This left the way clear for MVR-D St Blazey Husqvarna’s French rider Adrien Escoffier to blast through to the front of the pack, swiftly followed by the UK’s Matt Bayliss (Wooldridge Demolition), who had a hard-charging Russian, in the form of RFX Suzuki’s Evgeny Bobryshev on his tail. An on-form Bayliss had been at the front of the race from the start, but then fell foul of that first corner a few laps later, leaving Bobryshev to take advantage, keep Coullon at bay, and charge his Suzuki to the finish line in second and secure his first podium of the series.

Local hero Jason Meara (I-Fly JK Yamaha) rode his heart out in the Pro Lites in his endeavour to win the class in front of his home crowd. He tussled hard with his closest rivals Joe Clayton (Team Green Holeshot Kawasaki) and Chris Bayliss (Wooldridge Demolition) but circumstances were against him. He may not have won the race, but he was a clear winner with the partisan crowd who brought the roof down with their cheers of support for their home town hero.

The racing was as competitive as ever in the Youth ranks. German rider Carl Osterman outperformed the opposition with two start-to-finish wins but the British riders battled hard behind him. Buster Hart took two second places to retain his championship lead and, one of the smaller riders of the bunch, Raife Broadley secured third. In the Youth 65cc group, the youngest rider of the AX Tour, Zane Stephens, show the rest of the class his rear wheel with a solid win which catapulted him to joint second in the championship.

The fifth round of the 2018 Power Maxed Arenacross Tour returns to The SSE Arena, Belfast on Saturday the 27th of January. Tickets are available from the Arena website www.ssebelfastarena.com or by calling 02890 739074. They’ll also be on the door right up until 7.15pm. Prices start from £17.