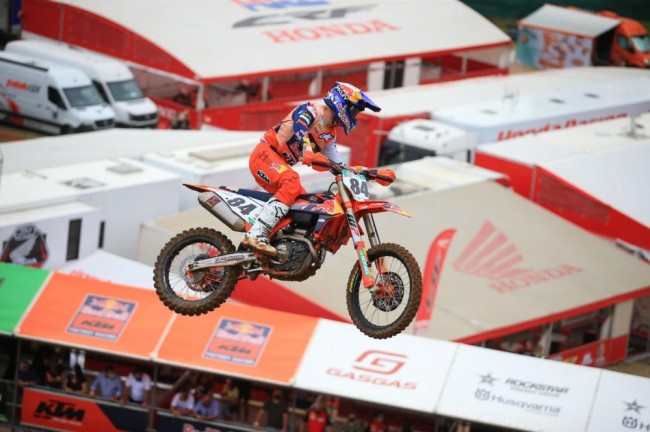 Intense precision! That was the summary of a nerve jangling MXGP class as all the title contenders battled in both motos at a slick and very rutted and one-lined Turkish GP.

A perfectly timed late race charge from Herlings saw him pass Febvre and leader Prado to win race one as Gajser struggled with arm pump to take sixth with Cairoli fifth – giving Herlings and everyone else a big gain in points.

But Herlings got away badly in race two back in tenth and Prado took his customary holeshot but this time Gajser was on a mission getting into second quickly and putting the pressure on Prado. For half the race Prado dealt with it until Gajser made the move but almost tagged Prado in the air in a very close move.

Gajser slowly but surely edged away as Prado held off Febvre until Cairoli forced his way by the Frenchman with HerlIngs doing the same just two turns later and suddenly the battle was on for the GP win! Prado had it a with 1-2 but Cairoli had found his flow and was putting big pressure on with Herlings right there in fourth. Things got aggressive again with Cairoli and Prado as Cairoli pushed his way down the inside but couldn’t make the pass stick as they came together in the turn, Prado looked across at his teammate as a visibly frustrated Cairoli (once more struggling to pass Prado) then suffered some bad luck when he landed on some overly protruding haybales and went down a few turns later coming into the start straight!

That gave Herlings third and the overall win over Prado but Herlings still made the pass on Prado anyway to limit the damage in the points to Gajser who had a four second gap on the battle behind him to take a much needed win in race two – his first moto win since the second round at the British GP!

Herlings said: “The starts were off but we have time to think how we can improve, it’s something I need to work on. I had to come front tenth (in race two). Tim was gone too far to catch him up. We did a good job 1-2 for the overall, closed some points so that’s positive. We are 36 points down we still have ten rounds to go, there is still a chance, is it going to be easy? Definitely not,I have used all my jokers.”

Tom Vialle is back on form and back on top after a 1-2 score in Turkey to secure the overall win. Vialle hunted down teammate René Hofer in race one to take the lead and pull away to win but the second moto was tougher with Maxime Renaux out front and Vialle having his work cut out to make a pass. Then with a couple of laps to go just when it looked like he was getting ready to attack for the lead, Vialle made a rare mistake and tipped over giving Renaux the breathing room he needed to take the race win and second overall.

It was a great second moto ride for Renaux after an okay fourth in race one, who showed he could go toe to toe with Vialle who many believe is still the best 250 rider in the world, but Renaux has shown he can be there too such is his form and mentality this season. He has increased his world championship lead by three points over Guadagnini who came up a pass short of a podium when he couldn’t get around Jed Beaton for third in race two – and he was furious with Beaton getting the podium verdict after two strong rides. But 2-4 was still a good return for the Italian and it keeps him in the title hunt

Jago Geerts in contrast had a nightmare with a terrible qualifying session (18th) leading to a bad start in race one and a ninth on a track that was pretty one lined. Race two and he had a bette restart but a poor first few corner meant he had his work cut out again and the Belgian fought hard to get up to sixth after Ruben Fernandez crashed on the last lap having previously angered Geerts by cutting across him on the take-off of a jump a couple of laps earlier.

Vialle said. “I’m really happy, back on top, the summer break was good for me, I recovered good. I think 8 am back to a good speed like I was before. Second moto little mistake, Maxime was riding really good. I didn’t find good lines to pass but we will be back on Wednesday.”