Race Report and results: Ironman US National – Tomac finally gets the win! 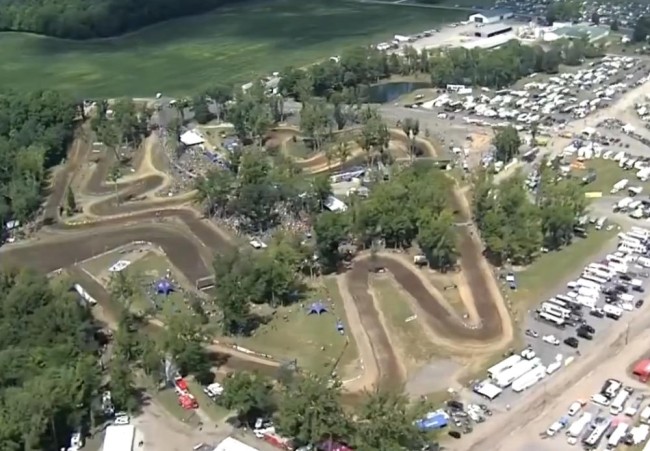 Eli Tomac finally took his first overall win of the year in the outdoor season – at round ten of the series at Ironman! Eli couldn’t make the pass on first race winner, Dylan Ferrandis, in the opening moto of the day but made amends in race two, passing Ferrandis and then Webb for the lead and pulling away – not allowing Ferrandis a look at the lead in the second moto once Tomac got into clear air and got his pace going.

A relieved Tomac said: “All I can say is better late than never! Finally had the day we wanted to have. Today I brought it in both, I was finally able to do my thing. That overall was really getting at me.”

But it was still a strong day for the Frenchman Ferrandis who, after battling Roczen early in race one with the German having another stunning first lap to go from fifth to first, but was not quite able to keep Ferrandis or Tomac behind him, ultimately settling for third as Ferrandis held Tomac off the entire way for the victory. But Dylan admitted after his win he didn’t have the energy he usually had as the humidity at Ironman took its toll.

Ferrandis who actually holeshot race two worked his way back into second re-passing a rejuvenated Cooper Webb with Tomac nearly five seconds out front having passed both riders to get into the lead! Ferrandis wisely didn’t risk it all to run with Tomac accepting second – but he still had to push with Webb not giving up the entire moto to take third in his best ride of the year.

“I give everything to my sport, I give everything to be on top, said Ferrandis about his great outdoor season. “Today was a hard day,” he admitted however. “I really suffered all day, I pushed too hard last weekend in Budds Creek, and today I suffered both motos. I just didn’t have the energy to fight with Cooper and Eli, he deserved this win, he was a on a mission, second overall was awesome today.”

A relieved Webb said of his first podium of the year: “It’s awesome! I felt like myself today, we made some crazy changes, we changed the frame this week and I thought Ian and Roger were going to possibly murder me! I told them to trust me, I feel like today was a much better day, running with the leaders and lead some laps, I’m stoked. I feel some confidence again and I feel good with confidence but we will take it one step at the time.”

A disappointed Roczen, who went 3-5 for fourth overall and is now 50 points behind Ferrandis, said he just didn’t have the energy in the humidity: “The weather today was definitely on the warmer side, for me I felt more fatigued than last weekend, in the second moto I couldn’t really charge forward too much, I just tied to maintain and ride smart, it wasn’t the best race but at least we leave here healthy.”

Jett Lawrence took control of the 250 US National championship with two dominant moto wins as his title rival Justin Cooper could only muster two fourth places to lose the points lead and leave himself only two rounds to get it back!

Cooper took the holeshot in race one only for Jett and then teammate Martin to pass him. Martin was on a mission and closed in on Jett but couldn’t get the pass done then went down hard when a scrub went wrong leaving the unfortunate American with a broken wrist and out for the rest of the season. Martin’s crash meant Jett had a huge lead and Cooper faded to fourth in the humidity.

In race two Jo Shimoda got a rare holeshot but Jett made the pass early for the lead to control the race to take a huge double win at a crucial time in the championship, saying: “It’s a great feeling, it shows I’m not giving up. I’ve been needing this for a while now.”

Jo Shimoda rode great but just lost out in the last couple of laps to a charging RJ Hampshire for second with Cooper a ways back in fourth for fourth overall putting himself in a must beat Jett Lawrence situation in the penultimate round at Pala. Cooper, now 11 points behind with four motos left, said: “Just got to keep fighting, it’s not going to be easy. I’m giving my all every moto, it’s not over yet.”