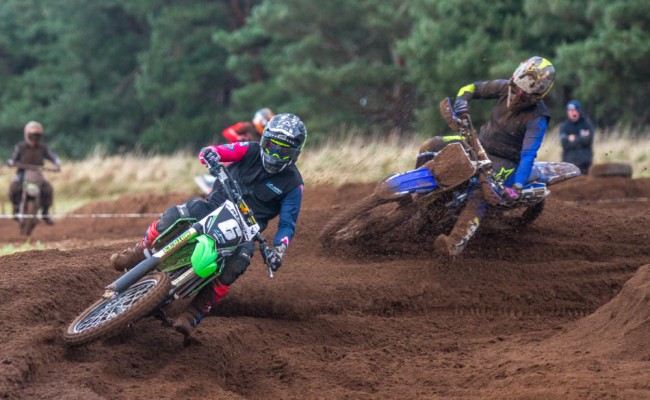 The final of the four-round Rock Oil Michelin Ecosse XC Winter MX Championship went ahead as scheduled last Sunday, regardless of the chaos being caused across the UK by Storm Ciara

The hard-working Ecosse XC team sent the quads out first in practice to sweep the top layer off the track, producing a surface that even kicked up some dust at certain points … Each of the nine classes enjoyed a full three blocks of racing apiece, and the club managed to once again pack in a seamless programme of racing, ensuring all competitors and supporters were able to get away before dark.

Carlton Husband was back in the A-group. He and Ross Rutherford were stuck in a great start-to-finish battle in the opening moto, with Husband using all his skills to keep Rutherford at bay. Husband took the win, but then, thanks to machine problems, he was unable to compete in the second and third races which were both won by Rutherford. Jake Preston was second overall and Keith Noble third.

There was a new name out front in the Bs. Donald Draffan took a win and two seconds to secure the overall ahead of Michiel Graham, who took the second race win, and Stephen Watson, who won the third race, rounding out the podium. Dylan Grieve continued his winning streak in the packed-out C group, however, as he didn’t contest the opening round of the series, the championship win went to the consistent Barry Smith, who finished second overall, followed by Stephen Humphries with a third on the day, and second in the championship.

Tom Grant cleaned up in the Vets with three wins and, had it not been for a third in the last race of the third round, would have netted a full-house in the championship itself. Gordon Morrison did enough to take second and secure second in the series, while Craig Smith had his best overall result of the championship and enjoyed a third overall. Shay Page had his ninth successive win in the Rookies category with Logan Ferguson and Tony Hume chasing him across the line.

In the Youth sector, Hudson Roper and Jay Cheel were the ones to beat in the BW85 class. Roper took a win, a second and another win, with Cheel taking two seconds and the middle race win. Kerr Thomson took three solid thirds and third overall. Fully recovered from injury, a back-on-form Cristina Palmer delivered the goods in the SW85s with a second and two class wins, finishing inside the top six in each race in the combined BW/SW results. Overall runner-up Connor Smith took the other class win, a second and a third and, with two thirds and a second, Bradley Johnstone was third. Hayden Statt was on fire in the 65s with three wins to his credit, however, the championship went to second placed Jamie Prentice with another 120 points added to his tally. Ellis Nelson was third on the day.

Over on the quad front, Oli Sansom once again set the pace, getting the first holeshot and winning all three motos. With an impressive 12 wins from 12 starts he won the championship with maximum points – the only Ecosse rider to do so. Behind him Michael Brewis struggled with tyre choice on the first moto, but after borrowing wheels before moto two, he was back on form and able to defend his runner up position on the day and in the championship as well as getting the moto three holeshot. Young gun Robbie Wood’s day started well with a second place in moto one and third in moto two, but by moto three, his quad was playing up dropping him back to sixth, however, it was just enough for him to grab third overall on the day and in the championship.