Race report and results: Cairoli wins a dramatic MXoN with Italy at home in Mantova! 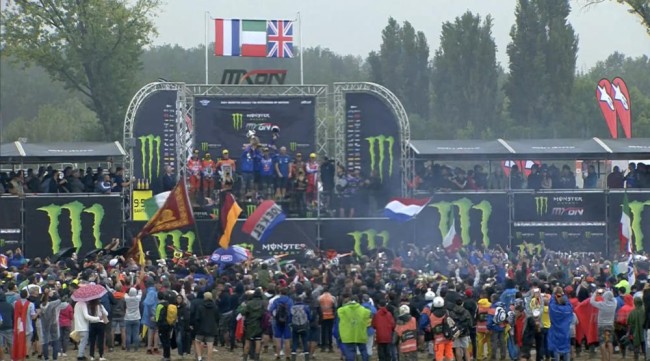 That was chaos from beginning to end! Team Italy finally took the MXoN win to give Cairoli, in his final year of racing, his first ever MXoN title to go with those nine world championships, but it was dramatic and not secured until the last lap of race three.

In a wet race one, Glenn Coldenhoff went wide and took Cairoli down with him leaving them both coming through the field and Cairoli have ing to stop for goggles but Mattia Guadagnini saved the day with a cracking fifth as Thomas Kjer Olsen took a surprise win from a fast Tom Vialle who crashed and still took second!

Race two and the Italians pulled it together despite a crash each from Guadagnini and Lupino to go 6-7 but then, just when it looked like then had it in the bag with Cairoli running second and Lupino 8th despite a crash in race three, it emerged Lupino was facing a ten spot penalty for cutting the track after going off at turn one! That meant, as things stood, the Netherlands would win on a tie-break with Herlings in the lead on his way to going 1-1 and Coldenhoff third! The stressed Italians got the pit-board out to Lupino who, with five minutes to go, had history all resting on his shoulders that included his best mate, Tony Cairoli’s last chance of a MXoN win because he had to make one more pass!

Lupino looked ragged as he searched for a way by a flying all weekend, Sabulis, for seventh and with a couple of laps to go he made the crucial pass and hung on for the last two laps on a difficult track, despite pressure form Brylyakov, to give Italy the win and Cairoli the ideal retirement gift just one week after being taken off on a stretcher at Riola!

A delighted Cairoli said: “Super happy we didn’t everything in our powers, I give everything I had, I think the guys did more than me we deserve this title!

The Dutch came within one frustrating point but that crash by Coldenhoff and Roan van de Moosdijk battling from behind each time in MX2 meant they just came up short despite Herlings dominant moto wins in what was the first time he had done the double at the MXoN.

It was a brilliant day for the Brits with Ben Watson winning the MXGP class with a 3-4 despite a monster mid-air crash in the final moto while third. He had a big lead over the res to the pack and only lost a position to Coldenhoff and with Simpson backing him up superbly with a sixth and 12th from race one despite a broken ligament in his thumb plus Mewse doing is bit with a best result of 14th, to get the British boys back on the podium for the second year running – and were only two points away from Italy!

Simpson said: “We are just keeping the streak alive! Conrad’s first time, Ben rode amazing, the old dog has still got it even with a Gammy thumb! These guys are a huge part of the team and I thought I had blown it for them yesterday.”

It was heartbreak for team Belgium who after two races were actually lying second but two DNF’s in the final moto killed their chances of the podium, but Everts, Genot and Van Doninck rode fantastic all weekend and still got sixth!. In the end it was the Russians MFR lead by Bobryshev who took a brilliant fourth with Brylyakov riding superbly as well. France took fifth a decent result but after looking set to win it in race one a DNF from Vialle and crash by Boisrame ended their hopes befor the third moto, but despite no Ferrandis, Febvre, Renaux or Musquin and a DNF for Vialle, the French still got up and a top five was very respectable under the circumstances.

An unbelievably dramatic day ended with a storybook ending for Tony Cairoli, with both a relieved Lupino and ecstatic Guadagnini in tears of joy. This was special for everyone but what an ending for Cairoli at 36 years of age to take the MXoN title, he has now won everything there is to win in motocross!

Listen on iTunes here or get it on Spotify or YouTube below: