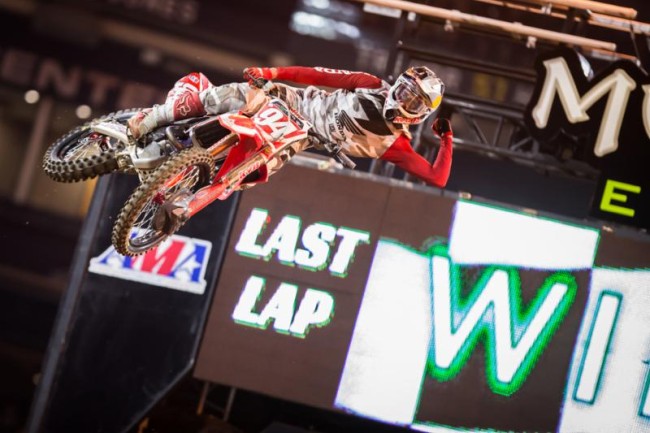 As the field roared out of the gate to start the 450SX Class Main Event, Dungey, the defending Monster Energy Supercross Champion, put his KTM out front to earn the SupercrossLive.com Holeshot Award with his teammate Marvin Musquin and Roczen tucked close behind. Roczen was able to slot into second and immediately started to apply pressure on Dungey. The champ fended off an initial challenge and the pair then settled into position, pacing one another for six laps.

On Lap 7 Roczen was able to take advantage of a slight miscue by Dungey, diving under the KTM rider to assume the lead. Dungey fought back and was able to put a wheel inside his rival on several occasions before settling into second. The distance between the two over the second half of the Main Event was virtually the same as it was earlier in the race, but as they encountered lapped riders Dungey was able to close the deficit and apply pressure in the closing stages. The KTM rider mounted a serious challenge over the final two laps and was able to briefly get alongside Roczen on the final lap until a bobble stalled his momentum, allowing the German to take a hard-earned win.

“Ryan [Dungey] kept me on my toes. The track broke down and it was really rough out there, but that’s the fun part,” said Roczen, who now has 11 career wins. “I hope the fans enjoyed it. That’s what they want to see [a battle for the win]. I’m actually happier with this weekend’s win than last weekend’s. I’m happy to be up here again. Another day in the books and I’m looking forward to next weekend.

Dungey’s runner-up finish was the landmark 90th podium result of his career. He’s finished inside the top three in 35 of the past 37 races, going all the way back to the final round of the 2014 season.

“I had two spots where I thought I could [make the pass] and I made a mistake before each of them. I came in too hot into one of the corners. I knew it was the last lap and I was trying hard,” said Dungey. “We [Roczen and I] fought to the end. It was an intense race. It was good because I led a little bit and then he led. We were really pushing the pace and if you’re going to race someone like that, it’s going to be a battle to the end.”

After settling into third off the start behind Dungey and Roczen, Musquin went virtually unchallenged en route to a third-place finish, duplicating the finishing order of the top three from the opening round one week ago.

Roczen extended his lead in the championship to six points over Dungey, with Musquin 10 points out of the lead in third.

GEICO Honda’s Jimmy Decotis earned the SupercrossLive.com Holeshot Award to start the Western Regional 250SX Class Main Event, with Rockstar Energy Husqvarna Factory Racing’s Martin Davalos and Yamalube/Star Racing Yamaha’s Dan Reardon in tow. The advantage off the start allowed Decotis to sprint to a comfortable lead early, while Davalos battled his way past Reardon to take over second. Reardon would then crash out of third on Lap 4 and fall out of contention, giving the position to McElrath, who started fifth.

Davalos started to close in on Decotis just past the halfway point of the Main Event and eventually was able to mount a challenge and make a pass for the lead on Lap 10. Behind him, McElrath was mounting a charge of his own and passed Decotis for second on the same lap. The lead group was forced to deal with heavy lapped traffic at this point of the race, which allowed Monster Energy/Pro Circuit/Kawasaki’s Justin Hill and Yamalube/Star Racing Yamaha’s Aaron Plessinger to join the fight up front after starting in ninth and 10th, respectively.

Davalos and McElrath engaged in a battle for the lead in the closing stages of the Main Event, with McElrath getting the upper hand on Lap 16 with what would be the winning pass. Davalos quickly fell into the clutches of Hill, losing control of second, and would ultimately drop off the podium after getting passed by Plessinger on the final lap. Hill took advantage of lapped riders to get close to McElrath and dove inside on the final corner, but the KTM rider took the win by half a bike length. Plessinger rounded out the podium.

“I try to just treat the race as another practice day. We go through pretty much every scenario that we can be in during a race. We’ve been working hard, spiritually, mentally, and physically,” said McElrath. “I’ve just kind of been in the zone all around and I think that’s been the biggest part [of my success]. Last weekend could have been seen as a fluke, but tonight I proved a lot to myself and I’m just happy to keep it going.”

“I was mentally just trying to fight through the pain and the tightness of dealing with a tough track,” said Hill. “Shane [McElrath] rode awesome and he deserves the win. He made me work really hard for second. I think I put in a really good effort tonight and I’m more confident going into next weekend that I can earn one of these [wins].”

McElrath added to his championship lead in the Western Regional standings, and now sits eight points ahead of Plessinger. Hill moved into a tie with Davalos for third, 12 points back.

The 2017 Monster Energy Supercross season continues next Saturday, January 21, for the third round and a second visit to Angel Stadium in Anaheim, California. The action can be seen live on FS1 starting at 7 p.m. PT / 10 p.m. ET.

McElrath made it two in a row. Pic: Feld