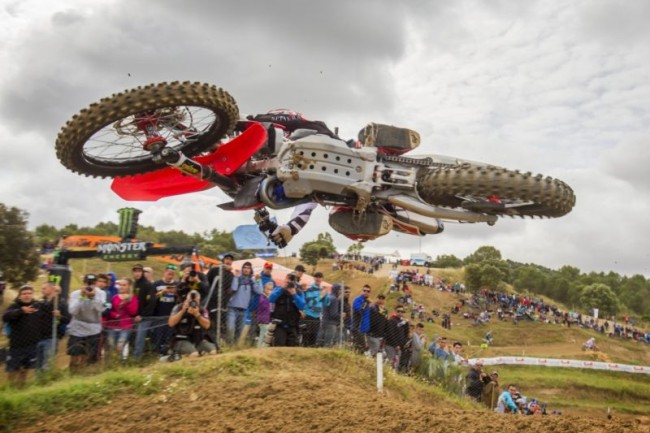 It was a weekend to remember for Tim Gajser!

Two dominating wins as his title rivals suffering off days for various reasons, has put the rookie in pole position to win the most prestigious motocross championship in world.

Gajser, after a couple of mistakes in Italy, hit the reset button, took the pressure off himself going into Spain and altered his training routine during the week- off, it all resulted in one of his most dominating performances of the year. Two good starts and flurry of intensity in the opening laps of each moto, (just like Roczen has done in the USA) saw Gajser get to the lead quickly and open up a small gap over Max Nagl in both motos. Nagl kept Gajser in sight but was never really a threat to the lead and Gajser after his crashes in Italy, controlled the race from the front like Cairoli did in his pomp.

“It’s been such an amazing weekend,” offered Gajser. “I couldn’t believe that I could top the charts in every session, or that at halfway through the season we could have finished on the podium at every single race, with five wins too. It’s an amazing feeling. This weekend also shows that we’re working in the right way to keep strong, because in the last few races I’ve made some rookie mistakes, and we’ve worked on this area a lot since Trentino so a double victory here is the perfect way to come back after a week off and shows that our work pays off immediately.”

Gajser now has a 26 point lead over Febvre and 47 points over Cairoli and with both his rivals seemingly more focussed on each other and a war of words on social media (plus potential on track revenge), Gajser is taking advantage and is sneaking away with this title.

Tony Cairoli undid all his good word over the last couple of weeks, he clawed his way back to just 25 points behind Gajser and in one poor weekend, went back where he started and is 47 back! On a track where you needed starts Cairoli blew it both times, although in moto one he only had Jose Butron between him and Gajser half way round lap one, but Cairoli got stuck in sixth as Gajser went from fourth to second in lap. By the time Cairoli got into fifth Gajser was leading an pulling away.

The intensity of the teenager is winning these races and making the his more experienced title rivals make mistakes. A horrendous start in race two left Cairoli outside the top ten in race two but the Italian went to work and was the fastest man on the track as he pulled up to the top six only to go down and finish in a lonely ninth.

But the event was all about his altercation with Romain Febvre the day before. Febvre crashed into a stalled Shaun Simpson on a tight left hand turn and as he lay on the ground Cairoli tried to sneak up the inside, unfortunately Febvre was in the way and Cairoli tagged the Frenchman and injured his arm. Febvre glared at Cairoli as he lay on the ground believing the Italian did it on purpose, (Cairoli though, denies this ans says it was an accident.) Either was the damage was done for Febvre, he had to start from the outside gate on race day and deal with the pain of an injured arm that meant he was a doubt to race at all.

In race one Febvre got ninth, a satisfactory result, but somehow in race two Febvre gutted out a top five start and passed Bobryshev to claim an unlikely fourth place.

Febvre admitted he was pleased with his results under the circumstances: “Yesterday I didn’t know if I could ride, so today was almost like a victory. I had two good starts, and in the second moto I went from 30th to 5th. For sure I lost a few points in the championship, but I was able to save much more, and that makes me very happy before we go back to France next week.”

Febvre is now in a race to get himself fit for his home GP this weekend in France and he can’t afford to let Gajser get anymore points on him!

It was two Hondas on the podium in France with Gautier Paulin taking third overall in only his second GP back from injury. This was more like the Gautier Paulin of old, fast, stylish and looking comfortable on the bike. The only thing Paulin lacks was a bit of intensity at the beginning of the race, but having been out most of the season that is not a surprise.

It was also nice to see Clement Desalle back at the front, fourth overall is the best so far this season for Desalle after injuries ruined his title assault. It has been a long time since Paulin and Desalle have been in the top five at the same time and it’s great to have them back and mixing it up at the front.

In MX2 Jeffrey Herlings dominated again, he lost the qualifier moto after a bad start but his pace was at times, 2 seconds a lap quicker than race winner Dylan Ferrandis.

So, when Ferrandis holeshot race one on Sunday only to have Herlings get himself quickly into second, it was a question of when not if and after ten minutes Herlings took the lead and checked out. In race two Ferrandis got a bad start and it was left to fellow Frenchman Benoit Paturel to keep Herlings honest in his best race of the year so far, but Herlings was always in control and is showing a new, smarter style this year.

He is playing on the track, using braking bumps to jumps corners, he doesn’t rush to front in half a lap like the last few years, everything is happening slower, he is becoming a thinking man’s racer and he still has the blistering pace when he really needs it. Herlings is becoming the full package now, and sometimes reminds you of Stefan Everts with his precision feet on the pegs riding at times this season. This could spell trouble for everyone when he steps to the 450!

Pauls Jonass rode well once again to claim third overall after big battle with Jeremy Seewer in race two that ended with Seewer crashing with a couple of turns to go attempting to pass the Latvian. Jonass gained 12 points on Seewer as he attempts to take second in the championship standing.

The teams now head to France this weekend where a huge home crowd with undoubtedly inspire Ferrandis and Paturel to try and challenge Herlings in MX2 and Paulin, Febvre to give Gajser a run for his money in the 450s. It should be another cracking round of MXGP!