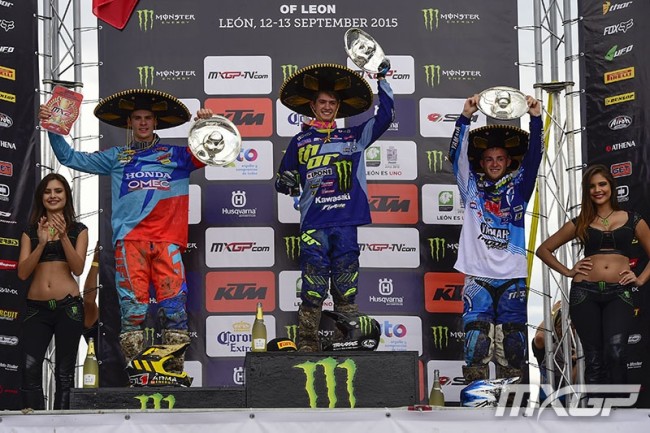 It was another dominant performance by world champion, Romain Febvre. The Frenchman won a muddy first moto by 45 seconds then won again on a dry track after controlling the gap having built a ten second lead.

Any track, anywhere and Febvre seems to be able to run at the front. It will be interesting to see how the Frenchman does at a fast and hilly Glen Helen against the Americans on their home track this weekend. You can bet he wants to prove a point to them and the returning Cairoli.

Shaun Simpson was on the podium yet again with a fine second overall. The Brit’s confidence since he won at Lommel has been at an all-time high and you can tell just by the way he is riding the bike. Loose would be the way to describe Simpson right now on the factory KTM. The humble Simpson finally appears to have the self-confidence that he can run up front on any circuit.

Evgeny Bobryshev was third overall and ran down his teammate Paulin in race two to do it. Bobby even caught Simpson for second but couldn’t find a way by in the latter stages. The big Russian was flying, keep an eye on him at Glen Helen!

Jeremy Van Horebeek had a so-so day but his consistency got him fourth overall. Van Horebeek doesn’t seem to have the confidence of last season to make the passes when he needs to but perhaps he is saving himself for the Nations now!

Gautier Paulin is still searching for top form, he went from first to fourth in the second moto before looping out trying to pass his teammate back. Febvre and Musquin will hoping Paulin can turn it on in France in ten days and not get bullied by Barcia and Webb!

It looked like he was a certainty to win his first overall when disaster struck, twice. Just like in Assen Jonass lost the front wheel in turn one and went down getting run over by a couple of riders. But Jonass got up and put on an impressive charge catching up seventh and to the back of the pack that Gajser was in. Jonass could see his rival just in front of him when he got ejected off his KTM over a big jump (think Chad Reed at Millville) and fell to the ground spectacularly.

Amazingly Jonass was unhurt and remounted but had to go to the pits for repairs and could only finish 13th meaning he is now 18 points behind Gajser going into Glen Helen.

Gajser rode well in race two to take second behind a superb Thomas Covington. The American rode to a steady fourth in race one in the mud then led race two virtually the whole way. Even when Gajser got a 13 second gap down to five seconds, Covington held strong in the final couple of laps to take the moto win and the GP win.

It was a brilliant achievement for the young American who said: “It’s so good to finally get a win. I’ve been pushing hard always and it’s been a tough two years with a lot of bad races, a few good ones and coming here to get this win is unbelievable. I hope to keep this going. The first race the track was really muddy and I just tried to survive and not to crash; I had the holeshot but went too much to the outside and a few guys passed me. I tried to keep on two wheels and it was pretty tough. The track was completely different for the second moto; it was pretty dry in some places. I was second at the first corner and finally made the move to first place. I tried to put down some fast lap to make a gap; I knew that Gajser was coming back at the end of the race but I held on to win this moto. I had no idea that I had won the GP until I arrived at the podium! Next weekend it will be good to race at Glen Helen; I will go to my home race full of confidence.”

Covington, already excited to race his home GP, will now be even more ready to put on a show for the home fans amidst the drama of the Jonass/Gajser championship fight and the wildcard American riders.

It was a brilliant day too for Benoit Paturel who took his first ever GP podium. The Frenchman is the reserve rider for the French Nations team and has had a brilliant rookie GP season, he will be one to watch next year for sure.

The final GP of the year at Glen Helen promises to be mouth-watering affair with the AMA riders racing including Webb on a 450, the return of Cairoli, who won’t want Febvre to end the championship on a high and of course the intense the battle between two talented teenagers for the MX2 world title!