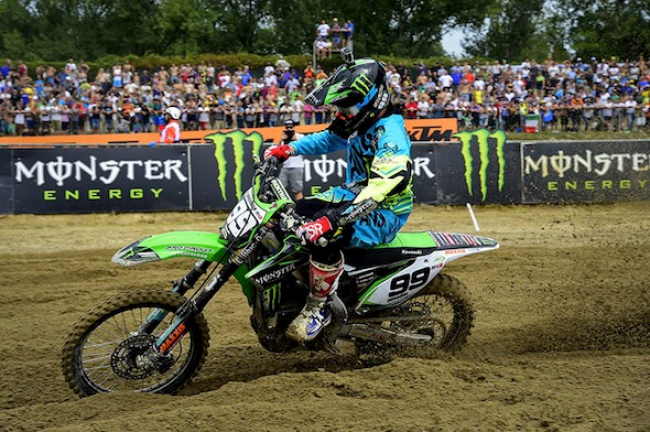 Romain Febvre is with touching distance of his first world title. The French flyer impressively won both motos at the sandy Mantova circuit in Italy to stretch his points lead over Gautier Paulin to 101 points.

It means Febvre only has to match Paulin’s points haul this weekend at Assen to be crowned world champion for the first time in his career.

Febvre was on another level at Mantova, passing riders at will and going anywhere he wanted on the circuit. He is in stunning form right now and all of France will be hoping he can maintain this level until the Nations! 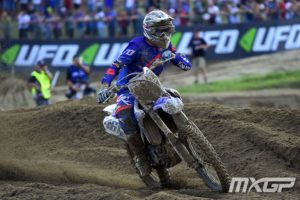 Romain Febvre won again and should clinch the title next week in Assen. Pic: MXGP

It was a Yamaha 1-2 as Jeremy Van Horebeek had maybe his best race of the season passing his main competitors and riding with more confidence than before. Van Horebeek couldn’t stay with Febvre in race two but nonetheless it was a big step in the right direction for the Belgian.

Evgeny Bobreyhev was on the podium again and is closing in on his teammate Paulin for second in the championship, but at 33 points back may just run out of rounds. This has been the best season of the Russian’s career, he has slowly built his speed up this year and has had much less crashes than before. Bobreyshev is now fast and in control (most of the time) and has a great base to build on going into 2016.

Another sand track and another top five overall for Shaun Simpson who is in the form of his life. Due to all the factory KTM riders being injured Shaun got to ride the factory 2016 machine and despite feeling a bit under the weather rode well to a fifth and third position. Simpson is now up to fifth in the championship and could get into fourth at Assen with the continued absence of Cairoli.

A couple of mistakes cost Gautier Paulin a potential podium and forced him back to fifth overall. Paulin has been riding better in the last couple of rounds and his focus will now be on bringing his best form to the Nations.

Max Nagl made a welcome return to the track after his broken leg and promptly went out and won the qualifying heat! But in race one Max went down in turn and suffered a mediocre start in race two and went down while in fifth on the last lap. But eighth overall was a decent comeback and Max showed that once he gets his race fitness back he could be a threat to win the last couple of GPs.

There were yet more injuries in MXGP amongst the factory riders with Kevin Srijbos snapping a thumb ligament and ruling himself out for the season and all but ending Belgium’s chances of winning the Nations. Last year’s nations winner Steven Frossard had a bad crash and broke his femur to bring a painful end to a difficult season for the Frenchman.

In MX2 Jordi Tixier’s hopes of a second world title ended when he dislocated his wrist in timed qualifying, the injury may put him out for the season.

Max Anstie vaulted himself up to third in the MX2 championship with another double win and the Brit is showing the best form of his career. Anstie has finally put all the pieces of the puzzle together and is showing everyone his full potential.

Anstie is still 38 points back and still needs some help but he is doing his part of the job by winning races and with the final round at Glen Helen, Anstie will be in pole position for the title if he can get within striking distance by then. 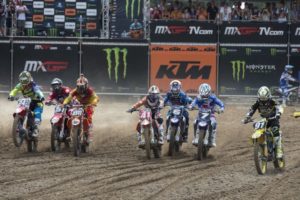 Four points is all that separates Jonass and Gajser with three rounds to go. Pic: KTM Images

But the two teenagers at the front of the championship both made the podium in Mantova. Jonass went 2-3 to show impressive speed under pressure of leading the championship, while Gajser crashed in race one and came from tenth in race two up to second to show his fighting spirit. Gajser has the edge on speed over Jonass but Jonas is making less mistakes, however the end result was that Jonass left the Italian circuit with the some four point lead he went in with and both Gajser and Jonass were probably content with that.

This weekend at Assen will be a man-made circuit and they are bringing a lot of sand which may suit Jonass more than Gajser who isn’t a fan of the soft stuff. But if he can stay within a few points of the KTM man going into the final two rounds, Gajser may edge the favourite status going into the rounds in North America, although Jonass is impressing everyone right now with the maturity in his riding.

The fight will go right to the last round and it’s going to be exciting!