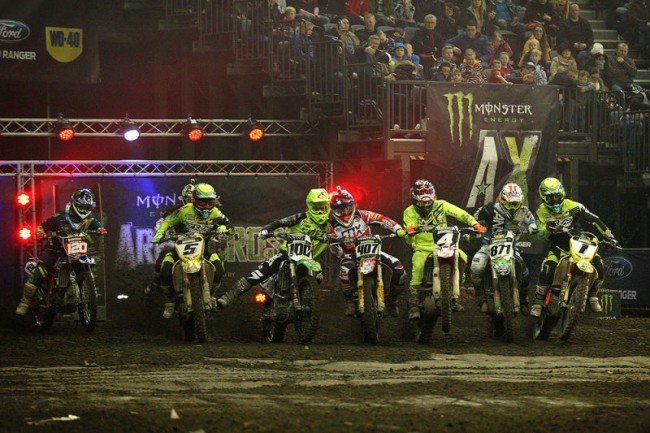 It was a great weekend of racing in Belfast with more than enough memorable moments! We look at some of the highlights:

Soubeyras – Hero or Villain? Cedric Soubeyras got everyone talking both nights, he completely T-boned Adam Chatfield on Friday in the head-to-head and suffered disqualification from that section of the event. But in the main he rode fantastic coming from way back in the pack to second in what was the ride of the night.

On night two Chatfield tried to get his own back but couldn’t quite take the Frenchman down in the heat. Soubeyras put in another come from behind ride as he reeled in Hansen in heat one only to endo doing a triple. That left him with another bad gate pick for the main but Soubeyras stormed through the pack again in another epic ride.

But it ended in controversy after he knocked Thomas Ramette off on the last lap to get second. Ramette ended up finishing last and was so cross he walked the length of the whoops to confront Soubeyras about the pass. In the end Soubeyras lost the red plate to Izoird and made a couple of on-track enemies but he was the most entertaining rider out there with his come-from-behind rides and aggressive passing!

Unlucky Hansen – Josh Hansen won both head-to-head races and could very well have won both main events if it wasn’t for some serious bad luck. The most stylish rider on the track, Hansen was controlling Friday’s main event until a tough block got knocked into his line and left Hansen on the deck.

On night two Hansen looked to be the fastest man on track, doing an impressive triple and then jumping the entire on-off section, that gained him valuable tenths. But it all went wrong in the main again when he got tangled with Adam Chatfield going into turn one and ended up on the deck again. Hansen remounted and pulled through the field to fifth but it wasn’t the results he deserved.

Hansen described the track as, “a mini-bike track with ruts,” and his mechanic said they are finding it all very different from AMA supercross. From the racing format and tracks to living in England, he admitted it’s all out of their comfort zone, but maintains are enjoying the experience and all the different accents they are finding in the UK! Hansen confirmed those sentiments on Twitter by saying: “I can’t wait till next round. I love being over here racing..the fans in Belfast were unreal. THANK YOU.” However, Hansen’s mechanic did admit they are planning on racing AMA supercross again in 2017.

The French – Let’s be honest only Josh Hansen is on the level of the the French riders. Ramette, Izoird and Soubeyras in particular are absolutely flying. Ramette was very impressive on both nights, smooth and efficient of the bike, he was looking good for a 1-2 on the weekend until that coming together with Soubeyras on the final lap of Saturday night. Fabien Izoird goes under the radar but the guy is quality indoors. He never seems to make a mistake or find himself outside the top three. He upped his game to win on Saturday night, passing Ramette and pulling away for an impressive victory and now holds the red plate as championship leader.

The show – The event is run really well with not much downtime between each race. The crowd are entertained throughout between the pros, the freestyle and the youth racing and the crew did a good job of maintaining the track. It was also probably the best dirt Belfast has had in a good number of years! But it would be nice if we could have two main events instead of one next year!