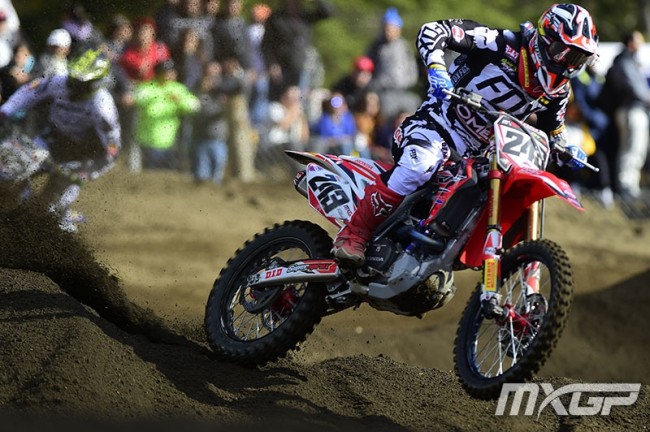 Tim Gajser took his second Grand Prix win in four rounds of MXGP competition to let everyone know he is a real threat for this championship in front of a huge Argentinean crowd on one of the best tracks of the year.

Gajser rode to a patient third in race one before controlling the second moto ahead of Antonio Cairoli. In both motos, on a tricky track, Gajser showed a maturity beyond his years, he didn’t take risks and let the race come to him. It was another impressive GP from the MX2 champ and Tim now has the most moto wins of the season so far – four to Febvre’s three, and is only three points behind Febvre in the championship.

It was a frustrating day for the defending champion who crashed early in both motos and had to come impressively through the field both times. Speed was not the issue for Febvre, he had more than enough speed to challenge Gajser, using some sensational corner speed and excellent inside lines, but the mistakes were costly as Febvre missed the podium and gave points up to Cairoli and Gajser. The Frenchman has handed back some of the momentum he gained at Valkenswaard.

Antonio Cairoli finally made it back to the podium and did it with a brace of second places. In race one Cairoli went from first to fourth and it looked like the former champ was struggling to deal with the intensity of the pace in 2016 but with ten minutes to go Cairoli finally found his groove to pass Bobryshev and Gajser back and it was then Cairoli showed he was going to fight hard to get the title back.

Cairoli couldn’t stay with Gajser in race two but took second place and was visisbly pleased to get his first GP podium of the season. Cairoli has been saying all year his fitness hasn’t been on point due to his injuries, and even in Argentina he said he wasn’t at 100% but the results are improving and Cairoli is establishing himself as the man to battle Febvre and Gajser for the title.

The real Max Nagl finally showed up this weekend! The German has been off the pace so far this season but he has finally got the 2016 Husky set up to his liking and ran away from the field in race one to become the first rider other than Gajser and Febvre to win a moto this season. Race two wasn’t quite as impressive with a fifth place finish after admitting he was out of energy after his first moto efforts, but Nagl looked much better in Argentina than in previous rounds.

Jeremy Van Horebeek overcame mediocre starts to claim fifth overall but is still coming up short when it comes to challenging for wins. His speed is good but that extra edge, possibly belief is still missing for the Belgian to win races on a consistent basis.

In MX2 Jeffrey Herlings took his 100th moto win en-route to a standard double moto victory. You have to wonder if even Herlings gets bored in MX2, especially when he sees two former competitors currently dominating the MXGP class!

The reality is Herlings was putting in lap times as fast or faster than the leading MXGP competitors on his 250, the Dutchman is going ridiculously fast and there simply isn’t anyone who can remotely challenge him in MX2 with Ferrandis out.

Jeremy Seewer has emerged as best of the rest with another second overall, on a track the Swiss talent admitted he initially didn’t gel with. Seewer battled hard with Alex Tonkov in the second moto but got the best of the Russian who is also have a good start to the season on the Wilvo Standing Construct Yamaha.

Poor Max Anstie, the Brit took a solid second place in race one and looked set to be on course for a podium in race two only for a mechanical to take him out of the race. Anstie is getting his speed back but he doesn’t have the luck he needs to get back to the rider he was at the end of last season.

Special mention must go to Samuele Bernardini, who took a brilliant fourth overall on the TM. The Italian showed some speed at times last year but he has shown even more speed and aggression so far this year and has been a bit of a revelation. He charges especially hard at the beginning of the race and isn’t afraid of mixing it with anyone.

Thomas Covington was back on form in Argentina and looked set for a top five but hurt his already injured ankle during the first moto and lost a few places due to the pain but it was good to see Covington back at the sharp end and ending with a decent eighth overall.