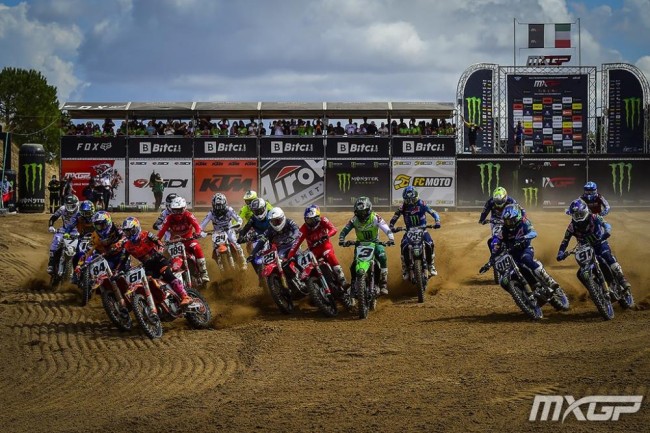 The GP of injuries! Herlings take the red plate after injury, Gajser rides 8 days after a broken collarbone but loses the red plate and Cairoli loses his chance of gaining points on Gajser after a big crash in practice sadly ruled him out of the his home Sardinian GP!

For a moment that Cairoli crash was worrying, especially seeing him being Carried away on a stretcher, just days after his retirement announcement and just when it looked like with Gajser’s injury Cairoli had a enhanced shot to make it ten titles and equal Everts record. As it was Cairoli was deemed okay without any serious injuries and despite missing both motos, making it three no point scores this season, is actually still within a race of the championship lead, 45 points back.

But it’s Jeffrey Herlings who now finally has the red plate for the first time this season! Two important race wins when he needed it and riding perfectly in the sand with that momentum and flow he is famed for, and Herlings has erased the deficit he thought would take a few races to pull back even if things went well! But Herlings, showing his maturity and empathy, straight up acknowledged this wasn’t how he wanted to do it offering sympathy to both Tim Gajser and Tony Cairoli for their situation. Herlings took a long, concerned look back at Tony when he saw the Italian being stretchered off and that told you all you need to know about the level of respect Herlings has for Cairoli despite some big battles and intense rivalry over recent seasons.

Another rivalry brewing could be with Jorge Prado! Yet again Prado did all he could to stay in the lead in race two and rode the perfect defensive race for 20 minutes until Herlings finally squeaked by – and even there there as nearly contact! Prado’s complete calmness under big pressure is remarkable and after two second place finishes his is now only 12 pints back in the points, that DNF in Turkey is no longer an issue and Prado is where he needs to be to give him a shot at the world championship.

But also right there and only four points off is Romain Febvre. The Frenchman didn’t win but he underlined his progress in the sand with another two strong riders, especially in race two when he went with Herlings and Prado at the front and matched the flow they had. Febvre looks brilliant on every condition now nd he’s even getting consistently good starts. With hard pack coming up I expect to really go for glory over the next couple of GPs and chase that red plate!

Tim Gajser’s 12th overall was better than a double win under the circumstances. Just eight days after surgery on a broken collarbone, Gajser showed unbelievable grit and determination to gut out points in both motos despite crashing twice in race one. This was a world champion performance and the depth these guys are dig this year to be world champion has to be admired. Roger Harvey told me a few years ago he was impressed with Gajser’s ability to take pain but this might be the most impressive level of torture endured by Gajser in his career. Hard as nails.

Calvin Vlaanderen deserve a lot of credit, he rode fantastic to take fourth overall after to fourth, places and beat all the factory Yamaha stars! Vlaanderen is now knocking on the door rather loudly for a factory team next year, he’s delivering in 2021. Jeremy Seewer can be proud of fifth overall, suffering a lack of energy and still getting top five was impressive and Ben Watson showed flashes of the raw speed he has in moto one to come him a strong sixth overall and brilliant rebound after Turkey.

In MX2 it was Tom Vialle showing his brilliance and resilience at Riola. A moto win in race one despite Renaux coming on strong at the end left Vialle exhausted but he somehow got energy back in between motos and dominated race two! To do that in the deep sand was impressive and you could tell how much it meant by Vialle’s reaction at the end. Vialle is the complete package and should be one of the biggest names in the sport.

But Maxime Renaux once again showed he isn’t afraid to go and challenge Vialle despite being in the points lead! That first moto ride was one to be proud of fighting through into second and nearly getting that win, raeally impressive in the sand and two Frenchman going 1-2 on one of the toughest tracks in the world says everything you need to know about France at this moment in time, they can ride anything and are prepared to invest time in Holland and Belgium to make themselves the complete rider.

It was another disaster for Jago Geerts despite a blistering qualifying lap that out him pole and showed just how good he can be! A crash after a poor start in race one lined him to eighth and despite a strong ride into ace two to pull through to second, by the time he got there, Vialle was too far away to make a run for the lead and Geerts missed the podium taking fourth overall on a day he probably should have won. Geerts has all the prices but mentally he still makes small errors that are preventing the Belgian talent from showing his real potential- which should be battling Vialle and Renaux every week for race wins.

Kay de Wolf is just brilliant and so exciting to watching, amazing speed and huge heart De Wolf just gives it his all and made the podium despite crash in race two and not the greatest start in race one – it would have been interesting to see what he would have down if he got away with Vialle!

Good riding but bad luck cost Mattia Guadagnini who showed big impreovement in the sand to take third in race one but he was too keen in race two and crashed after colliding with Vialle on lap one then a mechanical forced a costly DNF in race two and he is now 72 points back of Renaux.

Liam Everts was a positive story on his GP debut 15 years after Stefan retired with Liam going 16-11 for 13th overall and Everts admitting he was nervous in race one but rode to his potential in race two to nearly go top ten – a great building block for the future!

All in all it was a great GP on a brilliant track, a bit like Lommel but with more elevation, even if the racing isn’t good it’s great to see the best riders in the world navigate this type of terrain and the way the likes of Herlings and De Wolf manipulate the bike of the bumps is truly special to watch. But now it’s the return of the hard pack in two weeks in Germany!

Podcast! Jonathan McCready and Andy McKinstry discuss the race at Riola and the injuries as the MXGP championship chase tightens up and also look at some of the teams that could win or podium at the MXoN.

Get it on YouTube or Spotify below or iTunes here.