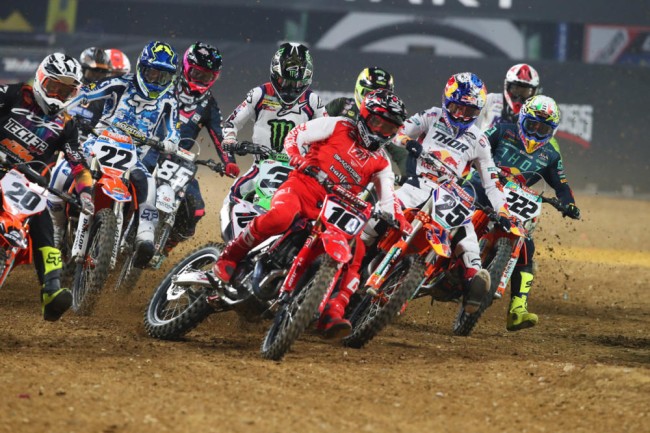 Supercross is definitely a show and the folks at Paris know how to entertain! Lightshows, a flying man and some freestyle fun all contributed to the show as well as the impressive Squid game rider intros and tributes to Chad Reed and Antonio Cairoli – all very well done.

This was my first time at the Defense Arena having previously been to Bercy and while the atmosphere, I would say, is more intense at Bercy with the crowd on top of the tight track the size of circuit itself at the Defence Arena is certainly much more realistically comparable to that of an AMA supercross. The rythm lanes might be slightly longer in the US but with lap times around 45 seconds the track crew did a good job with the layout.

There was some negatively about having sand whoops instead of stadium whoops but for me it worked quite well and was something different, you could still make up time and it allowed the GP riders to be more competitive while the rest of the track was still definitely suited to the supercross regulars with timing being imperative.

The interesting thing was the US guys had generally flawless timing while the GP guys sometimes got their rhythms a bit wrong – but they made up for it in their corner speed to make the racing pretty even! The racing of course was intense and Cairoli and Renaux found that out to their cost in the opening motos both crashing into the back of another rider in a corner, the racing is intense from the off and good decisions need to be made in the pack and when going for a pass but both Renaux and Cairoli had it figured out by race two with Renaux especially picking better moments to pass and not rushing his moves.

But he also found out how important a start was a Kyle Peters executed his race to perfection, three holeshots and three wins with zero mistakes all day got him the prince of Paris title as Renaux had to settle for second despite being the fastest man in all three motos once he got clear air to use that impressive corner speed!

Romain Febvre was the excitement and the sadness of the event. His speed was so impressive and if anyone was going to get close to Musquin, Febvre looked to be the only man who could do it, he even went fastest in Friday’s second session and looked set to go quickest in qualifying in Saturday morning only to get the last corner wrong. A bad start and a couple of mistakes trying to pass relegated him to fifth in race one but he was on the gas in race two, quickly getting into second and setting about going with Musquin and had a race win on his mind when it all went wrong.

It highlighted the danger of supercross as one small mistake can lead to a terrible crash. Febvre clipped the top of the on-off table-top landing and that sent him into the triple of all things, out of control with the Frenchman landing heavily and needed stretchered off the track with an apparent leg injury. It was hard to watch, especially knowing how close Febvre came to a world title, he was no doubt still carrying that disappointment but was still performing at such a high level in Paris to have that crash happen and now be in muted again with the 202s MXGP series just three months away, this is going to be very difficult for Febvre to deal with, especially with how well he rode all year long.

On the more positive side was Chad Reed and a remarkable Antonio Cairoli. Reed’s practice times weren’t bad but not amazing and then the races came and, as he always did in his prime, he delivered when it mattered. Two decent starts saw Reed find his groove in the first two motos to go 6-5 although a less than stellar start led to a seventh in race three but still, fifth overall is pretty impressive for the retired supercross legend!

But the night aside from Marvin Musquin’s dominance ended up belonging to Antonio Cairoli who took third in an explosive last turn of the main event that left an unsuspecting and frustrated Justin Brayton on the ground!

Cairoli, took a fantastic second in superpole behind Musquin but, as we mentioned, crashed in race one after a terrible start and was so far back he just rode around to get some experience but race two he got away better and followed Reed home for sixth and it was pretty cool to see two of the biggest names in history circulate together for probably the last time! But Cairoli had the speed and he was up for it in race three!

Despite starting in the second row Cairoli came out fifth and got into his groove following Brayton and Cedric Soubeyras. A couple of missed rhythms cost Cairoli some time mid-way through but he regrouped and by the end of the main he was the fastest man on track, and when Brayton and Soubeyras went to war on an exciting last lap, Cairoli pounced and made third his on the last turn and the crowd went absolutely ballistic! A French 1-2 and one of the greatest riders of all time taking third in a supercross main event – it couldn’t have went any better for the fans! And Cairoli showed that even at 36 years old, if you give him a bike and a track he will figure it out, the Italian is a living legend and just added to his legacy on Saturday evening and his ability to adapt to supercross was very impressive.

Cedric Soubeyras deserves a lot of credit for his performances, great starts and fighting all the way, he fully deserved second overall – and he helped France take the Nations cup crown over the USA. He and Marvin embraced at the end of the third moto with Marvin showing just how pleased he was for his mate to deliver such a performance in front of the home fans.

All in all it was a memorable day, Musqin domination, Reed racing again, that awful crash by a flying Febvre put a bit of a dampener on things but that explosive final corner ending with Cairoli taking third in the main to get the loudest cheers of the night was a fitting way for the Italian to end an extraordinary professional career!