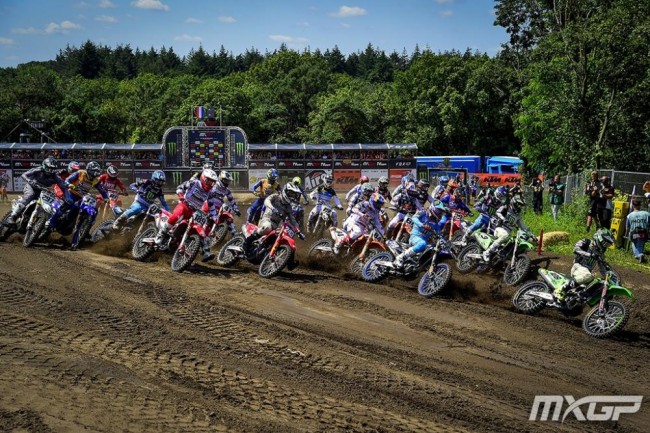 What a dramatic weekend that was! The Oss track was superb; tight, technical and difficult with the crowd refreshingly close to the riders in what was like a sand track version of Kester in Belgium! It wasn’t your usual sand track though and certainly not deep like Lommel, which meant Gajser and Febvre were very much on the pace all day as well as the sand specialists to provide some enthralling race.

The first MXGP moto was a barnburner with Coldenhoff, Febvre, Gajser and Herlings all going for the win and two Dutchies battling at the front enhancing the atmosphere even more – this is what world championship motocross is all about!

Herlings took an incredible win despite getting landed on by Ivo Monticell on lap one and riding with a fractured shoulder blade, making some stunning passes emblematic of his intense desire to win and the raw talent he possesses to go faster than anyone else on the planet even when he’s injured!

When he wants it that badly there is no-one tougher in the sport and no-one faster, Jeffrey Herlings has incredible talent and speed but his heart and desire is just as impressive. However, it’s getting to the point where there are no words left to describe his bad luck.

Last year was a freak crash when he was managing the championship perfectly and this year he was the random person who happened to get landed on and now, once again, his fifth world title dream is hanging by a thread. Sometimes it just isn’t fair and you have to feel sympathy for the Dutchman who has been through so much already.

But how much more of this physical pain and mental punishment can he take – especially when he is doing everything right and not taking risks! And yet, still, he managed to gather up the desire, motivation and deal with the pain to win. That means he’s now won with a broken ankle and a broken shoulder blade added to the time he raced with a not yet fully healed broken femur and still almost saved his MX2 world title. Herlings is a phenomenon.

But Tim Gajser is avoiding the bad luck and riding smart. He didn’t get landed on and didn’t take risks in either moto – although he did go in hard on Herlings in race one trying to prevent the Dutchman passing! In race two he yielded to a flying Cairoli on the last lap, mindful he would still win the overall and if Gajser can stay away from the bad luck and mistakes that have befallen his rivals, he’s going to be very hard to beat- he doesn’t even look on the edge this year.

However, Tony Cairoli is putting his heart and soul into winning this tenth world title! A poor first moto obviously angered the Italian and he came firing back in race two in a devastating last five minutes that saw him go from fourth first in a brilliant display of determination and fitness. To run down two riders ten and 15 years younger than him and have more energy than both of them is testament to Cairoli’s work ethic, the guy is amazing and is just 23 points away from Gajser in the championship despite a DNF.

Jago Geerts got his season rolling again with a brilliant double win and now is seroiously back in contention for the world title after the top three on the championship all had poor first motos and didn’t have the pace of Geerts in race two.

But how about Kay de Wolf?! 16 years old and on the podium – and he still nearly won race two despite a crash. An emotional podium interview showed how much it all means as Holland keep producing world class riders – and de Wolf might be the next generational talent after Herlings. However it’s Maxime Renaux who has the red plate now and the man who has the most experience to get the job done – how he handles the next three races in a row will be a good indication of how he can handle the pressure of a world title fight.

EMX was also great. Former GP star Ken de Dycker showed some good speed in EMX Open while Rick Elzinga won the EMX250 class after a late race pass on a flying Liam Everts who was oh-so-close to a his first ever EMX2 race win – but he still got his maiden podium as the third generation Everts showed everyone he is the real deal. The talent keeps coming in EMX!

Is it time for Loket yet?