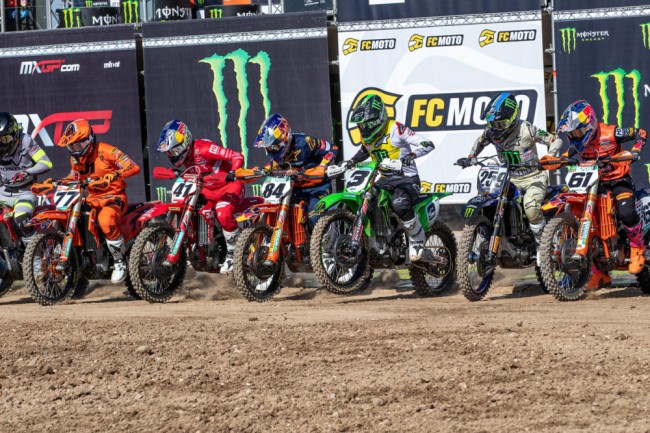 How was that for intense, hold-your-breath action and unpredictability? Yet more great racing in MXGP and all the title contenders got the starts and went to war with Jeffrey Herlings eventually coming out on top in Turkey.

The man-made track was nice and wide but intentionally rutted to keep the speed down and the technicality high however, it unfortunately became a largely one-lined circuit which made passing difficult – just ask Cairoli!

The Italian will feel the most frustration out of all the contenders but he can take comfort from knowing the speed was there for a podium. Although, even when he did get a good start in race two he didn’t have the intensity in the opening couple of laps and lost a couple of places before having to go to work to get back into the top three.

But then he came up against Prado who is quickly becoming his nemesis over the last year and a half! Prado is simply brilliant at riding under pressure, refuses to give in and sticks to his lines and sometimes figures out where to go to block his rival. Time and time again Cairoli has been thwarted by Prado and Turkey was no exception even trying to bulldoze his way through didn’t work and then he had the bad luck of running into a hay bale on the track and going down ending his chance of a top three!

That was an intense three-way KTM battle and Pit Beirer was probably watching through his fingers! All three want to be world champion and this time it is Herlings staying out of the controversy – but there is definitely a big rivalry now with Cairoli and Prado and it’s fantastic to watch.

Prado is just superb to watch (unless you are trying to pass him!). Extreme precision at all times with perfect technique even under maximum pressure, the only mistake he made all day was the one that allowed Herlings to pass him at the end of race two. He is looking a big rival now to Gajser for this title, he gained points again (13 behind) and those starts are back!

But Gajser showed he isn’t going away even after a poor sixth in race one after losing his rhythm trying to pass Coldenhoff. Tim has the mental strength to not let that spiral and he came out firing in race two to put things right and take some much needed points back, every time Gajser looks like he’s on the ropes he turns it around, that’s mightily impressive.

Romain Febvre is getting the chances but not delivering in the crucial moments to take advantage of his opportunities. He was right there in both motos but maybe just maybe, he’s that one percent off the other four when it comes to really making the moves necessary but the speed is there and it’s just the smallest of small details for the Frenchman, but he will be frustrated again after his day. The win and podium was there for the taking.

Pauls Jonass is now putting himself amongst the big five consistently and showing he deserves to be thought of in that company – but he was lucky to escape uninjured from that huge second moto crash! The Standing Construct team are getting the best out of the Latvian and he is absolutely flying right now.

But in the end it was Herlings who got the job down even when he started tenth in race two. Both motos he timed his charge perfectly in the last ten minutes to go 1-2 when it would have been easy to get frustrated, override the track and go down. 92 GP wins and 36 points down in the championship, he believes he can still win this title and he’s doing what he needs to do to slowly claw the points back – but even he admitted he has no margin for error!

In MX2 Tom Vialle showed his real pace again now he is healthy and now he has that win and his confidence back, it could be a long second half of the season for everyone else! But Maxime Renaux showed he is the real deal once again by setting the pace for Vialle to chase and taking the win when Vialle crashed with a couple of laps to go trying to put the pressure on.

Talking of pressure, Renaux doesn’t seem to be feeling any in the quest for his first world title, mentally he seems to be the most prepared to be world champion between himself, Guadagnini and Geerts and that could well see him take this title.

Rookie Guadagnini had a strong day as well to gain points on a very disappointing Jago Geerts who after arm pump surgery qualified poorly and had to come through the field in both motos. He now has a mountain to climb to be world champion in 2021 being 52 points back even though it’s not impossible if he can find his A game quickly.

After all the action the riders don’t have long to wait until the next round with racing again at Turkey on Wednesday. The big question is will there be more passing options? If not the qualifying session and starts will be absolutely critical again and passing could get very aggressive especially if some riders feel there are some scores to settle!