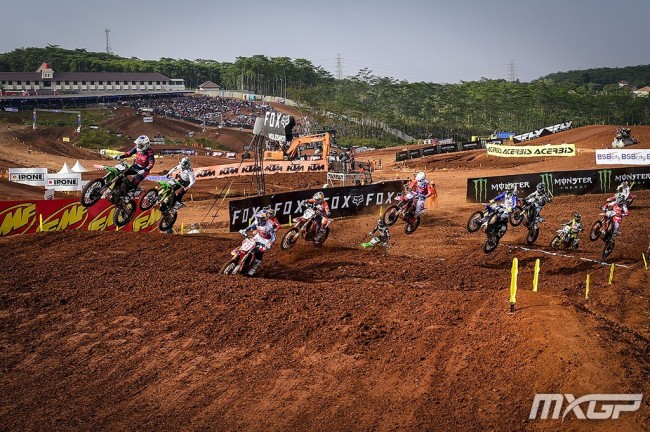 Good layout – poor preparation: The manmade track at Semarang looked fantastic and seemed to have a lot of flow for the riders to enjoy. However, some dangerous track prep with too much watering on hard pack, created a dangerously greasy surface for the riders and even the normally placid Jorge Prado was complaining that it was sketchy after winning his qualifier.

Sunday was a bit better in terms of how they watered it and, as the track became technical in the last set of motos as it roughed up and the riders seemed happier, but poor track prep during the weekend is becoming a big discussion point this season whether it’s sand or hard pack.

Domination: Both classes right now have two very dominant riders and while it doesn’t always make great racing at the front. it’s setting a high level for the rest to work towards. And when you see how Prado is riding in MX2, the prospect of an on-form Gajser against Prado plus Herlings and Cairoli it really is a mouth-watering prospect for 2020. Watching Prado ride a bike is a joy right now with his precision and intelligence, the kid is a very special talent.

Different riders up front in MX2: Despite riders like Davy Pootjes, Ben Watson and Mitch Evans missing the event through injury, there were still some names stepping up in their absence. Calvin Vlaanderen hasn’t wasted anytime in getting back up to speed following his broken leg and then infection as he took his first podium of the year while Maxime Renaux was very, very good in race two passing both Vialle and Vlaanderen to take second place, his best result in the world championship.

MX2 always seems to have that ability to surprise as hungry young riders, once they get confidence, can suddenly make good on their raw talent go to the next level which always makes it a very interesting class to watch even if Prado has control of the championship.