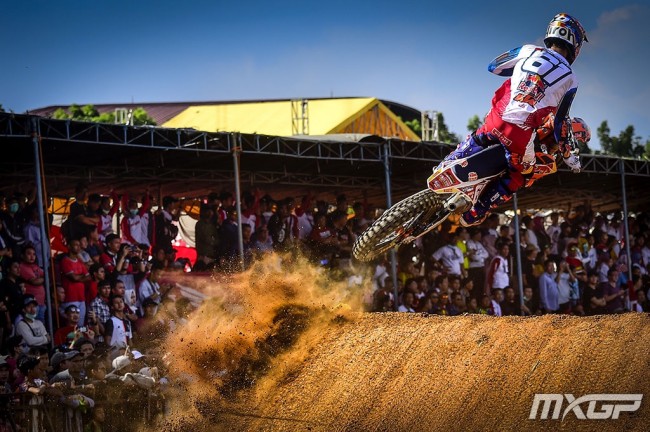 The track: I thought the track was decent, maybe a few too many jumps that limited passing opportunities but other than that it was a good track. It didn’t get rough with a lack of bikes and classes but for once, Youthstream thankfully didn’t level the track or grade it constantly between motos so by Sunday it became pretty good, especially the second motos. Man-made tracks get some criticism but if they are closer to the cities, provide a different technical challenge and still produce good racing then it’s fine as long as enough traditions tracks stay too. You need to ride everything and deal with travel to be the best in the world.

Prado challenged: Tom Vialle took the Spaniard out of his rhythm and it opened the door for a different race winner and gave hope to many in the class that Prado isn’t unbeatable if you are more aggressive with him. The teammate duel was eerily similar to Prado challenging Herlings back at Assen when he was 15 in his debut seasons, Herlings wasn’t overall happy with some moves Prado’s made back then but on Sunday the shoe was on the other foot and Prado didn’t seem overly happy with Vialle’s aggression on him! But, for a spectator it was exciting action and Vialle is really starting to believe he deserves to be up front.

Injuries: The MXGP class was missing the entire factory Kawasaki and KTM with injury and with no Simpson, Searle or Tixier etc it meant only 13 regulars lining up instead of what should have been around the usual 20 plus like the first round in Argentina. While you can’t do much about injury perhaps Youthstream need to look at a way of ensuring or helping fund the top 20 healthy riders in the class to overseas Grand Prix to keep the depth of quality and make a good show for the spectators. A global championship is needed, so rounds in Argentina, Indonesia, China and around the world are great, but you need the majority of championship regulars to go as well.