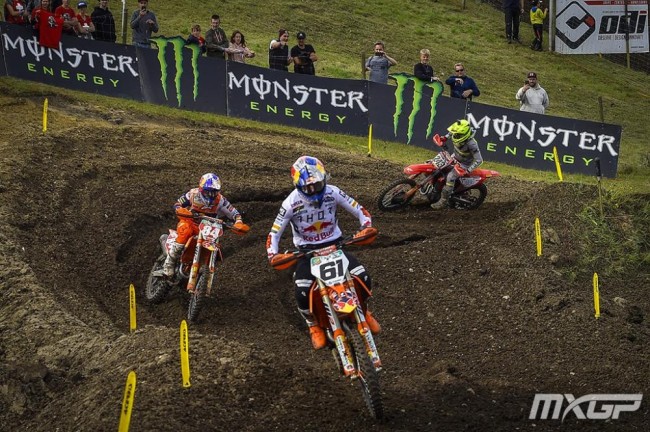 KTM’s colliding, Vialle losing a GP win due to a Yamaha protest and Gajser winning a GP three weeks after a broken collarbone, this is a world championship season that just keeps on giving!

But let’s start with the Prado/Herlings crash. Undoubtedly it was Prado’s fault, but I’m not entirely sure it was on purpose. It made no sense to jump across Herlings after he had won the race, so did Prado not know Herlings was that close?

Luckily both weren’t seriously hurt but it was Pit Beirer’s worst nightmare. One minute Prado wins one of the best races of his career, straight up passing Herlings for the win to go 9 points back of the world championship lead to Prado not racing the next moto and Herlings riding with a sore knee and losing the points lead to Gajser and Honda. Not good.

What a dramatic end to the first MXGP race! Watch the replay of the moment Jorge Prado and Jeffrey Herlings collided on the air!😱#MXGPGermany #MXGP #MX2 #Motocross pic.twitter.com/I6DwMk9fnk

Herlings at least is still in contention despite getting landed on twice now in one season! For once he didn’t break something in a crash, and somehow lives to fight for the world championship just two points behind Gajser heading to France this weekend. Prado is 31 back and not out of it but even if he can ride in France you wonder how competitive he will be able to be with that incident and how aggressive he will race others, especially Herlings after what happened. It’s been close before but this time what KTM feared could happen, finally happened.

For all the drama with the KTM duo it would be easy to overlook Tim Gajser. But we shouldn’t, that was an unbelievable performance so soon after a broken collarbone. A strong ride in race one was usurped by a brilliant race two including a blistering three rider pass in one brilliant move on lap one to take him away from Herlings and right on the rear wheel of leader Febvre.

From there, Gajser stalked the leader, Febvre, then made the move to take the moto win and a huge overall to give him back the red plate. This has to be huge for his confidence and the momentum in the series. Herlings has a big fight on his hands to wrestle this title off Tim Gajser with more hard pack coming up and a knee that might not be perfect in France.

Romain Febvre had chances to win both motos but yet again couldn’t quite do it. He’s only 8 points back but he has to start winning these motos when he’s in position to deliver. Consistency is keeping him in it but wins will be needed to clinch this title against Herlings and Gajser.

The drama wasn’t confined to MXGP but in MX2 it was off the track! Tom Vialle won both motos besting his in-form teammate Rene Hofer in race one and holding championship leader, Renaux, off in race two. But then Yamaha protested saying Vialle jumped on a waved yellow giving the win to Renaux and Vialle furious. Renaux said it wasn’t how he wanted to win while also saying he did lose time when Vialle jumped and he didn’t, as a furious Vialle insisted he didn’t see the poorly placed yellow flag!

Vialle is already up to fifth in the series but the duel between him and Renaux as to who is the fastest in the class might get a bit more heated from here on out!

Only 6 days left until we see the next installment of a riveting world championship drama in France.