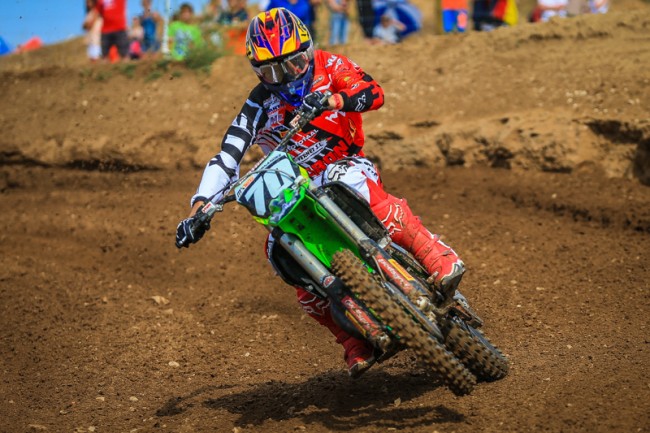 In stifling hot and extremely dry conditions, the young racers gave it their all on the rock hard clay in bid for the top qualifying positions and early advantage for the main events tomorrow.

Skating was the name of the game in the first practice this morning with the Junior 125cc Group A being the first class head to out onto the track. Due to the heat, the track had been constantly watered from the early hours of the morning in effort to keep the dust down. Despite being saturated, by time the qualifying sessions had come around it was already really dry and dusty.

Although he wasn’t the fastest in free practice, once the surface had dried out it was Spain’s home riderRuben Fernandez Garcia who looked right at home as he power slid his way to pole in the Junior 125cc Group A. “I might have a little bit of an advantage because I am used to these conditions, but everyone is fast anyway” the Spaniard said.

In Group B, France’s Mathys Boisrame was the solid bet all day. Boisrame had the track dialed both in moist and dry conditions as he topped the charts in Group B’s free practice and qualifying. “I took a while to make a fast lap time in the timed practice, everyone can ride almost the same speed around this track, there is nothing really difficult to make the difference. But near the end I made the fastest lap time. I know it is just timed qualifying though, racing is always different.”

KTM Factory Junior’s Conrad Mewse was also laying in some super fast laps. The former Junior 85cc World Champion looked comfortable throughout the whole session but it was shaving around one second off of his lap time on a last lap blinder that shot him to second place in Qualifying Group A.

Finishing 0.300 behind Boisrame in Group B was Australia’s Hunter Lawrence. Lawrence led the way out onto the track in the qualifier and went right to work. The Aussie initially was the one who set the pace in that group before being over taken by the Frenchmen Boisrame and Bourdon, while he couldn’t quite match the pace of Boisrame, he did get Bourdon back to finish second in Group B.

Rounding out the top three in Group A was the Italian Davide Cislaghi, who is known for his ability to start in the European Championship EMX125. If Cislaghi can be consistent in his lap times tomorrow and get a blistering start, which is normally the case for him, a good result should be in the works.

The third fastest in Group B was Anthony Bourdon who also appeared to be enjoying the clay and constant change in elevation here in El Molar, while KTM Factory Juniors’ Spanish young gun Jorge Prado only set the tenth fastest lap time in his group, group A, 1.8 seconds off the fellow Spaniard Ruben Fernandez Garcia who was the fastest.

By the time the 85cc riders zipped out on track for their timed qualifying session, it was already very hard, dry and slick. Nevertheless, these kids weren’t scared to get hard on the gas and let the rear end step out as they pinned it for pole.

This amazing track was a playground for France’s Brian Moreau who was reveling the hard surface and elevation as he rode the wheels off of his Kawasaki 85cc for pole.

Even though Dutch riders are said to be sand specialists, Holland’s Rick Elzinga proved he can ride clay just as fast when he set the second fastest time of the session. While Denmark’s Bastian Boegh Damm was third only fractionally slower.

With next to nothing separating the laptimes in the top five, Austria’s Rene Hofer was fourth ahead of Czech Republic’s Petr Polak.

It was a surprise start to the weekend for JD19 KTM Racing TE’s Adam Kovacs who had his little 65cc wide open here in El Molar. Kovacs said he struggled with the heat a little bit and couldn’t believe he set the fastest lap time after landing hard off of a jump and breaking his bike. Despite facing a few problems Kovacs set a blistering pace and took pole 1.2 seconds clear of Kay Karrsemakers.

As for Karrsemakers, another Dutch rider who prefers excels on the softer surfaces, he was also looking super fast on the blue groove clay regardless of his roots. The young Dutchman was second in qualifying ahead of Czech Republic’s Radek Vetrovsky who was the fastest in free practice.

Rounding out the top five, a Spaniard, Raul Sanchez Garcia flew the flag for the hosting nation with his fourth place finish while France’s Florian Miot was fifth.