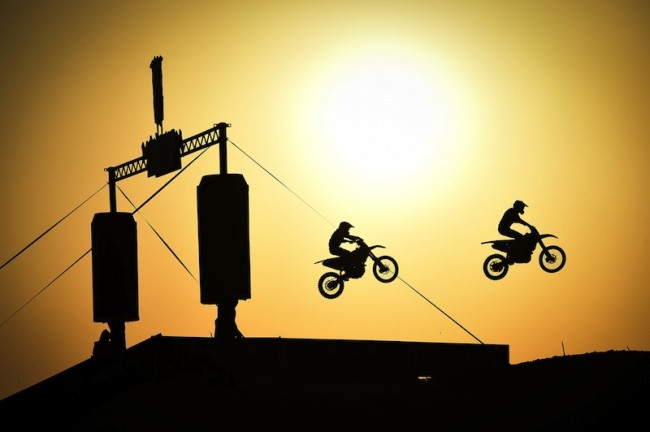 LOSAIL (Qatar), 25 February 2016 – The wind is already racing here in Losail, Qatar on the heels of yet another stellar season of FIM Motocross World Championship racing. With it all about to kick off tomorrow, a media opportunity was held at the Katara cultural village in Doha, Qatar’s capital.

Mr. Giuseppe Luongo opened, “We are excited to be here in Qatar, it makes sense to come here because it guarantees great weather and great organizers which will make it a great race to open the season with. Also this year we have two new events to look forward to, one is apart of the MXGP season, the MXGP of Americas in Charlotte which will be a great show and excellent for the fans and then we will close the season with the Supermotocross Riders’ and Manufacturers’ Cup, which is good to give something new and different to our sport.”

Mr. Khalid Al Remaihi said: “I would like to say thanks to all the media. You play a big role in our sport with the promotion and the good coverage. I also want to thank all the riders and teams and everyone involved. Here in Qatar our main objective is to promote motorsport so we feel really lucky to have one of the best series’, MXGP, here in Qatar.”

Mr. Abdulrahman Al Mannai: “I’m a big fan of motocross. It’s a big challenge but we are passionate about this sport and we are so thrilled and looking forward to the journey we will make together.”

Mr. Tony Skillington rounded up the word from the officials: “It’s an honor and great pleasure as always to be amongst you, I’m very excited for it. There will be a few new changes this year one of which will be that body armor is compulsory and if you are a rider this should be music to your ears that the FIM is being proactive in making our sport safer.”

The riders rounded out the press conference with these statements:

“I feel really good, I had a little issue with my elbow but I only missed a week of racing, I am happy to be here, in shape and ready for the new season again.” – Monster Energy Yamaha Factory Racing’s Romain Febvre.

“I feel really good, I had a good winter and did a lot of testing and everything went well for me. I am happy with the 450cc, I feel comfortable and I’m really looking forward to the first round.” – Honda Gariboldi’s Tim Gajser.

“I have some great memories from here last year, but every year you start is new. I also had good preparation this winter with no injuries so that made it really good, I also have a new bike so we had to work a bit on the set up, but it’s going great and I am really happy to start the new season.” – Rockstar Energy Husqvarna Factory Racing’s Max Nagl.

“I spent a lot time in the winter in the USA with my new trainer, but it’s not so much different, we will see on Saturday night. I am really happy to be here in Qatar.” Team HRC’s Gautier Paulin.

“I will see how I feel this weekend because I had an injury and I missed five weeks of riding which is a lot at the beginning of the season but I was feeling really good before I crashed, but this is apart of the job. I hope it will be ok, you never know, I can maybe get a good start and hang on, you never know what can happen.” – Red Bull KTM Factory Racing’s Antonio Cairoli.

“Obviously I have two seasons of injuries but now I am feeling 100% physically fit. I had a great winter, we did a lot of testing and we have made the bike way better and we have had a good run so far. It’s going to be a long season, this weekend is just one of eighteen rounds so the plan is to go out there, have fun and see where I end up.” – Red Bull KTM Factory Racing’s Jeffrey Herlings.

“I broke my arm two weeks ago so my goal is to take some points, I will see how I feel tomorrow, I am not so happy to start like this but I will try to make it positive and the season is very long so I just want to improve myself from the problem I had two weeks ago. I am excited for the new bike and the new team so I’m excited to be back.” Monster Energy Kawasaki Racing Team’s Clement Desalle.

“I’m excited to be here, it’s been more than ten years since I have been sitting at a place like this and its grown mentally. I’ve been pleasantly surprised at how it’s all gone and I just want to get started. I just want to go racing, I’ve had this flame inside me for about a year now, I went to the motocross of nations not just to race for my country but to see if I can get a ride and I was able to do that so hopefully I’ve had enough practice and have the fitness.” – Suzuki World MXGP’s Ben Townley.

To wrap up the day Youthstream’s Director Communication and Marketing Services, Mrs. Marionna Leiva went over a few important statistic such as the increase of television audience which as a result has driven www.MXGP-TV.com to broadcast all of the racing, both Saturday and Sunday, LIVE in 2016. This includes all of the races from the FIM Women’s Motocross World Championship and the European Motocross Championships as well as the qualifying races for both MXGP and MX2.

In addition, the Studio Show hosted by ex FIM Motocross World Championship star Paul Malin and MXGP-TV presenter Lisa Leyland, will also be LIVE and FREE to all viewers. It will be screened on www.mxgp-tv.com as well as the MXGPtv YouTube channel www.youtube.com/mxgptv.

It’s been a busy but full filling day here in Qatar which has left everyone buzzing and ready for yet another season of none stop motocross action. Watch the qualifying races LIVE tomorrow night on www.mxgp-tv.com