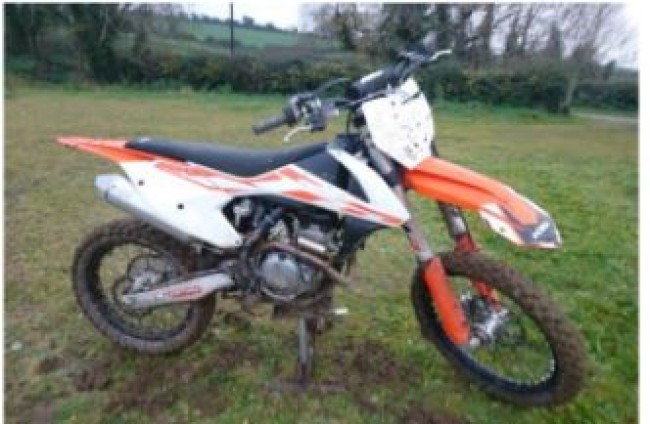 Chris Bosanko has developed a Syvecs ECU for his 2017 250f KTM over ten months in order to adapt the machine to his liking as well as create a base product for a potential future career.

Chris, this is a very complicated project so what is your background that allows you to do this and how did you get into motocross?

I first started to ride motocross when I was around 3 on a PW50. I only ever did it for fun as a kid but when I turned 17 I did a bit of racing in the Ulster and Irish championships. I had a few good results but also a few injuries mainly hurting my knee quite badly. I studied engineering and combining my love for motorbikes I would tune engines as a hobby. This turned into a full time job working within high end motorsport as a development engineer. In this field of work you see a lot of technology that the average person doesn’t even know exists. I currently work for a company specializing in developing turbocharged race engines. Currently we make around 600HP from a 1000cc engine in our race cars.

What gave you the idea and how long has it taken to develop?

I have used this technology for several years now and wanted to try it on something that has never been done before. I love to have something that nobody else in the world has. From initial concept to where the project is now has taken around 10 months. If it was a full time job I could speed up testing considerably but can only ride once a week at the minute.

How do you see this project progressing on your own machine and would you like to break into the industry with this product?

I will continually develop the bike but in the future the rider will be the limiting factor. I believe there is only so much that a human can do and this limit will be reached long before the technology is limited. In terms of bringing a product to the industry it wouldn’t be something for the average person. The ecu has similar capabilities to that used in Moto GP and it wouldn’t be something that you could learn to use easily. If a team or manufacturer wanted a setup like this that would be different but it would be a full time job offering technical support. Ultimately KTM would be the best place to offer this technology because they would have the capability to add some of these features to their production bikes.

Chris talks about his creation below:

In 2020 I undertook a project to develop my  KTM with the most advanced electronics available. Working with this technology in my job as a motorsport engineer I wanted to see if  I could make a motocross bike better and  develop something which isn’t available to even the best in the world.

I could have just plugged a GET ecu (or similar)  in and mapped it but then I wouldn’t be  gaining anything new. The project centred  around the use of a Syvecs ecu. Everything had to be made from scratch. The wiring loom had to be  modified and lengthened, wires had to be added for the additional sensors and one off parts had to  be machined.

Once all of this was finished the hard work started. When developing an ecu that has never been  used in the motocross world you are literally starting from a blank page. Every sensor needs  configured, ignition and fuel tables need written and strategies/compensations have to be  implemented. Within the software there are literally thousands of settings and every one of them is  vitally important.

While retaining all of the standard functions they were modified to improve their operation.

The additional sensors added open up a whole range of  adjustability and function to improve the feel of the bike. A very  important feature was to implement 720 sync. This means that  the fuel is only injected on the intake phase. It helps to increase  throttle response and it reduces fuel consumption by around 20%  also reducing emissions by a similar amount. Another unexpected  benefit was a slight reduction in noise from the fuelling being  optimised.

A baro sensor was added to adjust fuelling with changes in altitude. Knock sensors were also used to  add a layer of safety to the engine. A wide band lambda sensor was also employed to monitor  fuelling and also adjust when conditions warranted. Secondary injection was added and is proven to  increase HP in the higher rpm.

One of my favourite features is gear cut. This is a closed loop setup which allows for gear changing at  100% throttle and in testing proved to be very effective on long straights. In combination with the  gear cut, staged launch control is used for the starts. This is done through a clutch switch and differs  from the standard system by being able to adjust revs against time and gear. It can also be used in  conjunction with a GPS unit.

The Syvecs ECU has full time data-logging in-built, meaning there is no need for an additional unit.  Every parameter and sensor can be logged and monitored at speeds of up to 1000HZ (1000 times  per second). This gives the best data catch and allows much more refined changes to be made for  each individual rider or track. The data can be downloaded and checked at the track within seconds,  changes can then be made for the next practice or race, based on rider input and associated data.

After initial testing the only way to describe the bike is SMOOTH. Throttle response is predictable  and controlled were before the bike would spin or become unsettled but now traction is in  abundance. While using gear cut you find yourself in a gear higher down every straight due to the  fact you hold a much higher throttle average. And then there is the engine breaking. This has been  reduced to almost nothing and mimics the cornering of a 2 stroke. A great benefit is the ability to  look at the data after every moto. You can see where you are over revving the bike or in the wrong  gear. It also never lies. When you tell someone pinned down the back section and look at your  throttle trace and it says 80% you know you have some work to do. I could see this feature being a  great tool for young up and coming riders to help guide them to riding with better technique.

As with any project it is always evolving. The results I have attained at this early stage are very  promising and with the project at around 85% complete the last 15% should improve the bike  beyond my expectations. Will this system make the bike ride itself, definitely not but it will make it  much easier to get the most from your machine. It would be comparable to when everyone made  the jump from 2 stroke to 4 stroke due to how much easier they were to go fast on.