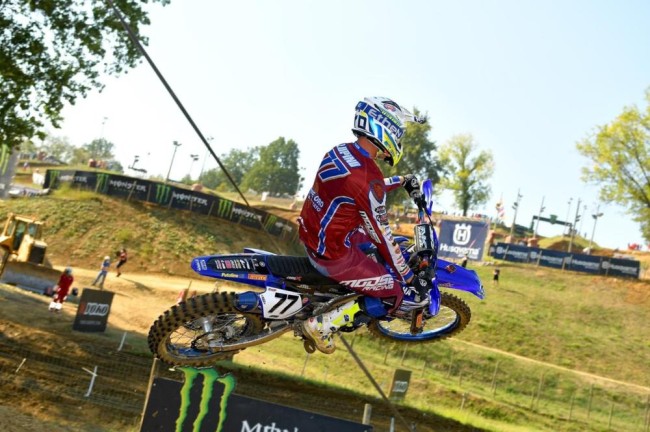 With the third MXGP event taking place at Faenza within the space of a week it’s been intense but the final of a triple Grand Prix at the Italian track was very positive for the Gebben Van Venrooy Racing – the best GP of the year so far for the team.

It’s been clear that Alessandro Lupino excels at the slick hard pack track of Faenza but he upped his game and improved yet again for round eight of MXGP. In the first moto, Lupino took a fantastic start as he was in fourth at the end of the first lap and looked comfortable running the fast pace at the front of the field. On the last lap Arminas Jasikonis just pipped Lupino for sixth but the Italian can be happy with his well-earned seventh beating several factory bikes.

Calvin Vlaanderen also took a good start in the first moto but the MXGP rookie isn’t yet used to the pace and intensity during the opening laps of what was a frantic race. In the end Vlaanderen came home a solid fourteenth. Unlike his two teammates, Thomas Covington didn’t get a good start as he was buried in twenty-third on the opening lap, but he battled through to take points in eighteenth which positive for the American.

Unfortunately, in the second race Lupino couldn’t replicate his amazing start of moto one as he was just outside the top ten but showed good pace and lap times to get himself up to tenth to secure ninth overall – a brilliant result and on a private bike!

It wasn’t a good start for Vlaanderen in race two, but he rode wheel on his Gebben Van Venrooy Racing Yamaha to come from nineteenth to a solid twelfth and actually better his result in race two. Things are going in the right direction for the MXGP rookie. Unfortunately, Covington got an even worse start in race two but feeling more comfortable with the track he managed to come through from twenty-fourth to sixteenth – his best moto so far of the season and the first time he’s scored points in both moto’s. Like Vlaanderen, things are going the right direction for the young American.

Alessandro Lupino (9th overall): I’m really happy, the first moto was unbelievable. I had such good speed to stay with the guys at front. The second moto the start wasn’t as good so I had to push harder from the back but we have to be happy about the result. To get ninth overall with so many factory bikes in MXGP – to beat them, it means a lot. It shows that the team do an amazing job and it’s not easy to beat them. It’s our goal and I have to thank the team for all the hard work. I am really looking forward to racing at Mantova in two weeks now. I feel that now I can push 100% every time.

Calvin Vlaanderen (13th overall): Another race, another step forward and some more improvements. I think we improved a lot on the bike with the starts as you could see in the first race, we had a really great start. I was not used to the pace up front and I got shuffled back very quickly, getting passed left, right and centre. It was difficult to regroup and get a rhythm after that, it was a tough race. In the second race I started at the back, but I could fight with good lap times back to twelfth which was good. Unfortunately, I couldn’t show these lap times in the first race but we will take it and learn. We will improve for the next race and we look forward now to Mantova.

Thomas Covington (16th overall): Today was a good day for me. Again, we made some progress and gained more confidence in the bike. With a better start I think I am capable of a better result but I’m happy with how things are going now. Feeling more like myself on the bike and we’re again one step closer to where I want to be.