Preview: Lille supercross this weekend & Jake Nicholls is in! 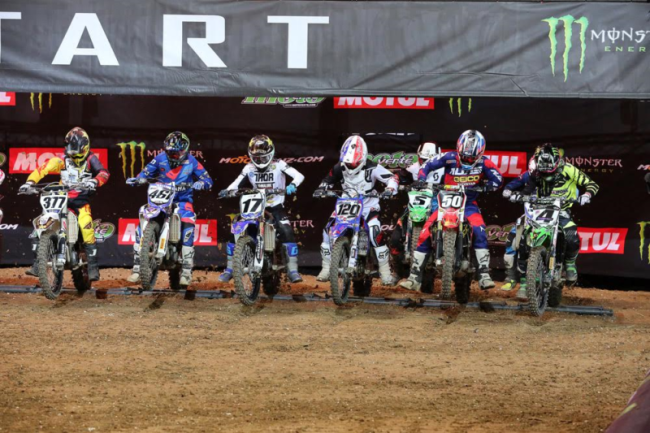 PR – The famous Paris Bercy Supercross moved to Lille three years ago, and the French event remains the main and most popular SX outside USA. Justin Barcia, Marvin Musquin, Malcom Stewart and Christian Craig already crossed the Atlantic Ocean and will be with Romain Febvre the favourites of the event.

Winner of the Red Bud Straight Rhythm and on the podium at the SMX and at the Monster Cup, Marvin Musquin is in great shape and will be back in his native country for the first time since he triumphs at the 2015 MX of Nations with the French team and Romain Febvre. The French riders are among the favourites of this 34th Supercross; Marvin is racing the 450 class since one year and recently proved that he’s one of the faster rider in the US, while Romain improved his SX skills since last year and won a few weeks ago the European SX title.

Both Justin Barcia – twice winner in Bercy – and Christian Craig will race for the first time with their new bikes, a JGR Suzuki for Justin and a Geico Honda for Christian who will be team mate with Malcom Stewart. It will be third year in a row that Malcom raced in Lille.

All the French Supercross riders usually involved in the SX Tour will line up in Lille; Thomas Ramette, Cedric Soubeyras, Fabien Izoird, Xavier Boog and Valentin Teillet are some of the French SX leaders, and they will be joined this weekend by Jordi Tixier who always enjoyed racing Supercross. A strong British team will be there with Tommy Searle and Jake Nicholls in the SX1 class (and also Joe Clayton in the SX2) while Italians Angelo Pellegrini and Matteo Bonini and Swiss Killian Auberson will represent Europe.

The SX2 class is as usual part of the program, and three wild cards will join the usual SX Tour protagonists; Americans Ryan Surratt and Jake Masterpool, and German Brian Hsu will raced against Florent Richier, Arnaud Aubin, Thomas Do, Yannis Irsuti and many more. In both classes the program is similar with two qualifying heats, one last chance race and the main event; in the SX1 class ten riders will enter a super pole session, but the result will not count for the final classification.

The FMX show will be more exciting than ever with Edgar Torronteras, Matt Rebeaud, Brice Izzo and Genki Watanabe. But there will be also some huge novelties in Lille, as Swedish Daniel Bodin is coming with his famous snowmobile while Slovenian Ales Rozman brings his KTM quad in the French stadium!

You can get tickets here.