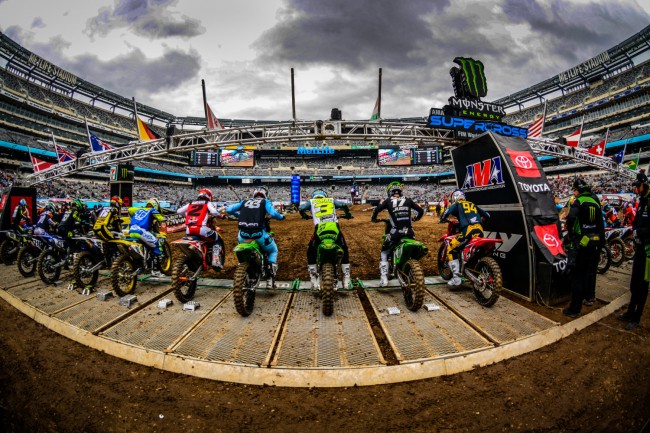 Jonathan McCready: As usual it’s going to be a hard choice with a lot of riders having the potential win races, but can they be consistent? Yet again Eli Tomac was probably the fastest guy last year, but his bad races really cost him in contrast to Webb who was barely out of the top five all season long.

But this year, surely, is the year Tomac aligns consistency with speed?! Into his late 20’s now, Tomac may not have many years left to ride at the level he is with that blazing speed so you would think he will have figured out the pieces to finally make this happen. He might even just come out swinging on Saturday night at Anaheim to show that, with a good off-season behind him, he doesn’t want to give the rest of the guys (including his new teammate Cianciarulo) hope and confidence, like he usually does at the start of the year.

If Ken Roczen can get back to his old level and stay healthy, I think he could be the only man who can win this title by matching, or sometimes bettering the raw speed of Tomac. Roczen even at the level he was last year before the health issues was a contender so he should be there or thereabouts anyway, but if he wins a race and gets that momentum going again he could be the thorn in Tomac’s side all year, if his health allows.

You can never count Cooper Webb out and despite all the pressure and having achieved a childhood dream in 2019, Webb with some good starts and his grit and determination should be able to contend for the title once again. Whether he can match the raw speed of an in-form Roczen or Tomac remains to be seen, but like last year, he might not have to if he has the rest of the pieces of the puzzle in place and goes fast enough to let them make the mistakes.

Add in a very fast and confident rookie Adam Cianciarulo, a motivated Zach Osborne, former champ Jason Anderson, Justin Barcia, Aaron Plessinger, Martin Davalos, Justin Hill, Malcolm Stewart, Justin Brayton, Dean Wilson and more who can all run up front on their day, and in some cases, if they find the consistency contend for race wins if not the title, it’s going to be a explosive series of intense action for as long as they all stay healthy – and that’s without the already injured Marvin Musquin, Joey Savatgy and Max Anstie!

Andy McKinstry: Pfft making predictions for the Supercross this season is incredibly hard, there’s so many riders that have the potential to win and will be going into the season feeling they have the goods to perform and stand on top of the box. As we saw last year, consistency and starts are very important in Supercross – Webb was absolutely superb last year and thoroughly deserved his title. This year Webb is under pressure to perform from the outside and that might be a factor, last year there weren’t too many people predicting him to win and in a way that helped take the pressure off.

There’s no doubt that Eli Tomac is probably the fastest rider but the fastest rider doesn’t always win titles as we’ve seen in the past – the Kawasaki rider is going to have to get better starts and perform better under pressure in 2020. Having said that, I think this will be the year everything clicks for Tomac and he’ll finally clinch that SX title – if he doesn’t do it this year it genuinely might not happen!

Everyone seems to be forgetting about Jason Anderson despite winning the title in 2018, he has little pressure this year and shouldn’t be too far away from the front. When it comes to the title, I believe Ken Roczen is the guy that can stop Tomac from winning but needs to ride smarter than last year – he simply had a few race wins in the bag but threw them away on the last few laps under pressure, I do think we’ll see a different Roczen this year and a better one!

The rookie to watch has to be Cianciarulo, he was very good at the Monster Cup but perhaps that performance came too soon and will go into the season with too high of expectations now? However, as a rookie he has little pressure and shouldn’t be far away – it’s all about learning for Cianciarulo this year and I don’t see why he shouldn’t grab a race win throughout the long Supercross season.

Add in the likes of Stewart, Barcia, Osborne, Reed, Brayton, Wilson, Barcia, Plessinger, Baggett and Davalos – the SX season is stacked! No doubt there will be injuries though so it’s going to be important to stay healthy throughout the course of the season.