Prado wins in Semarang – tied on points with Jonass in the series! 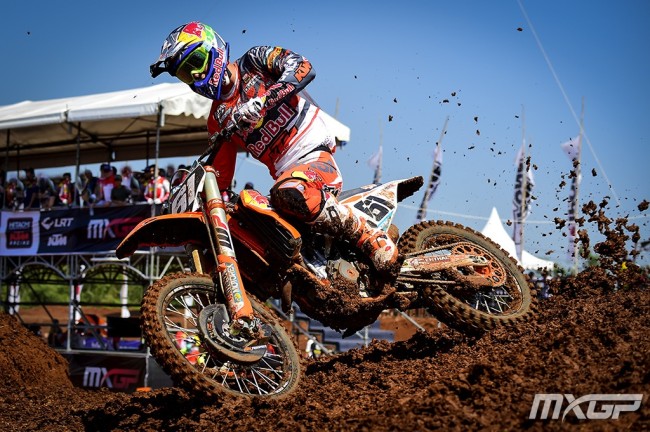 Jorgo Prado won round thirteent of the MX2 World Championship to close down championship leader – they’re now equal on points! Jonass will keep the red plate for round fourteen in Loket as he has more moto wins than the Spaniard.

However, that doesn’t tell the whole story about the GP in Semarang. Pauls Jonass crashed at the end of the first lap of moto one and came from more then five seconds behind Prado to catch and pass him to dominate the first moto.

In the second moto, it all went wrong for Jonass as he tried to go up the inside at the start but he lost the front end and was buried in dead last. The MX2 World Champ came from last to sixth to secure second overall. The Latvian will be frustrated as he had the speed to go 1-1 this weekend but with Prado winning the second moto they’re tied on championship points now. It looks like the championship will go right down to the wire.

It looked like American, Thomas Covington was going to end up third overall but Calvin Vlaanderen passed him on the final lap to secure third overall. The South African continues his good form after winning round twelve.

Ben Watson again missed a podium with a fourth overall – that seems to be his position this year!

Kemea Yamaha’s Anthony Rodriguez had a good GP as he ended up sixth overall.