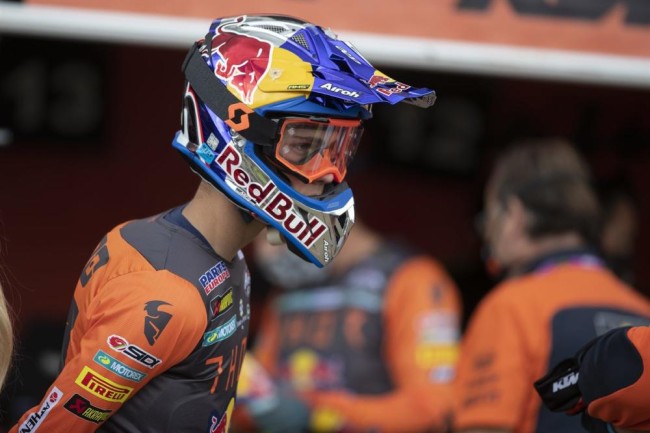 Jorge Prado has released a lengthy statement conveying his disappointment and disagreement with the two place penalty he received along with Romain Febvre and Gautier Paulin for jumping on a waved yellow flag.

Prado of course lost the GP win and said on social media: “Hello everyone, I would like to explain what happened yesterday; After declaring myself the winner and at the end of the press conference, a member of the FIM personally informs me that I have been sanctioned with two positions and 4 points for jumping with a yellow flag.

“With this sanction, the end result remained the same, although, because of what it costs to earn and that each point counts I went to the FIM to explain my situation. I understand that the flag is appreciated on television, but I tell you that from my position I have a blind angle. There’s only one marshal on the right instead of both sides. I make this appreciation because there are two more races ahead of us and what I intend is that we have greater visibility to be able to react in time.

“My surprise is accentuated when approximately 1 hour and a half later, I am communicated by a member of my team, who penalize another pilot and change everything again, leaving me in 3 position. In case so much change had not been enough, we are also asked to repeat the podium. Fact I imagine is the first time it’s happened (and I hope it’s the last one).

“I want to make it clear that the really important thing is not to do first or third but to play our lives. Safety is the main thing, and if all the pilots sanctioned have said we didn’t see the flag, the FIM should take action. Last night, when I arrived at the hotel I saw that @gautierpaulin explains with a video that jumped with a yellow flag (which he did not see) and without any pilots on the ground.

“Besides, @romainfebvre says we’re professionals, and we’re not going to play the guy for nothing. I hope we’re heard. But if you listen to us… do we change the podium for the third time? I ask for maximum safety, seriousness and professionalism for all pilots. I want this to stay in an anecdote. Thank you all.”

You can see the Gautier Paulin video of the incident here.