Prado on USA: I think I am a rider that can adapt quickly to supercross 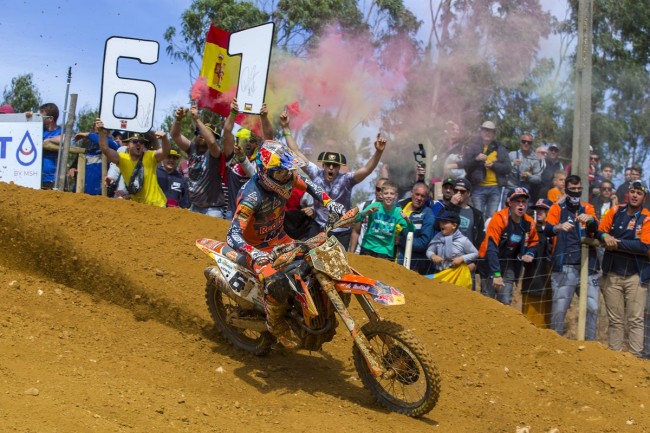 MX2 World Champion and current series leader Jorge Prado is facing more questions and speculation about his future after the Red Bull KTM rider claimed his fifth Grand Prix victory of the season last weekend in Portugal and is unbeaten in all ten motos he has contested in 2019 so far.

If the eighteen year old successfully defends his MX2 crown then he is obliged by the regulations to move into the MXGP class. Prado – who is contracted to KTM for another two years – faces two choices: maintain his strong link with the De Carli faction of the Red Bull KTM team and his base in Rome for the 450 SX-F or consider 250SX and 250MX competition.

Prado has blossomed emphatically under the guidance and knowledge of Claudio De Carli and his crew and with training partner Tony Cairoli filling the role of mentor. The Spaniard – already with 21 Grand Prix wins – also spent almost two months in the USA at the beginning of 2016 riding the Supercross tracks and training facilities on the west coast with the goal of tackling the AMA contest.

“It was a dream and it is still kinda there,” he said exclusive on the chance of moving to the USA. “Will I be here [in GPs] forever? Who knows? It depends on the deals and KTM are treating me very well over here so I cannot complain. It would be a great experience to go there and do something different. I don’t know how it would be but for sure KTM would put me in the best hands possible. I don’t have a doubt about that.”

If Prado wants to continue racing and learning on the 250 SX-F then a transatlantic hop is mandatory, assuming that he brings home KTM’s twelfth MX2 championship since 2004. “If I want to stay on the 250 then the USA is the only possibility,” he underlined “but we’ll have to see how it all develops.”

#61 has already had the chance to size-up the competition on the 450s. “I raced the Nations with the 450 guys and the Internazionali D’Italia – which was three races – and I got to see the level,” he explained. “For sure that was not the same as a GP but I was 3rd three times on my 250. My speed is not too bad. I will still need to improve a lot and get a lot stronger. The bike will be more demanding. We’ll have to work a lot. It will be a big step but I’m in the best hands; if Claudio [De Carli] says I am ready then I am confident I will be.”

Prado is remaining non-committal and has spoke repeatedly of the benefits of the De Carli/Cairoli connection, which means racing in MXGP alongside the leader of the premier class and Jeffrey Herlings is not a daunting or undesirable prospect. At the same time he is not overawed by the challenge of Supercross: something that has bitten recent converts Hunter Lawrence and Thomas Covington. “I think I am a rider that can adapt quickly to supercross, well I expect to if I go there,” he says. “I had one month on the 250 there when I was fourteen and my speed was OK and I could do the whoops without a problem. Now I am way-more strong and more confident with the bike. I don’t think it will be a big risk for me to go there. With more experience I could adapt quicker. Or maybe I could go in a few years and direct to the 450s.”

Prado does not celebrate his 19th birthday until January 5th.