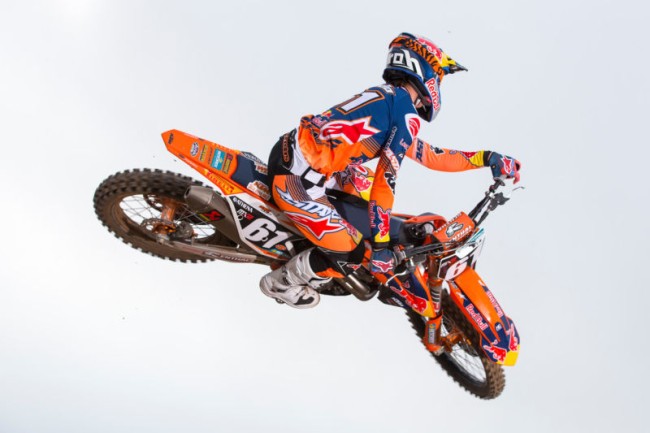 This week two factory MX2 riders with contrasting backgrounds, were asked to give their thoughts on the debate between AMA racing and the MXGP world championship.

Both 16 year-old Spaniard Jorge Prado and 21 year-old American Thomas Covington gave an honest view of their experiences, and it made from some interesting reading.

Covington gave up a Pro Circuit Kawasaki ride in the USA to race GPs, and, speaking to Geoff Meyer at MXlarge, said he still struggles on the different types of tracks in world championship racing.

“I am really good on a nice smooth track with big jumps, and then we go to places like Lommel, or even hard pack places like Loket, that is something I wasn’t really used to before,” admits the friendly American. “But we have been doing a lot of time in Europe in the winter, getting comfortable on those types of tracks. Like here in Spain, it’s super hard-pack. Not too often you get a really nice ripped track like you get every day in the US.”

Covington also believes that MXGP is getting bigger in America and the respect for how tough the series is has grown since Villopoto raced it in 2014. ” I don’t think they did before (understand MXGP level), for sure not four or five years ago, but when Villopoto came over, and me racing over here the last couple of years. People have been watching a little bit more, so they understand the way it is. It is a completely different ball game. If somebody from the US came and tried to race a season here, they would struggle, and the same if a GP guy went to America to race. It’s difficult to get used to the tracks, but also the life-style.”

You can the full interview with Covington, and his hopes for the season, here.

Jorge Prado of course spent last winter with the TLD team in the USA trying supercross and riding on some of the motocross track in California. He admits it is more different that it looks. “When European riders go to the USA they don’t do well and when Americans come to Europe they aren’t that fast either. Each place has its tracks and it is almost a different sport so you have to prepare specifically for that. It is hard to compare.”

Prado says he wants to go to America only when he reaches the top in GPs. “To race supercross you have to practice so much, have a perfect pre-season and by the moment that seems hard. Right now I am focused on the GPs and in my season, and if I end up going to the USA it will only be to do good, already being a World Champion or with a high enough level as well as preparing specifically to race across the pond.”

You can read the full entertaining interview with young Prado here.

It seems America requires a specialised approach to their unique style of racing while the world motocross championship seems to require a great deal of versatility. But it is appears there is now a growing mutual respect and greater understanding between both series for the unique attributes required to succeed in either, and that’s how it should be!