Prado and Vialle on the MXGP of Asia 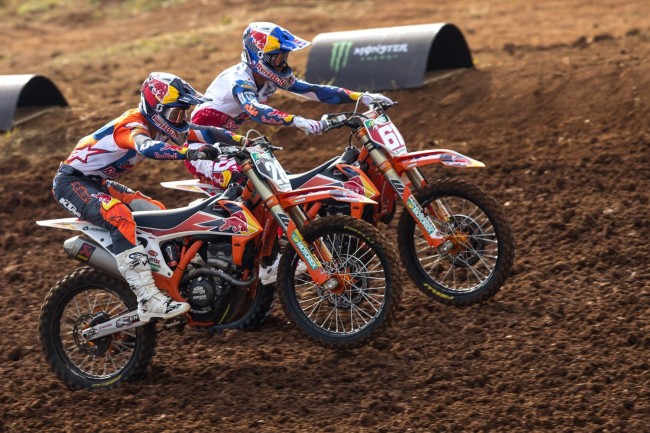 The MXGP paddock remained in Indonesia this week in preparation for the second Grand Prix in the country and seven days after the popular event at the new Palembang circuit. For the second year in a row the red hard-pack of Semarang was again host to the FIM World Championship and Red Bull KTM – who owned both classes at the venue in 2018 – were victorious.

The team missed Jeffrey Herlings and Tony Cairoli for the third meeting in succession but KTM were encouraged to see Standing Construct KTM’s Glenn Coldenhoff and Max Anstie figuring among the leading positions and taking 4th and 5th overall respectively in the MXGP division.

Jorge Prado and Tom Vialle remained aloof in the 2019 FIM MX2 World Championship for the third Grand Prix in a row thanks to their speed and excellent starting prowess on the KTM 250 SX-F. Across a rough and fast track at Semarang both the Spaniard and Frenchman posted scores sufficient to go 1-2 on the overall podium once more after similar feats in Germany and Palembang last week.

Prado was unbeatable and with his two clear-cut triumphs at Semarang now has 20 chequered flags from 24 (the world champion has started 22 races this season, meaning he has only lost two motos all year). Tom Vialle flew to 2nd place in the first sprint and was part of an unpredictable battle for the final podium spots in the second outing. The French rookie secured his fifth trophy of a brilliant breakthrough campaign with 4th position by the end of the 30 minutes and 2 laps distance.

After their impeccable Indonesian results Prado now has a 78 point lead in the MX2 standings while Vialle has risen into the top three for the first time.

Jorge Prado: “I made two very good motos today and felt better in the second one. I had a good flow and lap-times for half of the race and then started to feel a bit dizzy so I slowed down and kept riding. So I’m happy for the weekend. The track preparation was better today; there were more ruts and it was more fluid. I saw that Thomas crashed in that second moto so I hope he is OK and we can return to our battles at the next GP.”

Tom Vialle: “The first race was really good for me because I could just follow Jorge and keep the speed. I made a mistake with five minutes to go and that decided it. I didn’t have the same rhythm in the second race and in the end just controlled my position to make sure of the podium. I just had trouble to find the right lines, so to take fourth and second overall meant a good day.”

After the Asia stint of the calendar (and before the season-ending event in China in September) MXGP returns to Europe and the hillside Loket circuit will stage the Grand Prix of Czech Republic in two weeks time.