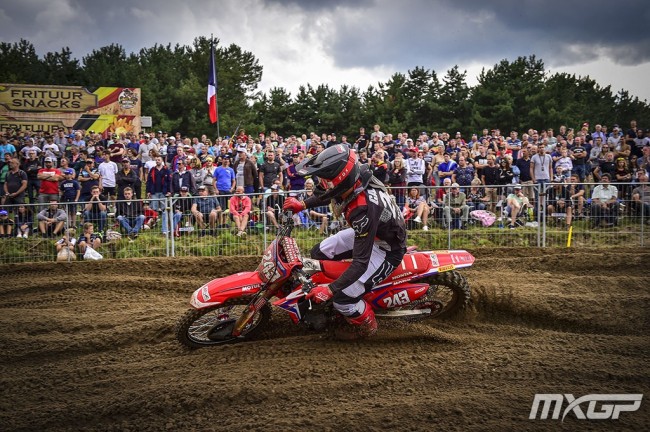 The championship leader followed a very impressive Romain Febvre home in race one but the Frenchman looked exhausted when he crossed the line, making you wonder how much he had left for moto two.

It all went wrong for pole-man Max Anstie who went down very hard entering turn one and was forced to DNF with a painful shoulder.

But he popped some pain pills and came out firing in race two! Anstie ran down Gajser, worked his way into a 13 second lead but then hit the deck again and gave the lead back!

Incredibly, Anstie remounted and launched another attack on Gajser to regain the lead with jut a couple of laps to go to take a superb moto win, but will no doubt leave with a frustration of what could have been.

Meanwhile Gajser was somewhat shocked at winning in the deep sand. “I didn’t expect that from Lommel,” he admitted. “To be here, it means something special, we have worked in the sand this winter a lot.”

Glenn Coldenhoff rode strong all day to take his first podium of the year in third as Febvre climbed through the field to fourth but was one position short of winning the overall.

Jorge Prado totally dominated both motos at Lommel using supreme technique to pull away from his rivals from lap one onwards.

Prado holeshot both motos and no-one could see him after a few turns, and, the only man who might have been able to challenge him, Jago Geerts, had a disastrous day interspersed with a stunning first moto ride.

Geerts amazingly went down in turn one, immediately ending his hopes of the home win with Prado up front, but the Belgian put his head down and powered through the field to be eighth within six minutes while matching Prado’s lap times. He continued to push and made it all the way to second in a ride that he or his Belgian fans won’t forget.

But the second moto was also tough. Geerts could only gate around tenth and by the time he got into second Prado was already over ten seconds ahead. From there, Geerts didn’t quite seem to have the energy to push and looked to be matching third- placed Vlaanderen’s pace with a five second gap, until suddenly with two laps to go, Geerts slowed down and pulled off the track with what looked to be a mechanical issue incredibly robbing the Belgian of second place overall, despite riding superbly from behind in both motos.

However, it gave his teammate Ben Watson, who was riding with blisters all day, a promotion to third overall and his first podium of the season, an impressive comeback from a hand injury on maybe the toughest track in the world.