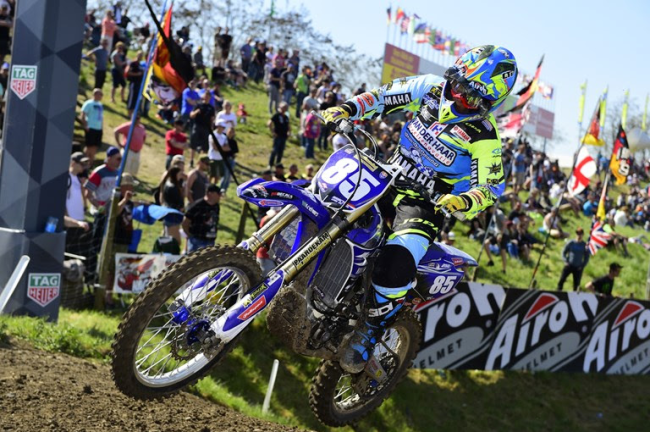 Nancy Van De Ven finished 3rd overall in round three of the WMX World Championship in Germany on Sunday, overcoming stiff winds and a deeply rutted track at Teutschenthal under sunny skies. Courtney Duncan withdrew from competition in the first moto after an unlucky crash midrace left the New Zealand rider unable to finish the course.

Van De Ven, who won WMX round two in Valkenswaard in March, finished second in the opening moto on Saturday afternoon, four seconds behind Livia Lancelot of France, and showed consistency and patience on her YZ250F over the tricky natural circuit. Despite careful maintenance and constant attention the racetrack developed multiple deep lines and slick hardpack sectors as hundreds of riders practiced, qualified and raced on a busy motocross weekend near Halle.

In the second moto on Sunday Van De Ven found herself in the lead early from a good start, but traded spots with Stephanie Laier of Germany twice midrace before settling into third behind eventual winner Lancelot.

Duncan was second fastest in timed practice on Saturday behind Kiara Fontanesi of Italy, and in the first WMX moto had successfully passed into first place after 11 minutes of racing when she clipped an accredited photographer with her handlebars after a jump and fell to the track. Duncan could not adjust her motorcycle and rode out into pitlane for assistance, eventually finishing 12th, nearly two minutes behind Lancelot.

Duncan withdrew from WMX of Germany on Sunday morning with injuries and will return to New Zealand for medical consultation and recovery, with the stated intention to return once she is fully fit.

With 125 points Van De Ven now sits 2nd overall in the WMX World Championship standings, 11 points from new red-plate leader Lancelot, while Duncan, who won both motos in Qatar and was also on the podium in Valkenswaard, slips to 3rd overall with 102 points ahead of scheduled WMX round four on June 5th in Saint Jean d’Angely, France.