Pocock and Barr on Canada Heights 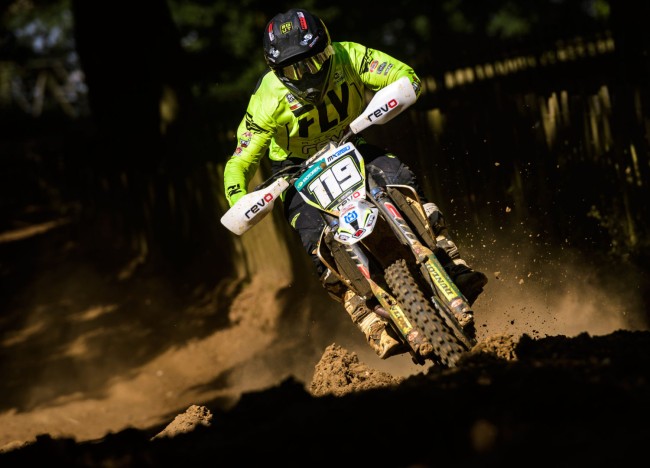 PR-REVO Husqvarna UK turned out in force for the penultimate round of the Michelin MX Nationals at Canada Heights in Kent where the full four-man team was in action.

Although the series isn’t a priority for the team’s three Pro MX2 riders who are focussed on the European 250 championship, they always race to win and Mel Pocock did exactly that with his team-mate Martin Barr joining him on the podium in third overall.

Mel posted the fastest lap time on his FC 250 in the opening race on his way to second and backed this up with victory in race two to take the overall. Martin was fifth in the opening moto after having to come through the pack and claimed a solid third second time out.

Dylan Woodcock, the team’s third Pro rider, produced a season-best performance to end the day in sixth overall with 10-6 moto scores.
Competing in the SW85cc class, Ollie Colmer took a perfect four wins from four starts – despite a fall at the beginning of the final moto – and now leads the championship with one round to go.

Mark Yates (Team Principal)
“It was an excellent weekend – especially considering it was a last-minute decision to do it – and we had some great results.

“I’m thrilled to bits with Mel’s riding – he moved up to another level this weekend which is a result of all the hard work done in the week in Holland and Belgium.

“Martin was a bit out of sorts but even though he wasn’t on top form he still managed to get on the podium and I’m really pleased for Dylan. He didn’t have the best first moto but between races we had a good chat and he came out for the second with all guns blazing and had a really good result which was a great confidence-booster for him.

“I’d like to say Ollie had a perfect weekend but he crashed in the fourth race and made it hard for himself. He then came from dead last to win it and to sweep all four motos and take the red series leader’s plate was an excellent performance.”

Mel Pocock – 1st (2-1)
“A second and a first gave me the overall win which was nice. It was a great day out and the bike was working well. The series isn’t our priority this season but it’s always good to get on top of the podium.”

Martin Barr – 3rd (5-3)
“Canada Heights was all right but obviously I’m wanting a lot more. I ended up third in qualifying in MX2 which gave me fifth gate pick and I made a decent start in the first moto but halfway around the opening lap I came together with another rider and lost a few positions and after that it was a tough race. I never really got into it to be honest and was disappointed to finish fifth.

“In race two I got another okay start and just battled on and got third which was good enough to give me third overall. It was frustrating day and I wanted more but with Mel on the box as well it was a solid day for the team.”

Dylan Woodcock – 6th (10-6)
“It was good day for me. In the first race I started on the outside, got a bit bunched up and had a tussle with a few other riders. It was hard to pass 450s around that track with all the hills but in the second race I got a really good start and finished sixth in MX2 which was really good. I enjoyed it and it was my best result of the season. It can only get better from here.”

Ollie Colmer – 1st (1-1-1-1)
“It was an absolutely fantastic weekend and the MX Nationals did a brilliant job with the track. One of my main dreams was to ride Canada Heights and I got four out of four wins. In the last race I crashed in the first corner and was 10 seconds down but came through the pack and made the pass for the win on the last lap.”