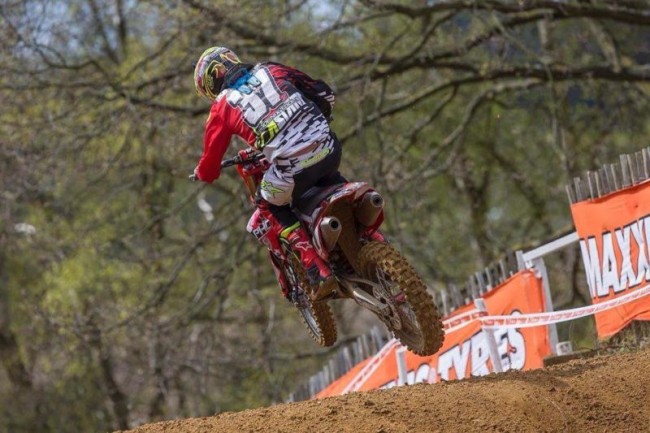 Phoenix Tools Honda have got their entry confirmed for the British GP taking place at Matterley Basin on the 18th and 19th June.

Gert Krestinov will race his second MXGP World Championship race of the season after competing at Valkenswaard earlier in the year. Gert rode well there and finished twenty-first and thirteenth in the moto’s for sixteenth overall. He will be hoping for points in both the moto’s at the British GP.

Unfortunately, due to the under twenty-three age rule in the MX2 World Championship, Gert’s team mate, Carlton Husband won’t be able to compete in the World Championship. However, he will race the EMX250 championship that is taking place that weekend along with the premier classes. Hopefully Carlton can put in a few good results and give the home fans something to cheer about in the EMX250 class.

The team are hoping to compete at more races at the highest level depending on the budget made available to them. Hopefully this won’t be the last time they make it to the MXGP paddock in 2016.

I’m very happy for the opportunity that my team Phoenix Tools Honda gave me and I will give my best to get the results Im aiming for.

I’m really excited to ride at the British GP, it’s something I have wanted to do for a long time and I just never had the opportunity to do it before now.

For my team to be able to compete at world level is something five years ago I thought would never have happened, I’m so excited for the British GP and I have two fantastic riders in Gert Krestinov and Carlton Husband who I believe might just surprise a few people. It’s only with the continued support of my generous sponsors that we can go racing at a high level and I thank them all for there ongoing help, also the teams two mechanics Karl and Chris who put so much time and passion into the team.