Paulin on an emotional podium and race win at Lommel 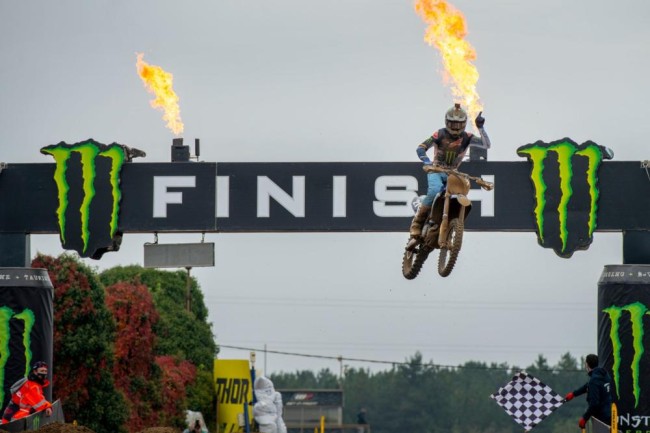 Gautier Paulin had a great day at round thirteen of the MXGP World Championship at the brutal Lommel circuit. A track you wouldn’t put as one of the Frenchman favourites but he went 1-5 to end up second overall. He’s give his team, the Factory Yamaha setup something to think about for the 2021 season – riding like that they might be reluctant to let him go.

Paulin discussed his podium during the press conference and revealed back in May he broke his back.

On winning the first moto which is his first race win since Valkenswaard 2017 and backing that up with a fifth which saw him get on the podium..

I am emotional, I am really happy to be back on the podium for myself, for my team. It’s been tough and a long time since I’ve had a win. In the first moto I was pushing really hard and had a good rhythm. I didn’t really talk about it but I broke my back and knocked myself hard at the end of May so to be back to this level I am really happy.

From being in hospital I didn’t talk about it but I broke two vertebrae and it was really bad. Then again at Faenza I had a crash but right now I am 100% again. I am really happy.

On his future and if there’s a chance he can stay with Yamaha..

No there is nothing about my future. From my side it has been really tough to be on my level. It’s been an anxious year with the virus and stuff so I’ve just been focusing on myself and getting back to my level. I am looking forward to running up front more which is where I deserve to be.

At Mantova I was 100% again and that was a great feeling. It’s a tough period were everything changes like with the virus, you need to focus on the future. Right now I am focusing on the racing which is happening really fast and then after I will sort out my future. The goal was first of all to be 100% and then enjoy. When I was racing at Faenza around tenth I was feeling sad and frustrated. It was tough not being 100%.