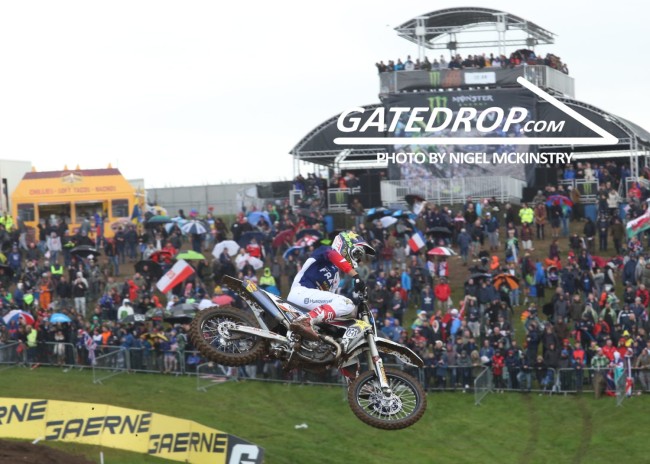 Team France won their fourth Motocross of Nations in a row at the weekend and not even injuries or poor weather appears to be able to stop their winning streak!

Despite having Marvin Musquin, Benoit Paturel and Dylan Ferrandis unavailable, the French team rose to the occasion as Christophe Charlier a former MX2 moto winner now riding enduro, produced a magnificent performance in MX2 that meant Charlier won the ISDE and the MXoN in the same year!

Charlier, a surprise pick for MX2, took a brilliant sixth in race two (second MX2 rider) after a solid 14th in race one to shut the doubters up while Gautier Paulin and Romain Febvre were solid as expected, Febvre even having time to stop for goggles in the final moto and finishing third.

After what looked like a wide open Des Nations going in, the French ended up dominating winning by 11 points with five of their six motos in the top six (2,3,3,6,6).

See what the jubilant trio had to say about their amazing achievement below:

Paulin: It’s just perfect, it’s crazy. It’s not more pressure, I look at the team result not my individual result. When you don’t have a good team you can think individually but the French Federation are giving us the power to succeed. When we come here we really think differently and together, I am so happy when I saw Christophe riding like that in MX2 because he had a tough preparation riding the ISDE, he had been on the bike a lot and was tired. Racing the 250 was a big challenge, the synergy this year was crazy, probably the best we have ever had. This one feels good.

Charlier: It’s crazy, I stopped the motocross for one year and to do a good race like that it’s so good. The team make a good job and the staff also, so I am really happy to finish like that. I’m over the moon with this victory. Especially for me focusing all my efforts this season into the EnduroGP World Championship, it’s been a crazy experience coming back to the pinnacle of motocross competition. The Nations is always a huge event and this season it seemed that it was even more spectacular. As for me, I spent the last couple of weeks training on the FC 250 machine and it all worked out pretty well here in the UK. I got 14th in the first moto and then managed to improve to sixth in moto two. It’s been a crazy journey and it feels amazing to have now won the ISDE and the Nations during the same season.”

Febvre: I had two solid motos and two good starts. The new bike feels amazing, we have been working since a few weeks on it and we changed a few things from yesterday to make it even better. First moto I was battling with Jeffrey and when he crashed I took of my goggles because I could not see so good. But with the lapped riders and the rain I could not see anything so finished second. In the second moto I felt I couldn’t go to the end (with vision problems) so I stopped to change my goggles. I had no doubt about Christope and I am so happy for him he won the ISDE and the Nations so I think it is an amazing year for him.