Paturel on his first GP victory! 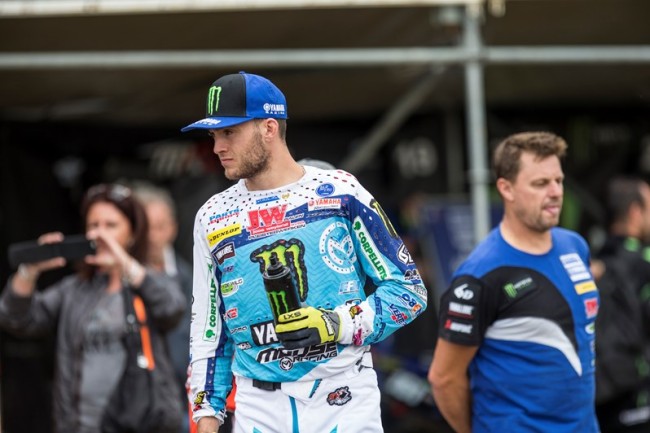 Fifteen rounds in and the moment has finally arrived. In hair-raising fashion, Kemea Yamaha Official MX2’s Benoit Paturel landed his YZ250F on the top step of the podium – for the first time in his career – here in Frauenfeld-Gachnang, at the MXGP of Switzerland. He has also moved up into third place in the MX2 championship standings.

If anyone knows how to make the most of a poor start, it’s Benoit Paturel. The super talented Frenchman was buried outside of the top-twenty heading into turn-one, but somehow, he managed to pass at least fifteen of the world’s fastest MX2 riders in the space of 200 meters by tucking up the inside of turn-one and holding his YZ250F pinned into, and around the outside of turn-two to emerge on the cusp of the top-ten.

There are not many riders hungrier than Paturel in MX2 right now, if any at all. The Frenchman was unstoppable as he made light work of his competition to complete the first lap, of sixteen, in sixth place. Less than one lap later, Paturel nipped around the outside of Julien Lieber for fourth where his next target was the home soil hero, and yesterday’s Qualifying Race winner Jeremy Seewer. Despite being the fastest rider on track for the most part of the race, the Frenchman had his work cut-out for him.

One of the benefits – or arguably the only benefit – of coming from the back of the pack, is that a rider is forced into being creative and finding new lines. The majority of racers will ride on one line, so to make passes, a rider is forced to ride off of the beaten path. This worked in Paturel’s favour as he quickly found out that launching the jumps was shaving seconds off of his lap time.

With five minutes to go, Paturel had passed the championship leader, Pauls Jonass, and Jorge Prado, and was going after the fan favourite, Seewer. The fans clapped and cheered for the battle that was occurring in front of them, as Seewer and Paturel went bar-to-bar in one of the best and most intense battles of the season. Only a small mistake by Paturel when he caught an edge on one of the many acceleration bumps made the difference with Paturel losing out to the Swiss rider by less than 1-second.

Goose-bumps from race one had barely faded when the gates dropped for Race 2. The fans had not forgotten what they had witnessed and they all leapt to their feet before putting their hands on their heads in disbelief as the race one winner, Seewer, went down at turn one. Paturel wasn’t well placed, but once again he used his incredible eye for new lines to work his way through the pack and up into the top-ten before the end of the opening lap.

On lap three, Paturel set the pace as he charged his YZ250F around Stephen Rubini and Julien Lieber for third. Jorge Prado fell from first place which handed Paturel second place as he worked on the American, Thomas Convington, for the lead.

After setting the fastest lap of the race with 15-minutes to go, Paturel eventually made a pass stick on Covington when he charged up the inside and got perfect drive around a 90 degree turn.  From there, he bought it home for his second race win of the season and first-ever Grand Prix victory. He also moved up into third place in the MX2 championship standings.

Wet dirt always dries up technical and gnarly which is what happened over the course of the day at the MXGP of Switzerland. The new-ish, purpose built track here in Frauenfeld-Gachnang went from soft and spongy to rock hard and edgy in no time at all, and it demanded a careful eye.

Alvin proved his technical ability with his solid rides for a pair of thirteenth’s and eleventh overall, while Brent Van doninck progressed as the day went on and managed to better his fifteenth place in Race 1 by one place, with a fourteenth in Race 2 and fifteenth overall.

The next round of the FIM MX2 World Championship will take place next weekend, August 19th and 20th in Uddevalla, Sweden.

“It was an incredible day for me. I won my first GP. I will never forget this day. I have had a bad time over the last couple of months but I have shown today that I can still win and it’s good for me, and good for the team. I am so happy for today, and I plan on continuing like this. There are still four GP’s remaining, and I hope to do the same results like this.”

“Bad weekend for me, my riding has not been going so well over the last few weeks. I had a good start in the first race and then a few corners later somebody crashed in front of me and I ended up crashing as well. I started dead last and then came back to fourteenth or fifteenth. It was really hard to pass on this track and then again, I was caught up in a crash, but I didn’t crash, I just got caught. I felt like I was riding better in the second race, but seem to be struggling a bit. I hope I find my rhythm again soon.”