Osborne and Wilson talk about their podiums at Millville 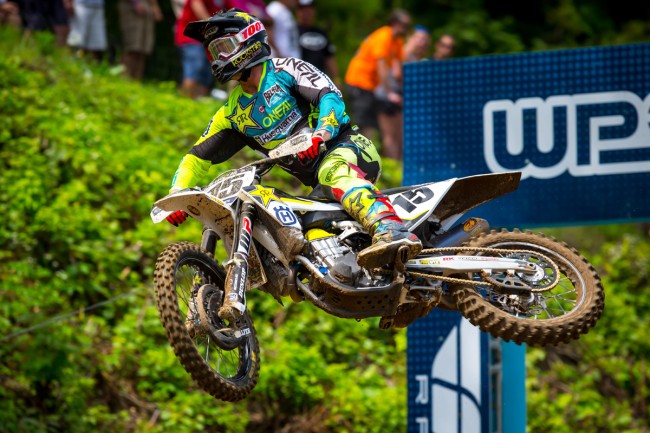 Rockstar Energy Husqvarna Factory Racing’s Dean Wilson and Zach Osborne put in heroic rides at the eighth round of the AMA Pro Motocross Championship on a hot and humid day at Spring Creek MX Park in Millville, MN. Dean Wilson used great starts to pilot his Husqvarna FC 450 to a career best 3-3 moto score for 2nd overall on the day. Zach Osborne overcame a tough 8th place finish in moto 1 and rebounded with an inspired come from behind ride to win moto 2 and land himself on the overall podium in 3rd.

Dean Wilson got a great start in the first 450 moto and quickly held down second. Still in second at the halfway mark, he was looking strong as he battled with Eli Tomac for position. He held his ground and made great line selections as swapped positions with Tomac multiple times before settling in the third place spot. He was riding steady in third before putting on an epic battle with Justin Barcia in fourth. Barcia made the pass, but Dean came back with a vengeance and rode hard. He passed Barcia back for third and held strong to the finish. He pulled an impressive second-place start in the second moto and battled for position before moving back to fourth in the first lap. He made a successful pass for third in the third lap and stayed steady to finish third. The 3-3 finish gave him second overall on the day, and he is currently fourth overall in 450 rider point standings.

“It was amazing today,” said Wilson. “It was a hot, rough, gnarly track and I knew fitness and riding was going to play a big part. I’m so happy to be up here, and I didn’t even know I was second overall until I came over the finish line so that was a great feeling. I’m really happy, and I’m really excited, but we have a lot of races to go.”

Zach Osborne was mid-pack at the start of the first moto and navigated into 10th by the end of the first lap. He made quick work of moving through the field, made the pass for seventh by the third lap, and continued to hustle. He was on the move and got into fifth by lap six before a minor mechanical incident forced him to nurse the bike the remainder of the moto, but didn’t stop him from finishing in 8th and salvaging 13 valuable championship points. He was top-10 at the start of the second moto and sixth by the end of the first lap and was on the move. He was on a mission and moved into third by the halfway mark before setting his sights on the top-two. He carried some momentum and went around the outside of Shane McElrath in lap eight to take over the second-place spot before posting a lap three seconds faster than the leader. Creeping closer to Savatgy in the lead, he stalked him into lapped traffic and wouldn’t be denied. He made an impressive inside pass to overtake the lead with five minutes to go. He held strong to the finish to claim the victory and earn third overall on the day and maintain his points lead in the 250 championship.

“Overall we had a good day,” said Osborne. “I felt really good right of the bat in practice and qualified second. I had a little issue in the first moto but I redeemed myself in the second moto and came away with a moto win and a podium. It’s nice to not lose a lot of points and still have a good lead. For a bad day, I only lost four points. So that’s pretty good and I’m pretty happy with it. My second moto was really good, and I feel good moving forward.”

Martin Davalos was mid-pack at the start of the first 450 moto and navigated into 12th by the end of the first lap. He moved back to 15th by the halfway mark but continued to ride hard. He moved back through the pack to finish 11th. He was top-10 at the start of the second moto and was sixth in the first lap. He rode hard to make it up to fourth by the halfway mark and held strong to the finish. The 11-4 finish gave him seventh overall on the day. He is currently 10th overall in 450 rider point standings.

“The track actually came around from this morning,” said Davalos. “It rained a lot, and the guys did a great job getting the track ready for us — but it was brutal. It got really humid, especially in the second moto. The track was really rough and rutted. I made a little bit of a mistake in the first moto and stalled my bike. I got a top-10 start in the second moto and put in a charge for fourth. I feel pretty happy with how I’m ready, but hopefully I still get better for Washougal next weekend.”

Jason Anderson was in the back of the pack at the start of the first 450 moto and was 37th by the end of the first lap. Dealing with a hand injury sustained earlier in the week, he was unable to finish the race and pulled off the track after a few laps. He was unable to start the second moto due to injury.

The team will now make its way to the ninth round of the series, being held next Saturday at the Washougal National in Washougal, Wash.