Olsen on another GP win: I feel like my old self 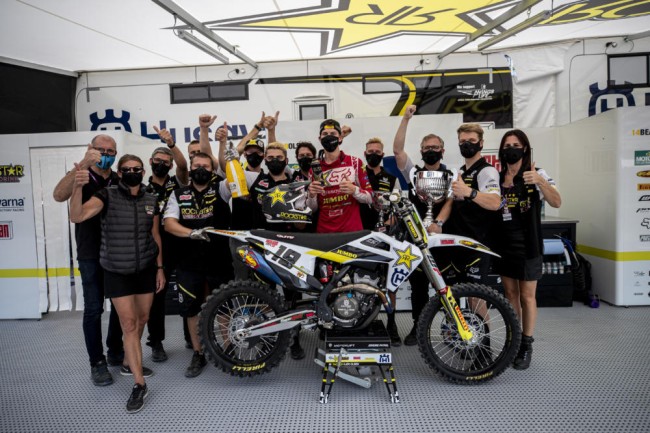 Rockstar Energy Husqvarna Factory Racing’s Thomas Kjer Olsen has claimed impressive back-to-back MX2 Grand Prix wins following overall victory at the MXGP of Città di Mantova. Continuing his succession of strong results, TKO took the win in the opening MX2 moto at round 10 of the FIM Motocross World Championship, before a runner-up finish in race two confirmed his second trip to the top step of the podium in as many GPs. Thomas’ MX2 teammate Jed Beaton couldn’t quite replicate his race-winning speed from round nine, racing to a consistent 6-6 result for sixth overall.

Fresh from his overall MX2 victory at round nine of the 2020 series, Thomas Kjer Olsen has secured a second consecutive overall MX2 class win, this time at the MXGP of Città di Mantova. Charging to his first moto win of 2020 in the opening race of the day, Kjer Olsen was clearly comfortable around the sandy Mantova circuit. A solid start resulted in the Dane charging forwards and moving into third place before a dramatic end to the race saw him firstly make the pass for second with three laps to go, before going on to make an all-important pass for the lead on the final lap, taking a well-deserved victory.

The second moto saw a race-long charge from TKO after he completed the opening lap in eighth place. Knowing that another overall GP win was a strong possibility, every pass made gained him vital points and following another impressive ride he finished in the runner-up position. In doing so, Thomas claimed his second consecutive overall MX2 class victory aboard his FC 250 as he further closed the gap to the top five in the MX2 World Championship.

Jed Beaton delivered another strong result in Mantova. Lining up with his confidence high following his maiden MX2 race win last weekend, a sixth-place finish in the opening moto set the Australian up for solid overall finish.

After drifting through the first turn of moto two side-by-side with his teammate TKO, Jed quickly made a number of passes during the opening laps and slotted into second place. As the race neared its conclusion, a couple of mistakes saw the Australian slip back to sixth at the finish. Rewarded with sixth overall, Jed remains fourth in the MX2 World Championship with third place well within reach.

In the EMX250 class, a challenging pair of motos for Kay de Wolf saw the youngster claim ninth overall. More importantly, the recently turned 16-year-old maintains his third-place ranking in the championship and looks for improved results in three days’ time, at round seven of the EMX250 series.

Rockstar Energy Husqvarna Factory Racing return to Mantova for the third and final time on October 4, round 11 of the FIM Motocross World Championship, the MXGP of Europe.

Thomas Kjer Olsen: “It’s amazing. I just feel like my old self now, which is a great feeling. I’m able to attack the track and my bike is so good so I just feel awesome now. The first moto took a little bit out of me, but I dug deep in that second moto. Last weekend helped me with my confidence massively and I believe in myself again. It’s unfortunate that we had a tough start to the year but it’s great to be back on the podium and winning again.”

Jed Beaton: “For sure it wasn’t the day I wanted after winning the second moto last weekend, but I’ll take 6-6 on a bad day. I crashed in both motos which wasn’t really ideal and made a few mistakes in the second race. No complaints, my bike’s great, it just wasn’t my day today, so we’ll look forward to Sunday and hope to get back on the box.”