Olsen on a hard-fought podium in France – I just gave it all I had! 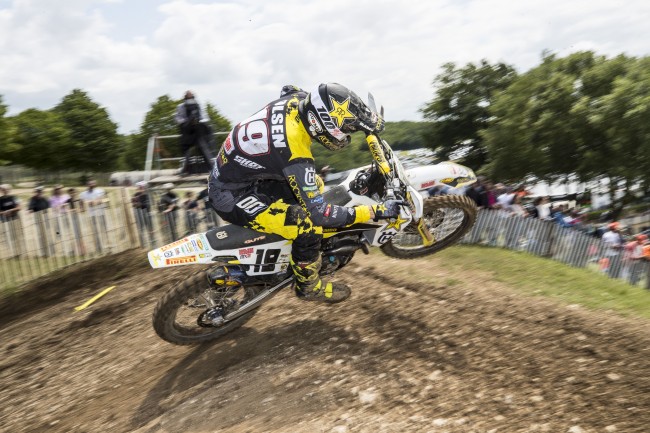 Once again securing a place on the overall MX2 class podium, Rockstar Energy Husqvarna Factory Racing’s Thomas Kjer Olsen has finished third overall at round seven of the 2019 FIM Motocross World Championship, the MXGP of France.

Despite making things harder for himself than they should have been following a poor start in the second moto, TKO again delivered an impressive set of results to land his sixth podium finish from seven GPs. A relatively straightforward opening moto saw the Dane initially place fifth before moving to third on lap seven and going on to hold the position through to the end of the moto.

Race two was to prove more challenging for TKO. With his start gate falling a little unpredictably, he found himself down in around 13th position. Making his way forward and into eighth by the end of the opening lap, a fall quickly undid much of the good work he’d done as he dropped to 12th. Making no further mistakes and charging hard he improved from ninth to sixth before taking over fifth on lap 14 and holding the position to the end of the race. With third overall TKO maintains his runner-up position in the MX2 class championship standings.

After placing 20th in the MX2 class timed practice Jed Beaton took no further part in the MXGP of France.

Rounding the first turn further back than he’d hoped in the opening MXGP class moto, Jasikonis quickly got to work around the hilly French circuit to complete the first full lap in 12th position. Focused on picking off riders ahead of him, the tall Lithuanian worked his way inside the top 10 by lap seven before improving to eighth on lap 12. Once again showing strong pace during the closing stages of the moto he moved into his final finishing position of seventh two laps before the finish of the race.

The second moto proved to the toughest of the day for Jasikonis. Caught up over the start gate he rounded the first lap down in 21st position. Making several passes in quick succession during the early stage of the race, by lap 12 he was in 10th. Moving into ninth with just three laps to go, he slipped off on a cambered left-hand turn before eventually finishing 11th.

Pauls Jonass’ hopes of continuing his recent run of good form were ended in France as the former MX2 World Champion failed to finish the opening MXGP moto before hitting the start gate in the second race. Buried at the rear of the pack, he completed the first lap in 27th before working his way into 20th at the finish.

In the FIM Europe EMX125 European Motocross Championship, Kay de Wolf placed sixth overall on his TC 125. Placing 14th in the opening moto he then finished a strong third in the second moto and currently holds third in the series standings with three rounds remaining.

The Rockstar Energy Husqvarna Factory Racing team will next be in action at round eight of the FIM Motocross World Championship, the MXGP of Russia, on June 9.

Thomas Kjer Olsen:“Apart from the fact that I made things difficult for myself in the second moto it’s been a pretty good GP for me. I’m pleased with how I worked my way forward to get on the podium with my second moto result. The track was good – they ripped it less than previous years, so it was pretty consistent everywhere, just with some tricky ruts. I got a decent start in the first moto and rode a strong race. Third was where my pace was – I wasn’t going to catch the two riders ahead, so third was good. I was pleased with that. I guess the gate bobbled a little in the second moto and I got a horrible start, down in 12th or 13th. I pushed hard after that. I wanted to finish on the podium so I just gave it all I had. I’ll keep working now that we have a weekend without a GP. Russia’s a fun track so I’m looking forward to racing there.”

Pauls Jonass:“A GP to forget for me, which is a shame after two very positive GPs before this. Not getting a good start in the first moto made things difficult during the first part of the race, but I made some good passes and was working as hard as I could to get inside the top-10. With only a few laps to go before the finish I thought that there was something not right with my front wheel, so I stopped. It turned out that everything was fine, but that was the end of my race. Like some other riders, I hit the gate in the second moto. I’m not sure what happened but as several riders did the same I think something wasn’t quite as it should have been. After that I had a lot of work to do. Certainly not the results or championship points I was looking for. But I’ll learn from what happened and move onto the next race.”

Arminas Jasikonis: “Seventh and 11th isn’t what I’d hoped for here in France, but I showed some good speed. I was lacking a little at the start in the first moto but I felt like I was always able to catch riders and keep moving forwards. The start of the second moto was strange. The gate seemed to bounce, I hit it but got over it but my start device unlocked. I got a bad start and just pushed as hard as I could to make passes in the early laps. Some passes worked, others didn’t, but generally I got through the opening laps in pretty good shape and was working my way forward with some good lap times. I had a small slip-off with a few laps to go, which was frustrating. Not the results that I wanted but my speed was good so there’re positives I can take away from this GP.”