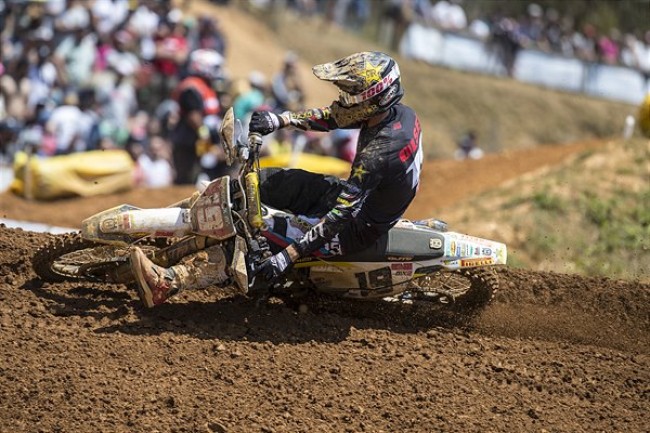 In stark contrast to the wet and muddy MXGP of Lombardia one week ago in Italy, the MXGP of Portugal saw a return to near-perfect track conditions and a fast and flowing Agueda circuit. For Kjer Olsen the sixth stop of the FIM Motocross World Championship was a bittersweet event as despite a well-deserved overall runner-up MX2 class result, the tall FC 250 rider was forced to relinquish the championship leader’s red plate, dropping to second in the MX2 series standings by just three points.

Showing impressive speed once again, TKO started the GP of Portugal with a strong second-place finish in the opening 18-lap moto. Fifth from the start he worked his way up into third by lap three. With the pace at the front of the race high throughout the moto, in the closing minutes he made a pass into second to secure a hard-fought runner-up result. Race two saw Kjer Olsen come close to running into serious trouble in the first corner as he veered right as others were turning left. Thankfully remaining upright, he ended the opening full lap in 10th before charging hard to work his way to fifth on lap six, where he stayed until lap 15. Making a final pass with two laps to go he finished fourth and with it second overall.

Kjer Olsen’s team-mate Jed Beaton endured a tough MXGP of Portugal. Going down in the second turn of the opening moto following a good start he battled his way from 32nd at the end of lap one to an eventual finishing position of 12th. After a fall damaged his bike in the second moto he was forced to retire.

From the end of the opening lap in moto one Jonass held seventh, a position he maintained until the 18th and final lap. The second moto was a similar affair for the former MX2 World Champion. Battling to eighth come the end of the opening lap, he held that position until the last lap of the race. Moving to his eventual finishing position of seventh, he matched his first moto result and claimed sixth overall.

Arminas Jasikonis found himself down in 16th at the end of the opening MXGP race before he started to work his way forward with passes on many of the first 10 laps of the race. Working his way through to 11th on lap 12, he went on to finish 11th. Jasikonis again placed 11th in the second MXGP moto.

The Rockstar Energy Husqvarna Factory Racing team will next be in action at round seven of the FIM Motocross World Championship, the MXGP of France, on May 26.

Pauls Jonass:“I’ve really enjoyed the GP of Portugal. It’s a track I’ve always liked and the conditions were pretty much perfect here. I guess I was feeling good after my podium result in Italy last weekend, but it also feels good to get a strong result in more normal conditions. My physical fitness is improving all the time and as it does I’m able to enjoy racing a 450 more and more. I didn’t get the best of starts here, but I made some important passes in the first laps of both races, which really helped me. The track was fast and a lot of riders were really pushing hard, so it wasn’t easy to make passes. I rode consistently during both motos, which was also important. I feel like I’m making some good progress, which gives me extra motivation to keep working hard with the team.”

Arminas Jasikonis:“This hasn’t been the GP myself or the team hoped for. But I’m leaving Portugal physically ok, just with two frustrating results. After my crash in the qualification race I knew today would be tough. Not getting the best of starts on a fast and generally one-lined track didn’t make things any easier for me, but that’s racing. I gave my all, made some good passes, but just wasn’t where I hoped I’d be. But like I said, I’m in one-piece and we’ll get back to work in France next weekend.”

Thomas Kjer Olsen:“Generally, I’m very pleased with how I’ve ridden here in Portugal. Losing the red plate isn’t great, I never wanted that, but again my speed has been good and to get second overall after a tough second moto is great. I felt good all weekend, and I’d been looking forward to the GP. Things are heading in a good direction so plenty of positives from the both races in Portugal. I got a good start in the opening race and worked my way from fifth to third. The pace was really strong and we were all pushing really hard and using a lot of energy. Second in that first race was really good. I was pretty lucky in the second race that I didn’t go down entering the first corner – I ended up going right when the corner went left. I had a lot of work to do after that and just rode as hard as I could. Working my way back to fourth was good. Carrying the red plate into more GPs would have been nice, but nothing changes now that I don’t have it. I want it back. I want to be winning races. I just need to keep focused and work on consistent starts.”

Jed Beaton:“It’s been a tough GP for me. I’m pretty beaten up and, yeah, things just didn’t go well despite two good starts. I went down in the second turn in the first moto so I just pushed as hard as I could. I stalled my bike at the end of the wave sections after passing about 10 riders, so I went back to last again. I gave everything to get to 12th, which I think was a good result considering what happened. I was about sixth off the start in the second heat but clashed with another rider over one of the jumps. I got landed on, my bike got landed on and it was pretty messed up and bent. There was no point in continuing so unfortunately I had to retire.”