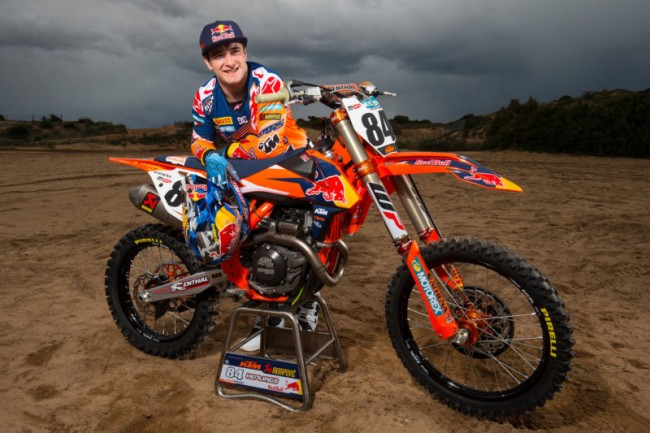 ** Update: MX Sports have sent out the following update stating they sent the press release below out in error…

As we suggested on Monday (see here) Jeffrey Herlings has now been officially confirmed to race the last US National of the year this Saturday!

Herlings has wanted to race a US National for a few years and finally the stars have aligned to make it possible with the US GP happening one week later and Herlings not likely to claw back the 101 points deficit on teammate Toni Cairoli for the MXGP title.

Herlings rose to prominence as the most successful MX2 rider in the history of the World Motocross Championship, capturing three titles and amassing an unparalleled 61 grand prix victories. The Netherlands native, nicknamed the “Flying Dutchman,” made the move into the premier MXGP division for 2017, and after a slow start to the season he has become a consistent threat for victories, capturing a trio of overall wins as a rookie, including victories at two of the last three GP’s. That recent string of success has helped Herlings climb all the way into second in the MXGP championship standings, currently 101 points behind his legendary teammate Antonio Cairoli with three rounds remaining.

The next round of MXGP will bring Europe’s premier racers stateside for the annual MXGP of the USA, which will make its inaugural visit to WW Motocross Park in Jacksonville, Florida, over Labor Day weekend, September 2-3. As a result, this weekend’s Ironman National in Crawfordsville, Indiana, provides a fitting opportunity for Herlings to keep his competitive intensity on a high level during the off weekend, ready to test his mettle against the likes of Musquin, Monster Energy Kawasaki’s Eli Tomac, and RMATV/MC-WPS-KTM’s Blake Baggett – each of whom have earned multiple 450 Class victories in 2017.

“We are thrilled that a multi-time FIM World Motocross Champion like Jeffrey Herlings would take the opportunity of an open weekend in MXGP to come over and compete in the Lucas Oil Pro Motocross Championship,” said Davey Coombs, President of MX Sports Pro Racing. “For him to take on a challenge like this really shows his competitiveness as a racer. We can’t wait to see him go up against Eli Tomac, Marvin Musquin and the rest of our championship contenders, then see Eli join Jeffrey’s series next weekend with the MXGP of the USA. Both of these races will be very exciting to watch.”

With Herlings’ addition to the Ironman National lineup, the 450 Class will feature a total of six 250cc titleholders from around the world, which also includes Baggett, Musquin, Tomac, Cooper Webb, and Dean Wilson.

The Christi Hubler Chevrolet Ironman National commences this Saturday, August 26, with practice and qualifying rounds beginning at 8:30 a.m. ET. Motos for both the 450 Class and 250 Class kick off at 1 p.m. ET. Broadcast coverage from Ironman Raceway begins on MAVTV with live coverage of the opening motos at 1 p.m. ET, followed by tape-delayed coverage of the final motos on NBC Sports Network at 5 p.m. ET. Additionally, all the action from Ironman, including final practice, can be seen as it unfolds on NBC Sports Gold, with live, commercial-free coverage (subscription required).