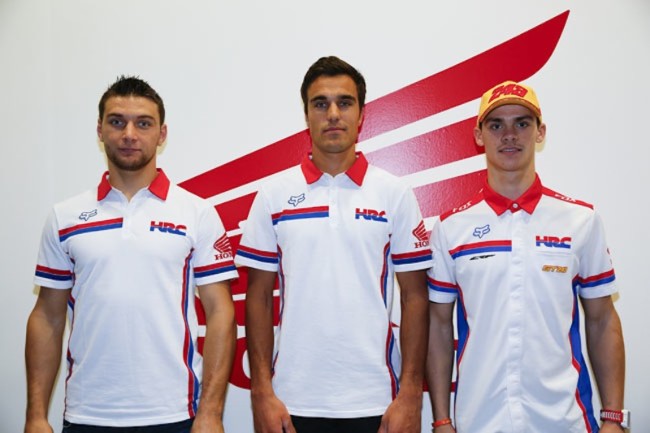 Reigning MX2 World Champion Tim Gajser will progress to the MXGP class of the FIM Motocross World Championship for the 2016 season.

The 19-year-old Slovenian will remain with the Honda Gariboldi Racing team, with whom he won his and the team’s first MX2 crown in 2015, but will climb aboard a factory Honda CRF450RW next season.

The news came at the EICMA show in Milan, Italy, today as part of Honda’s factory motorsport announcement featuring its MXGP, MotoGP, Trial and Dakar/Rally teams.

Gajser is very much at home on the CRF450RW as he has long favoured the bigger capacity machine for his training programme. For the last two years he has competed in the Motocross of Nations in the Open class on the CRF450RW, and has already been testing his bike for next year.

With a long-term contract with Honda Racing Corporation until at least 2020, Gajser has gone from rising star in 2014 to the brightest prospect in the World Championship. Cementing a remarkable World Championship crown this year in spectacular fashion at the last round, at just 19 years of age he is swiftly making the jump to the senior category with the full backing of the team, Honda and Honda Racing Corporation.

“I’m so excited to move up to MXGP next season. This year was a dream – it was everything we’ve ever wanted to achieve and I’m so happy to have made that mark in history for myself, Slovenia, the team and for Honda. It feels amazing. It was the plan already – when we are MX2 champion, we go forward to the next class – but we didn’t expect to win the title this year, so I’m a little surprised.

“Big thanks to Honda and HRC for their faith in me, and for providing me with such great support in MX2 this year, and for giving me a full factory bike and support in MXGP next year. I’m really looking forward to stepping up and riding the CRF450RW. I really like the bike, and actually I like the 450 even more than the 250. I’m tall, so the 450 is more powerful and easier to ride for my size.

“I always train with the Honda 450 at home, and this season was just riding the 250 at the races, so actually it was a little tricky changing bikes like that. Now I have a full factory 450, but apart from more power it’s not a new bike for me. I’ve already started testing the 450 for next season and I really love it.

“It’s a new beginning, a new class, and something new for us all, so for the first season there is no pressure and I will just try to do the best possible. I want to just take some experience from this first year – the other riders around me are more experienced in MXGP, so I will just try to learn as much from the year as possible. In my rookie season I will try for some podiums, but without putting myself under any pressure.

“To be here at EICMA alongside people like Gautier, Bobby, the MotoGP riders and all of HRC’s factory riders is an amazing feeling – I can’t tell you how proud I feel to be a part of this family and how motivated I am to keep things going in this good direction next year.”

“We always knew that we had got a star in Tim, and this year he proved that with his, and our, first MX2 title. The fact that he is even stronger on the CRF450RW makes me very excited for next season. He’s a big kid, and the bigger bike fits him so well. He trains a lot on the bike and is very familiar to it, and rides it very well. For us, it’s also a great honour to be able to step up to the MXGP class in 2016. When we started out in this journey with Honda, we always hoped for big things, and now everything we dreamed of is coming true, so I really want to thank Honda and HRC for their commitment to and belief in us.”

“I think we’re all very excited to see what Tim can do on the CRF450RW next year. We know he rides one very well and spends a lot of time training on the bike he has at home, and whilst it will be a big step I believe he will be very strong. Having said that, next year there will be no pressure on him – it will be a transition year for him to learn and gain experience. The Honda Gariboldi Racing team is the perfect environment for Tim and the Gajser family, as we saw this year with his MX2 title, so he will remain under their awning with full support from HRC. They’ve done a fantastic job this year, so we feel that the time is right for this graduation.