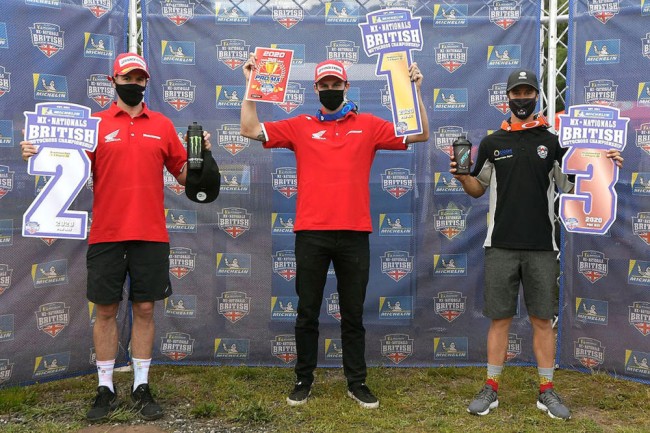 The 2020 racing season finally got under way at Hawkstone Park on Sunday where Jake Nicholls, Tommy Searle and Steven Clarke ensured Buildbase Honda packed the podium with Jake and Tommy filling the top two spots in Pro MX1 and Steven bringing it home in second in Pro MX2.

With the season badly disrupted by the Covid-19 pandemic, organisers of the MX Nationals series took the brave step of kicking off the championship at the iconic Shropshire venue and their courage was rewarded with two bar-to-bar 25-minute plus two lap Pro races.

Racing a pair of CRF450Rs, Jake drew first blood when he topped Pro MX1 Qualification by almost a second with Tommy slotting into third. Jake then holeshot the opening race and dominated to win by over five-and-a-half seconds, despite suffering from arm-pump from the mid-point of the moto.

Tommy, who was making his debut for the team and for Honda, also suffered with arm-pump but he toughed it out and was rewarded with third at the line after making a late pass.

Tommy started race two at the sharp end and by mid-race was holding second. After losing a couple of places he fought back and came out on top of a four-man fight to take second in the moto and second on the day as Jake recovered from a slower start to clinch the overall by one point from his team-mate with a dramatic last-lap pass for fourth.

“It’s been a weird start to the season – I was really nervous and I’m never like that – but I’m always happy to get the win,” said Jake. “I felt good in practice and then put in a decent lap in qualification which helped calm the nerves a bit.

“I holeshot the first race and just ran away really. After about 15 minutes I got savage arm-pump and started to ride a bit tight but to be honest I think everyone did. In the second moto I didn’t get a great start but I came through to fourth which was hard work.”

Tommy was satisfied with the second step of the podium in very testing conditions.

“I’m happy with that,” said Tommy. “It was obviously a bit of a struggle in the first race when I pumped up but everyone was in the same boat and it was good to get a race under my belt on the Honda. The track was very rough and I’m happy to get that out of the way to be honest.”

Also making his debut for the team, Steven came out swinging with a strong second in Pro MX2 Qualification. With the MX Nationals running a mixed-capacity ‘Fastest 40’ format with the classes scored separately, Steven was at a disadvantage up the long, uphill Hawkstone start straight on his CRF250R against the 450cc machines.

The experienced Midlander is, however, well known for his never-say-die approach to racing and despite pitting for fresh goggles in the opening moto he crossed the line fourth in class and then backed this up with a storming second in race two to secure second overall.

“I’m buzzing,” said Steven. “It wasn’t an easy one by any means – the track was mega-rough, probably the roughest I’ve ever seen Hawkstone and I’ve been riding there since I was a kid. I loved it – the rougher the better!

“I’m not a fan of having to go off the gate alongside the 450s because it’s so unfair but it’s the same for all of us so you just need to get on with it.

“The second race was great. About four laps from the end I was seven seconds behind Josh Gilbert and I crossed the finish line side-by-side with him so it was good for myself and the team. Onwards and upwards.”

Team boss Dave Thorpe was delighted with his riders’ performances.

“It’s been a really good day,” he said. “The boys rode well in really difficult conditions and the second race in particular was very tough.

“Jake rode a textbook opening race. He got the holeshot, pushed hard to make a gap and won it quite comfortably. Tommy was in a bit of a dogfight with Dylan Walsh and Brent Van Doninck – I think he pushed really hard to get them and then tightened up a little bit.

“In the second race it was very close. Van Doninck made a move four laps from the end but Tommy, Jake, Harri Kullas and Evgeny Bobryshev were all fighting hard which made it a really good race to watch.

“I’m delighted for Steven – second overall is a great result for him. In the first race he thought the roll-off pulley on his goggles had snapped so he came in for a fresh pair and lost several places but battled back to fourth and in the second race he closed right in on Josh Gilbert and there was nothing between them when they went over the line.

“Ryan, Will and Rob have all worked really hard, as have all three riders and it’s nice to get a great result on our first race back. The MX Nationals team deserve a massive pat on the back for taking the risk to put the meeting on in very difficult circumstances.”