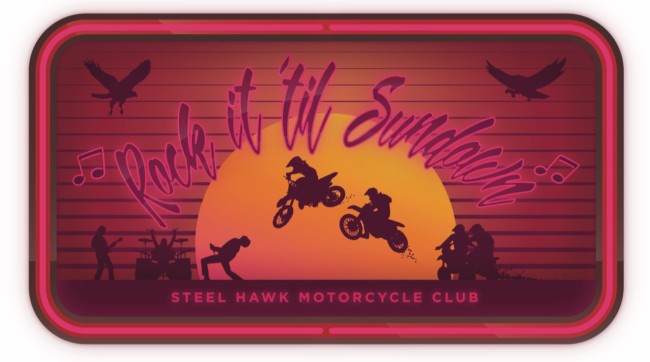 After several years of ‘thinking about it’ there’s a new summer evening motocross event in the pipeline, confirmed for Wednesday 15th August and a new MX club to boot. Jeff Perrett, Julie Coyne and Paul Oughton have joined forces to form the “Steel Hawk Motorcycle Club” which will host the inaugural “Rock it ’til Sundown” event at Tincleton MX circuit, near Dorchester in mid August.

The trio, who have many years of experience between them either racing or running off road and MX events, are excited about the event and building on it for the future as Jeff explains. “Effectively this has been on the cards for over 14 years. It’s not something we’ve suddenly decided to do on a whim or rushed in to, put it that way. After Julie and myself were involved as an integral part of the organising team that Rob Bradley put together to run that first MXGP on the Isle of Wight in 2004, Julie and I have remained good friends and we have always said since that epic weekend that one day we’ll do our own event. Obviously nowhere on the scale of running a GP, that’s huge task, more than most people imagine, believe me. My hat’s tipped to anyone who takes one on! We’ve got no interest in doing anything near that magnitude.”

“We always said we’d do it when we both felt was right for us and that time is finally now. We came close to doing it last year but we both had other commitments that came about just when we were thinking about it. Since then I got chatting to Paul about it and it was clear he shared our vision. He didn’t take much convincing to get involved! He’s run plenty of events himself, is relatively local to us both and is always positive and keen to improve the sport and do something different. So here we are, ‘Steel Hawk Motorcycle Club’, and ready to get it started and see it grow into something we’re all proud of.”

The initial concept of the event was always to have a midweek event, what with the MX and Off Road calendar being so stacked out with racing most weekends. Coupled with the fact that the trio wanted to keep it local to them what with their other commitments and traveling and also grow an event where maybe ‘locals can come out and see what motocross is all about for a couple of hours without changing their weekend plans’.

“We’re starting this slowly and will grow it little by little. It’s a long term plan, it has to be for it to become what we want it to be.” says Paul. “All three of us have a clear plan and vision on the future of ‘Rock it ’til Sundown’ as well as the club itself. We don’t want it to be a flash in the pan. We definitely want this event to become a regular, annual date in the British MX calendar. Here in the South and South West area there are a lot of MC Federation clubs, I personally know a lot of people that are members of those clubs, and we all have a good relationship with the MCF so it was a no brainer for us to affiliate with them.

“We absolutely didn’t want to run an event on a weekend, what with so many events on weekend’s throughout the year and we’ve all got other commitments anyway, so the decision to do a summer school holiday, midweek event was always going to be for us. We would like riders and families to come out and just have a great social event without the pressures of championship racing. From the small kids up to the adults and even pros. We’re even opening it up for a minibike class too. We would like everyone there to go home refreshed in their mind why we all love the sport.”

The racing schedule will be like most weekend events, with practice starting at 9am in the morning, but with racing scheduled to go into the evening that’s where “Rock it ’til Sundown” will be that little bit different. Then when the racing is done, there will still be some good times to be had as Jeff explains.

“We’ve chewed the fat over this one over several meals, beers and glasses of wine that’s for sure! It was great just reminiscing and that brought it home really. We’ve chatted loads about what motocross means to all three of us and those memories of when we were kids or the days that were memorable because of the vibe of event and not just the racing. That’s what we want everyone to feel. A long summer day doing what truly makes you happy, where you forget the monotony or stresses that everyday life throws at you just for a short while. We’re fully aware the sport and society has changed a lot, but the principle of getting out with your family and friends that shines through in a film like ‘On Any Sunday’ doesn’t seem to be so prominent at some events these days. It’s all got a bit serious when it really doesn’t have too. We want to run a good, safe event on a track that will provide great racing for all levels. We’ve considered other venues, but Tincleton shone through in the end. It has brilliant dirt for motocross and the scenery is great. With the sun setting over the backdrop of Puddletown Forest it’s a nice place to be regardless of the fact it’s a superb motocross track.”

“Then to add a bit of spice and to give it a competitive edge, because let’s face it, a race is a race, we’re going to take the top 12 overall from each class after their three races in the day and then shorten the track for the evening and have winner takes all sprint races. That way, everyone will get a decent days racing for their entry fee but it gives everyone something to shoot for. Hopefully those who didn’t make the finals will hang around and watch some decent, intense races that will come thick and fast like an Arenacross. Then when the racing is done, everyone can hang out, sit down on some hay bales and listen to the band and sink a few cold ones whilst still bench racing about their day. We know it’ll be a ‘school night’ for most of the adults, but every so often it’s good for your soul not to think about tomorrow. That’s the vibe we want to try and create, the here and now and life is for living.”

Entries are now open on http://www.mcfederation.com/events/steel-hawk-rock-it-til-sundown-2018